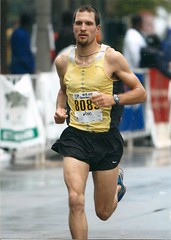 Lifelong running goals:
I guess the biggest “lifelong” goal is to be able to run for a long, long time. In terms of performance goals, It’s really satisfying when races reflect the training and effort that I’ve put in. Although that doesn’t always happen, it’s a great feeling when it does.

Biography:
I was born and raised in Birmingham, Alabama. I went to college in Asheville, NC and Olympia, WA, where I studied eco-design, met my wife, and adopted my long time companion, Little Bear (a Lab/Australian Shepherd mix). I’ve had the opportunity to live and train in many beautiful places. In each location, running has been a constant. I am grateful for each day that I am able to push my body, become immersed in the surroundings, and overcome the challenges of training and working.

2011 Season summary:
2011 was a tough year in terms of running. It began with a fall during the Mt. Mitchell Challenge at the end of February, where I dislocated my shoulder. I was able to rehab and get somewhat race-ready for Traprock 50k in CT in mid-April, which was a successful race in terms of the shoulder and getting rolling again. I followed that up with the 50k leg of the Bear Mtn NY North Face Endurance race in early May. The race, overall, went well, but I jammed my ankle about halfway through, leading to issues that left me hobbled for most of the summer.

I tried to recoup enough to run the Pisgah Mtn. 50K in NH in October. The ankle did ok, but I definitely felt the effects of limited training. It was a disappointing finish for me and reinforcement of the importance of a solid training base, which I was lacking. The upside to a turbulent running year is that I gained a real appreciation for just being able to go for a run, period. Cycling’s great, but… I’ve also learned to listen more closely to my body for signs of wear and tear.

Proudest running accomplishments:
I had a coach once tell me that it’s worthless to be the king of training if it doesn’t transfer to races, which is absolutely true… but some of my proudest accomplishments come from gnarly training runs, where the weather is awful, the legs are toast, and everyone else has gone home. To me, those experiences define what it means to be a runner.