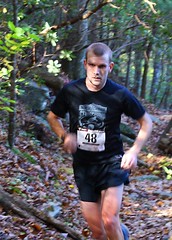 Running is my passion, my adventure, and my escape. There is nothing better than forgetting the fast paced world and hitting the trail to push my body to the limit, converse with fellow trail runners, or just daydream aimlessly.

After my collegiate running days at Tennessee Tech University were finished in 2003, I continued to race full throttle – only it was on the competitive cycling scene. After several successful years of cycling, including winning the Tennessee State Championship series in 2006, I decided to unleash the running beast again in mid-2008. I battled through a hamstring issue after the initial switch back to running, but was quickly able to find my running legs by the last quarter of the year to produce some good results in 2008 and carry that momentum into 2009.

Lots more I haven’t dreamed up!

2010 Races and Past Accomplishments:

2009 Races and Past Accomplishments: