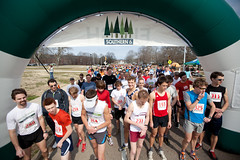 The 2011 Rock/Creek Trail Series is here! Sunday marked the first race in the season, the Southern 6 at Southern Adventist University. The Southern 6 is our most family-friendly event, and to call this year’s weather “fantastic” would be an understatement; temperatures reached an unseasonably-warm high of 67 degrees! 171 of this year’s 182 participants finished the race, and the second running of the Kid K was a sight to behold.

Men’s overall winner Jacob Bradley — from Ringgold, GA — absolutely destroyed the previous race record of 27:01, crossing the finish line in a blistering 25:54. In fact, both Jacob and second-place finisher Andy 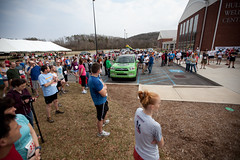 Highlander managed to beat the old mark. For such a short course, knocking 1:06 off of the existing record is a huge jump! Speaking of shattered records, Patrick O’Brien was the top finisher in the 18-and-under Men’s division, and his time of 28:43 is a full 2:05 faster than the previous record for that category.

Complete results from the 2011 race are now available, and Rock/Creek would like to officially congratulate the overall winners in all six of the event’s categories: 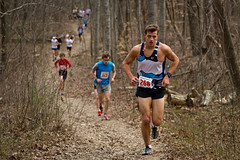 This year’s race, the third annual event, raised a total of $3300 for SAU’s Outdoor Leadership Program. We would like to extend special thanks to Capital Toyota & Toyota of Cleveland for their generous contributions to the Rock/Creek Trail Series, and proudly welcome them to our list of sponsors. In addition, check out the new Rock/Creek Race Team vehicle, a 2011 Toyota 4Runner donated by Toyota of Cleveland! Here at Rock/Creek, we’re having no luck prying co-owner Dawson Wheeler out of the driver’s seat:

“I’ve been driving Toyota vehicles for years, but currently I’m loving the 2011 Toyota 4Runner,” he says. 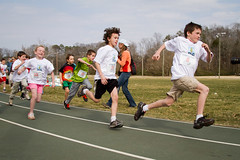 “The ride is smooth and powerful, and I am amazed by the gas mileage I’m getting. I feel safe in this SUV no matter the driving conditions.”

The next race in the 2011 series is the Rock/Creek River Gorge Trail Race, on Saturday, March 26. This race has 10.2-mile and 6.5-mile options, and takes place on the gorgeous Mullens Cove Loop Trail in Signal Mountain, TN. Expect incredible views and technical terrain. If you’re unfamiliar with the event, this video from last year’s race is a good place to start, or you can view all of the details here.

Photos that accompany this article were provided by Southern Adventist University students.

For a better idea of what our Southern 6 Trail Race is all about, here’s video from the 2010 event: