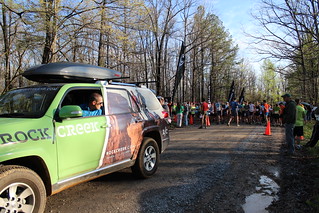 Another Rock/Creek River Gorge Trail Race has come and gone, and this year’s event — the 12th running — featured the largest field of runners in race history and maybe the nicest weather we’ve had for this annual late-March event.

The story of the day, of course, was the disqualification of the first two runners. Rock/Creek Race Team member Johnny Clemons and local runner Calvin Cofield unintentionally cut a complicated section of the course just before the Snooper’s Rock aid station, and the volunteers there tried to let them know what had happened as they sped off.

Clemons, realizing the mix-up would result in a DQ, continued onward and decided to just enjoy a run in the woods; Cofield, unfortunately, did not hear, and only learned of the disqualification when he reached the finish line! Tough break for both runners, who were having a great day on this slick and rocky course, and we’re delighted to see that both kept such a positive attitude despite the disappointing result. 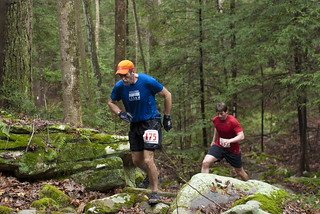 Race photos are available now from the following photographers:

Official results can be found at the following links: 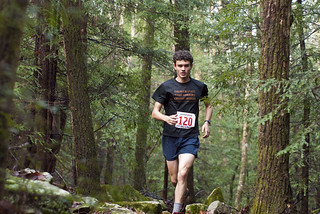 If you enjoyed the race, or simply love the sport of trail running, we ask that you support our sponsors, who absolutely make these events possible. For 2012, Salomon is the title sponsor for our trail series, and that’s why we’re able to have some demo Salomon shoes available for use during the races!

We’ll also be doing some training runs throughout the year where you can try out Salomon trail running shoes. Right now, these demos feature the Salomon Speedcross 3 and Salomon XR Mission shoes, and we definitely had quite a few of those demo shoes out on the course Saturday.

Along with Salomon, some other major sponsors stepped up in a big way. Collier Construction and The North Face, specifically, took ownership of the aid stations at Snooper’s Rock and Haley Rd, creating a festive and encouraging atmosphere that several runners commented on.

Toyota provided those 4WD Rock/Creek vehicles you saw at the starting line, and they were indispensable for leading the racers down a convoluted series of old roads at the start, right back to the singletrack. Get Out Chattanooga, Patagonia, SmartWool, Greenlife Grocery, and Hammer Nutrition all go above and beyond for these races, and deserve everyone’s support in return.

Speaking of our The North Face aid station, every trail race has some unique stories… but perhaps my favorite from this year is that of Jeff Nix. Jeff had never run a trail race before, and signed up for the 6.5-mile event. Unfortunately, it sounds like he didn’t read our race details document or racer email, and he accidentally lined up with the 10.2-milers! At the Haley Road aid station, our friends at The North Face report the following exchange occurred: 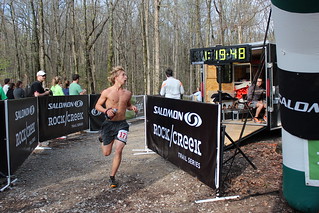 And with that, Jeff continued on up the switchbacks and into the rock gardens beyond, finishing the 10.2-mile trail race in just over 2 hours. Not bad for someone who had never run 10 miles before! We normally don’t transfer finishing times from one race to another, but we’ll grant an exception in this rather amusing case.