The 9th Annual Rock/Creek StumpJump 50K and 11 Miler invites new names to the top finishers legacy for 2010. More than 800 trail runners arrived on Saturday October 2, 2010 for an enthusiastic and competitive day of running in the woods. Supporters, fans and race crew witnessed some close calls on course record results for this year’s 11 miler and 50K. 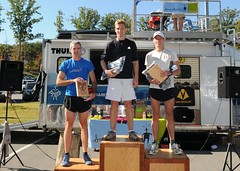 At the sound of the starting call, race participants began the battle for first place. It was a beautiful morning with clear skies and a nice starting temperature of 55 degrees.
Starting with the 11 miler results: Living in Chattanooga and establishing his reign on the trails for first place men’s overall was Jack McAfee with a time of 1:22:13 and breezing in shortly behind him was returning competitor Theodore Towse from Nashville, TN with a time of 1:22:29. Towse shaved off 3 minutes from his first place winning time in 2009 of 1:25:41. Coming in third place men’s overall was Michael Green from Chattanooga, TN with a time of 1:25:25. 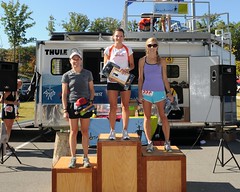 If you blinked, you missed the top female’s stealth-like stride to the finish line. Lanni Marchant from Okemos, MI pounded last year’s winning time with a quick 1:28:33 for First Place Women’s Overall for the 11 miler. Although quick, it still cannot be mistaken for the known course record established in 2007 by Marie Domin with 1:18:46. Coming in second with a time of 1:45:14 was Shanna Hutchinson from Aspen, CO and Third Place Women’s overall goes to Misty Griffin from Birmingham, AL with a time of 1:49:43. 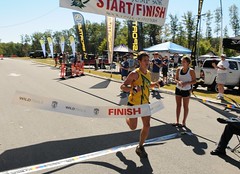 Quite possibly the most nail biting, edge of your seat, waiting game we have experienced was waiting for our 50K finishers. With rumors flying via phone and walkie-talkie, the crowd gathered to welcome the following race talents to the podium:
From Elkin, NC and representing La Sportiva, Jason Bryant won overall with a time of 4:21:00. Mark Lundblad from Swannanoa, NC with Team Inov-8 finished second with a time of 4:26:28. With no sight of the 2009 reigning champion, Josh Wheeler from the Rock/Creek Race Team, the Third Place Men’s Overall was claimed by Nick Selbo from the Rock/Creek Race Team. Selbo finished with a time of 4:30:56 and says “I have only run this one ultra twice, but there are plenty of guys who will agree this is the toughest 50k in the south. Just brutal.” Wheeler had maintained a lead until the very end of the course, when he realized he did not have the legs to successfully finish his attempt at a sub-four-hour finish. Wheeler promises to be back next year to try again to break the four-hour mark.
The 50K Female Finisher’s podium has a second fastest course time to add to the charts. Alison Bryant from Elkin, NC came in at a remarkable 5:11:00. The course record still belongs to Rock/Creek Race Team Member, Kris Whorton with 4:50:39 back in 2006. Roxanne Zobava took second with a time of 5:40:29. Roxanne is a new addition to the Rock/Creek Race Team and represented out at last month’s Gore-Tex TransRockies Run with a Third Place Overall finish with teammate Jaclyn Greenhill [Read about the Rock/Creek Race Team at TransRockies HERE]. Third Place Women’s Overall goes to Jennifer Rinderle from Atlanta, GA with a time of 5:41:50. 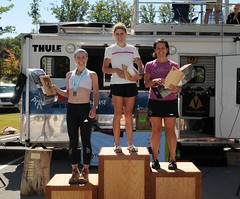 The day couldn’t have been any more beautiful atop Signal Mountain as families, friends and trail running enthusiasts all relaxed under the umbrella of community. Rock/Creek offers a special thanks to Race Director Jonathan Mobley and all our sponsors for your help:
Vasque, Salomon, Patagonia, Marmot, The North Face, Keen, SmartWool, Deuter, Outdoor Research, Hammer Nutrition, La Sportiva, Columbia, Skullcandy, Toyota of Cleveland, Greenlife and all the volunteers.
We look forward to an exciting finish to 2010 with more trail runs from the Rock/Creek Trail Series. Sign up for your first or your hundreth. We can’t wait to see you out on the trails!
Preliminary StumpJump 50k & 11 mile results >
Take a look at some photos of the day, on Rock/Creek’s Flickr page by Rachel Tucker >
(more to come soon)
Follow the race and share your race reports and photos on the Rock/Creek StumpJump facebook page.
* Official Results to come *