Nothing makes my inbox happier than the arrival of a race report from the one and only Jim Farmer, Rock/Creek’s very own race team screwball. Here’s his unique (of course) take on the Scenic City 1/2 Marathon!

It’s the End of the World As We Know It, and I Feel Fine 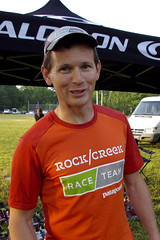 I, like Harold Camping, have a love for numbers. Unlike Sir Harold, I’ve parlayed my “geekitude” into a career in engineering and software development, rather than spending my days calculating the exact hour of the apocalyptic horrors that will be rained down upon the heathens, dishing out their comeuppance for a lifetime of… well, living. Harold crunched the numbers and said that May 21st, in the year of our lord, two thousand and eleven, would be the day of the Rapture. The faithful would be vacuumed up into the sky as the heavens parted and the hand of God wretched down to the earth, or something like that.

This was also the day of the Scenic City Trail Marathon and Half-Marathon. Coincidence??

About two-thirds of the way through the Half — when, once again, the hubcaps had flown off and the lug nuts were rattling — I would’ve taken any sort of divine intervention, no matter which direction I was being sent. Suffering up another steep rise on the course, I thought of Jerry Clower’s “Coon Huntin'” bit. John Eubanks gets into it with a “souped up wildcat,” (aka a jaguar) while trying to tree a coon, sans coon dogs. John, determining that he’s bitten off more than he can chew, hollers at Jerry: “Shoot up in here amongst us. One of us gots to have some relief!”

Once again, I too was biting off more than I could chew, and some scatter shot to the temple sounded like a treat. But, like John, I finally gots me some relief, but only after a heck of a lot of pain and suffering.

I’m typing this on my souped-up cell phone, sitting on a rock directing racers at the trail split for the marathoners, giving directions and encouragement to the zombified runners battling the miles and heat. My mind drifts in between runners and I’m starting to think about the search and rescue efforts in case they can’t find some of the racers. What if they were “raptured?”

If you read my last piece of drivel, you’ll remember that I’ve been riding the roller coaster of life as of late. Although I’ve reached the end of the ride and stepped back onto solid ground, I’m still paying for the ups and downs. I’m a little dizzy and somewhat nauseous, but I know that it won’t be long before I fully recover. I’ll still hop on the Cyclone or Space Mountain from time to time, because that’s what adrenaline junkies do. But it’s time to get back to the things I’m passionate about. More importantly, it’s time to reconnect with the people that make me a better man. I know, it’s sappy, but it’s amazing how one can put blinders on and not see the forest for the trees sometimes.

Speaking of forests and trees, the trail racing community is like a second family to me. Like a good family, they’ve taken this Prodigal Son back into the fold without hesitation. If the world’s gonna end today, then these are the last people I want to see. So bring on the fire and brimstone, Mr. Camping. As Billy Joel says, “We’ll all go down together.” If we’re taking a trip on the up-escalator or the down-escalator, either way, I’ll be with the people that complete me. Now that’s my idea of heaven.

If this is the first time you’ve read one of my “race reports,” you’re probably wondering when I’m gonna get to the “race” part. Well, writing about that stuff is for the fast folks that actually win these things. I write this stuff because it’s cathartic for me and entertaining to some (although they’d deny it to save face). Oh yeah, it’s also part of my “job” as a proud member of the Rock/Creek Race Team. I may not be winning races these days, but serving as Court Jester keeps me looking resplendent in my team gear year after year. Everybody has their niche. But, I guess I should talk about the race for a bit. So, here goes:

Squeezing into the start chute with thirty seconds to spare and not a care in the world is how I roll these days. The front section had a sign that said “6 Minute Miles,” with minute intervals stretching back as far as the eye could see. Almost five hundred racers were packed in like cows being led to slaughter. In true wise-guy fashion, I asked where the “5 Minute Mile” racers started, getting a chuckle from most and a few stink-eyes from the “Who is this guy?” contingent.

A helicopter with photographers and videographers filming the race flew overhead as the gun went off and the mad dash for the “hole shot” began. Heart in my throat and legs burning, thirty seconds into an hour and a half long race, with a helicopter flying overhead filming the carnage, I thought to myself, “Self, what’s a poseur like you doing up here with these studs?” 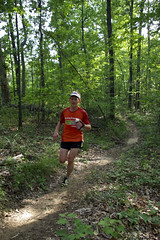 Hey, confidence mixed with a little stupidity is all I’ve got these days. Hanging on to the back of a fast pack for the first few miles, pacing myself on the ups and bombing the downs to catch back on, I dropped racers who were breathing a heck of a lot easier than me. Knowing the course like the back of my hand, I managed my energy expenditures to a T, once again beating people I have no business beating. Squeezing out another top ten made all that pain and suffering worth it.

Unfortunately, the Rock/Creek Trail Race Series has changed the age groupings, so that the Masters category was now forty-five and over, rather than forty and up. At forty-two years young, I’m racing against rug-rats a third of my age. I’ve got underwear older than these brats, but I guess I’ll just have to deal with it for another two years. I squeezed out a 1:32 and change, but I’d need to lop off a minute per mile to podium in this race as an open-class competitor. That’s a tough row to hoe for sure, but I’ll give it a whirl.

Obviously, the Rapture did not occur as predicted. But I did wonder if I should go to confession just in case. You know, cover all the bases and seek absolution for my trail running transgressions.