Please contact Sen. Corker and ask him to support modernization of the 1872 Mining Law. 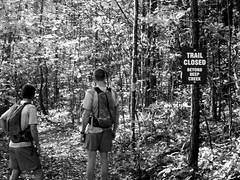 A lot happens in 136 years. Since then Edison won the first patent on the light bulb, Ford set up his industry changing assembly line, World Wars have been fought, voting rights have been granted to women and minorities, and computers and cell phones have changed the way we do business. Certainly a lot has changed, but unfortunately, a lot hasn’t.
In 1872, the government of an expanding nation was in search of ways to entice adventurous explorers and entrepreneurs to head west and cultivate dangerous lands on the other side of Mississippi. With grand visions for the future of a young nation and the storied abundance of natural resources that were embedded in untouched lands, congress enacted a law permitting miners equipped with pick and shovel to excavate hard rock minerals without paying royalties on the precious metals that they removed. It was a decision that laid the foundation for the future of the young nation.
A lot has changed in the mining industry in those 136 years. Individual miners have been overcome by multi-million dollar corporations. Picks and shovels have been replaced by fleets of heavy, highly efficient and productive machinery. Advanced technologies have granted the ability to dig quicker, deeper and in more areas than was ever imaged possible. Additionally, fueled by unprecedented demand, prices for the commodities have risen exponentially and pushed profits to levels surpassed by very few industries. All this has begun to strain our public lands – with blazing efficiency mining claims in some regions have grown 80% in recent years.
Unfortunately, a lot hasn’t changed in the mining industry. The unbelievable truth is that the federal law enacted in 1872 is the very same law that governs the industry today! Much like in 1872, mining organizations are still not required to pay royalties on any of the precious metals and other valuable materials that they extract. Relative to the amount of realized profits, companies pay very little for the land they mine on. The price tag for each acre of land that mining companies privatize is a scant $5. The next time you are filling up your gas tank, think of what $5 gets you. Not quite the same purchasing power it had back in 1872. And here is the kicker! Think that companies are require to clean up the mess they make, well don’t count on it, not according to the antiquated law passed in 1872.
It is irrational and irresponsible that the same laws that governed the nascent industry more than 130 years ago still govern today. Many in congress are finally coming to this realization. Late last year the House of Representatives voted to pass the Hardrock Mining and Reclamation Act of 2007. This act institutes a requirement for companies to pay royalties, authorizes the denial of mining permits if undue environmental degradation is anticipated and requires land managers to balance other valuable land uses with mining. (Under the current law, mining is considered the land’s highest value and thus trumps all other activities. Under the House’s proposed law recreational activity, species protection, biodiversity preservation, water quality conservation and other uses would be put on par with mining).
Now that this important law has passed the house, it is onto the Senate where members will decide if the bill will ever reach to desk of the President. At this point it it unclear where the Senate’s support will lie. Because of our participatory democratic government you can help. Support from Tennessee’s two Senators is important to the future of the bill and the future of our lands. Sen. Corker’s support is particularly important. He is a member of the Energy and Natural Resource Committee, and it is this committee who will first review the bill before it goes to the Senate floor. Please contact Sen. Corker and ask him to support modernization of the antiquated 1872 Mining Law.
Many Tennesseans remember the environmental disaster that occurred at Copper Basin because of irresponsible mining. Help protect our lands, and our tax payer dollars, by learning from the past and demanding that the 1872 Mining Law be updated.