Expedition Y member Fynn Glover, in collaboration with Rock/Creek, is traveling the country, trail running and talking about outdoor recreation with members of his generation. For a more in-depth understanding of the questions Fynn hopes to answer, read his article here.

Fynn has been corresponding with us about his trip on a regular basis, and we’ve decided to publish these “journal entries” for our blog readers. Check back every Friday afternoon for Expedition Y updates! 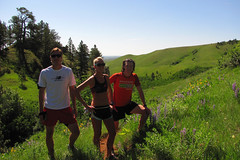 From Toronto, we drove to Munising , MI to run in Pictured Rocks National Lakeshore. The Upper Peninsula was cold and wet when we arrived, and we camped near the beaches of Lake Superior. We did some hiking that night and the next morning and spent the following day in a warm bookshop/coffee house in Munising, fueling for our run and catching up on computer work.

We arrived at the North Country National Scenic Trail at 5PM and set out on a ten-mile loop that would become perhaps the most beautiful run of our entire lives.

After 3 miles on soft double-track in the thick, northern woods, we emerged onto the beaches of Superior, where we were greeted by Chapel Rock, a looming spire of sandstone, isolated from the cliffs behind it, by thousands of years of erosion. We ran on… The next five miles curved and snaked along the ledges of sandstone cliffs that rose between 50-200 feet from Superior’s turquoise waters below. Every few hundred yards we would come across new panoramas that we could not help but photograph.

The trail itself mixed the smooth soft dirt of the forest, with deep sand of the beaches, with portions that slalomed through tight saplings and their roots. It was a joy. We finished our ten miles tired, but full of wonder, and we were grateful to have had that experience. When we pulled into camp an hour later, we realized that our Go Pro had run out of battery.

We knew we had to get that run on video, so we prepared ourselves mentally, and the next morning, after an unforgettable night of listening to wolves howl in the distance, we rose early and ran the trail again to capture its beauty on film. We finished, exhausted but happy, ate again at the friendly cafe in Munising, and set out through heavy rain to Chicago.

We spent the morning in Madison, WI updating our blog and responding to emails. We printed surveys in the Public Library right next to Wisconsin’s recently embattled capitol building, before setting out to canvass. Before finding many students, we came across a pick-up soccer game with men ranging from 18 to 60. We are all former soccer players and played with the joy of little kids, scoring plenty of goals. After interviewing every student we could find in Wisconsin’s student center, we drove west toward Minnesota, Minneapolis being tonight’s resting spot, before we jet out tomorrow across the plains of South Dakota to Badlands National Park. 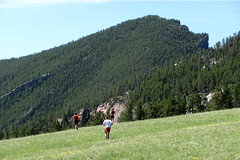 On the drive to Minneapolis, we pulled impulsively into a driveway, advertising husky puppies for sale. We would have purchased one, were it not for the fact that the puppies had contracted some bacteria, which caused them to diarrhea every few minutes. The man had 11 children, and had been recently laid off. He had also torn his biceps tendon and would not be able to put fence around his farm, as he had planned for this summer.

We pulled into a hostel in Minneapolis an hour ago. After we told one of the guests our names and that we were from Chattanooga, a young woman from across the room approached. Her name is Sarah Ray. She worked for Rock/Creek for six years. She’s in Minneapolis for a conference on sustainable food co-ops. She asked all about our trip and sends her hellos to the Rock/Creek family. Always stunned how small the world can be. 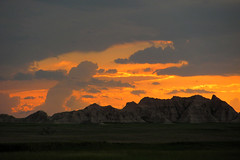 We arrived in Badlands National Park in time to witness a violently beautiful sunset, made all the more powerful as a colossal lightning storm moved in upon us across the plain from the horizon. We spent the night under torrential rain and hail, as thunder clapped overhead, and lightning danced through the skies. The lightning storm was one of the most powerful and beautiful things I’ve ever witnessed, and I was intimately aware of my own smallness in the face of such immensity.

The weather continues to be volatile and lightning has forced us into a roadside diner, where we’re inputting survey data… and antsy for a run. 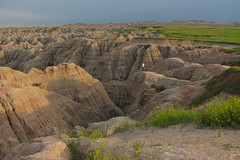 We left the lightning and thunder of the Badlands and drove west through the Black Hills and on to Saddlestring, Wyoming. Saddlestring consists of two entities: HF Bar Ranch and the Saddlestring Post Office. We stayed on the ranch with friends from Chattanooga and did dishes in return for room and board. The beauty of this place felt beyond my capacity to adequately describe: high rolling meadows, with yellow and purple wildflowers, aspen groves, Rock Creek which cuts valleys through the hills and supplies the ranch with trout, jagged rock formations and canyons… all at the foot of the Bighorn Mountains. We were in awe.

The ranch employs about thirty young people, who return year after year to experience the ranch’s startling beauty. We engaged many of them and discussed Expedition Y, and we may have developed a collaborative partner for the future. Jen Lagedrost is a former collegiate runner, now pursuing a Master’s in Creative Writing. She led us on another inspiring trail run and we spoke at length about the translation of our running commitments to our professional goals. We have invited her to partner with us through a guest blogging presence, as well as through further areas of potential collaboration in the future.

We left Buffalo in high spirits and drove through the Bighorns and the Wind River Canyon toward Grand Teton. We arrived in time to catch the sunset over the peaks and listened to Dire Straits as we drove through the National Elk Refuge. Today, we’re running in Grand Teton National Park and catching up on computer work (data entry/assessment, blog updates, emails, trail planning, etc).