Fynn Glover’s “Expedition Y” is sponsored by Rock/Creek, and they’re about a third of the way through their journey. Here are his thoughts from the past week.

Thoughts on the Columbia River Gorge 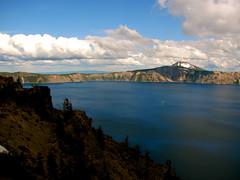 Having traversed 9,000 miles of this continent in the last month and a half, I have been exposed to natural beauty on scales that I am ill prepared to describe fittingly.

From Virginia’s Shenandoah Valley at sunset, to the deep gorges of upstate New York, to Maine’s rugged coast, to Michigan’s upper peninsula, to the majesty of the Tetons, to the awesome power of Glacier, to the turquoise glacial lakes of the Canadian Rockies, to the haystacks along the Olympic Peninsula, this adventure has provided beauty and reverence on an immense scale. The Columbia River Gorge is no exception, and it remains one of my favorite places on earth.

The gorge is 4,000 feet deep in places and stretches 80 miles through the Cascade Range, forming the border between Washington and Oregon and connecting the Columbia River Plateau to the Pacific Ocean. Its wide range of elevation and precipitation create a spectacular array of diverse ecosystems, ranging from temperate rainforest, to transitional woodland, to arid grasslands. In a mere 2 hours, we hiked and waded through the moist and moss-covered Oneonta Gorge, before trail running through golden, grassland flanks, which overlook the gorge and provide breathtaking views of Mount Hood, a towering 11,000 foot volcano. Differing atmospheric pressures throughout the gorge create strong winds, and the area is a major hotspot for windsurfers and kite-boarders. Watching these athletes sale across whitecaps and float up to twenty feet in the air is a joy.

As the only navigable route through the Cascades, the gorge has provided human beings with an important transportation corridor for thousands of years. American Indians have traded here for over 10,000 years; Lewis and Clark used it to reach the Pacific in 1805; and early American railroads and steamships established routes, linking the country’s interior to the Pacific.

After finishing a beautiful sunset run that snaked through dense forest and open grassland, along hard-packed single-track, we descended the gorge’s woodland flanks to Hood River, OR, a town flocked to by mountain bikers, windsurfers, and beer enthusiasts. We indulged with burgers and pints of Full Sail pilsner, before driving under a full moon into the Mount Hood National Forest, where we pitched camp and slept soundly.

Our time in the Columbia River Gorge was breathtaking and refreshing after spending a few dreary days in the Portland and Seattle metropolises. From the gorge, we drove into the Mount Hood National Forest and camped in almost freezing weather on the slopes of the great volcano. In the morning, we ate breakfast at the historic Timberline Lodge, which remains one of the nation’s most authentic mountain getaways and provides year-round skiing.

From Timberline, we drove south to Eugene, Oregon’s second largest city and the home of the University of Oregon. I maintain a degree of reverence for this university for the role that it has played in the history of track and field and distance running. Bill Bowerman was Oregon’s innovative coach during the 60’s and 70’s, as well as the coach of the US Olympic track team in the 1972 Munich Games. Bowerman is considered one of the greatest coaches in track history, but he was also an inventor. His experiments with making track spikes from his wife’s waffle iron eventually led to the founding of a little company called Nike.

Bowerman’s best runner was Steve Prefontaine, who ran for the Men of Oregon in the late 1960’s and early 1970’s. At one time Pre held every American record between 2,000 and 10,000 meters, and at age 21, he finished fourth place in the 1972 Olympics. Tragically, he died in a car accident three years later, before his second Olympic appearance. Any distance runner should know the story of Pre…an indomitable competitor whose rebelliousness, charisma, desire to win continue to inspire runners of all ages today. 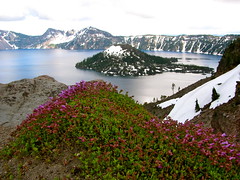 After interviewing students, we drove south to one of North America’s most impressive jewels, Crater Lake National Park. We had hoped to run in the surrounding alpine meadows, which are usually dappled by wildflowers at this time of year, but to our amazement, much of the park was still buried under three to four feet of snow. The lake was created over 7,000 years ago when Mount Kazama erupted, forming a caldera, which filled with snowmelt and rain over the proceeding centuries to create the lake. American Indians of Oregon and northern California have long revered it as a place of spiritual importance. To this day, some Native Americans refuse to visit the site.

The caldera lake is the deepest in the United States and is exceptional for its deep and pristine blue. Light penetrates the water’s surface and is then scattered by water molecules. The scattering of the light then returns to the surface, producing the vivid blue that is unforgettable for anyone who has seen it. 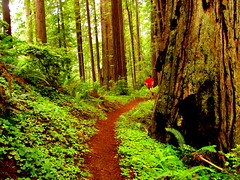 We drove over 100 miles from Crater Lake in search of campgrounds with vacancies, until finally we found one open spot along the Klamath River in southwest Oregon. The campground was restful and we slept well to the sounds of light rain on our tents and the Klamath’s gentle flow a few feet away.

In the morning, we ate what has become our breakfast staple: oatmeal, mixed with honey, peanut butter, and bananas. We drove two hours to reach Crescent City, CA, a small northern Californian town, enveloped to the east by some of the oldest remaining Redwood groves, and to the west by the brooding Pacific.

I have visited Crescent City twice now, and each time, the city has felt skeletal, reminding me of the hollowed out redwood trunks that have washed up on its beaches. Crescent City reflects something sad to me… something run down. Like so many cities, states, and nations blessed with natural resources, Crescent City is beset by the economic realities of cyclicality, over-extraction, and a lack of economic diversification. Once a prosperous logging center, today it seems a forlorn and weary fishing town, and we were happy to pass through quickly and into the Redwood groves.

Redwoods are not only the tallest living things on Earth, reaching 379 feet. They are also some of the most ancient, with lifespans of almost 2,000 years. The remaining groves of these giants, mostly in northern California, provide one of the most profound views of ancient, living history on the planet. A walk through these trees is an eternal experience. It is a walk through natural history. The remaining Redwood forests engulf a human being in prehistoric considerations, and the immensity and silence within is otherworldly. As I ran by myself through the forest, on soft, reddish-brown single-track, I was overwhelmed with humility and veneration.

One of the great tragedies of Euro-American expansion was the failure to restrain industrial logging. Following the Gold Rush’s declaration in 1849, the rapid rise in California’s population and the ensuing demand for natural resources, along with major improvements in transportation and logging technology, culminated in the decimation of 95% of original old-growth Redwood Forest. Put differently, a mere 5% of the original forest that stood prior to 1850 remains today. In fact, despite the founding of the Save the Redwoods League in 1918, it wasn’t until 1968 that Redwood National Park was created, a disconcerting 78 years after the creation of Sequoia and Yosemite National Parks. In 1980, the UN designated the park a World Heritage Site, and today, more than 400,000 visitors enter the park each year.

From the Redwoods, we drove south to San Francisco for an important week of interviewing students at the following universities: Stanford, UC San Francisco, Berkley, and Davis. We’re beginning to see the development of interesting trends in our research. We’re taking a week off from driving, thanks to a friend who has allowed us to stay with her in Sacramento. We’ll be using this time to input the data we’ve obtained from over 500 completed interviews, and we’re excited for the correlations and discoveries that we expect to uncover. On behalf of our partners Rock/Creek, we’re also thrilled to attend the Outdoor Nation Summit in San Francisco next week. Outdoor Nation is becoming a powerful movement to increase youth outdoor participation, and we can’t wait to learn more about the solutions being contemplated to reconnect young people to our distinct natural heritages.