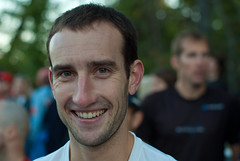 The 10th-annual StumpJump 50k is over and done with, and Cincinnati’s David Riddle exceeded even our lofty expectations for him. Not only did he break the new-course record, he broke the overall race record, and he turned in the first sub-4-hour StumpJump 50k in the race’s 10-year-history. His time of 3:49:52 knocks 25 minutes off of Josh Wheeler’s course record, an astonishing performance that concluded with David pumping a fist in the air as he roared down the home stretch to a chorus of cheers. 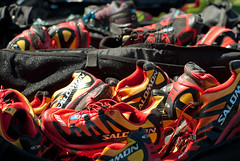 David may have owned the day, but his isn’t the only story worth telling. In his 4th StumpJump 50k, Andy Anderson improved on his three previous top-10 finishes to hit the podium with a 4:07:41 time that would’ve earned a course record if not for Riddle’s performance.

For Rob Apple, this was his 8th time running the Rock/Creek StumpJump 50k and his 600th ultra; he’s 50 years old, started in 1982, and StumpJump is one of his favorite races. Friends Karen Gillies and Wendy Sugg, both 49, ran the StumpJump 50k as their first 50k and a mutual 50th-birthday present. 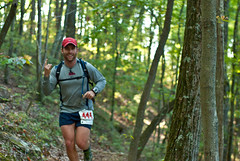 We’d love to hear from those of you for whom StumpJump 50k was your first. Hunter Lane (58th overall), Kate Woodard (76), Charlie Taylor (133) and Jessica Cohen (362) have told us so on our Facebook page… who else is out there with a story to tell? 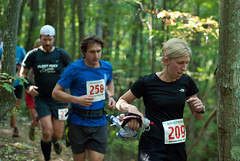 Kudos are due to Rock/Creek Race Team member Jake Bradley — he also works at our 2 North Shore retail location — for winning the 11-miler. This is his first Trail Series win for 2011. 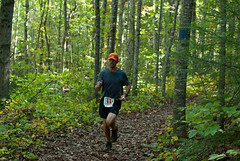 Just want to check out photos from the race? Go here: 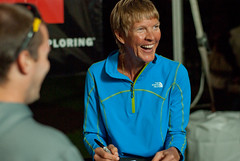 If you missed out on Diane Van Deren’s speech on Friday night after the vendor fair, well… you missed out. Diane is inspirational and engaging and funny, and everyone in the tent was spellbound while she told her tale. “I was lost on the (Chattanooga) Riverwalk this morning!” she blurted, when trying to explain exactly how difficult it is for her to interpret maps and directions after her temporal lobectomy. What a wonderful woman, and what an incredible story.

This race wouldn’t be possible without our many sponsors, and all of them deserve our thanks and support: 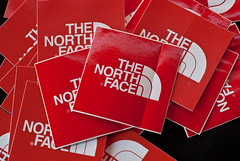 A special thanks is also in order for all of the volunteers who were up early and spent a long day on the course. 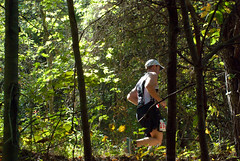 Congratulations to all 50k race finishers, from #1 to #373. Ten StumpJump 50k races are in the books, and we can hardly wait until next year. Will the 2012 StumpJump be your first 50k? Keep an eye on this blog for Andrew Kornylak’s upcoming video from the this year’s race; we’ll post it as soon as it’s available.

As for 2011, the next race in the Rock/Creek Trail Series is the minimalist (and already-full) Upchuck 50k, but it’s already time to start thinking about the Lookout Mountain 50-mile trail race this December. Sign up now, and we’ll see you when the weather gets cold!