On September 26, 2010 along the rolling hills of a quaint town in Vermont, the elite running powerhouse of the Rock/Creek Race Team, Dane Mitchell, was released on the Vermont 50k course. A recent transplant from Alabama to Vermont, Dane recaps his race in the report below. We congratulate him on his first place win and establishment of a new course record of 3:42:52.~Rock/Creek

Race Report
Vermont 50
9/26/10
Rock/Creek Race Team Member Dane Mitchell
The Vermont 50 consists of a 50 mile mtn. bike race, a 50 mile trail race, and a 50k trail race. All three races take place simultaneously with staggered starts. Though it seems like a recipe for disaster, it all fits together surprisingly well- and makes for a really unique experience.
I moved up to Vermont from Alabama a few weeks ago… I had planned to run the Stump Jump 50k in October, but had to alter that plan with the VT job offer and move. The result was this race, which I had been eyeballing since the possibility arose of heading up this way. It takes place around Mt. Ascutney along a mixture of dirt roads, jeep roads, and singletrack. The scenery is stunning, especially at this time of year.
I drove down from Stowe on Saturday afternoon and camped in my truck the night before the race. I awoke on Sunday morning in time to hear the bikers leaving sometime around 6:00. The 50 mile runners were the next to go around 6:30, with our race (the 50k) starting at 7:30. 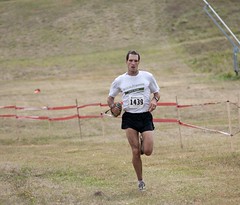 We left from the main events tent near the Ascutney Lodge and exited from the mountain area, descending down a paved road and onto a dirt road that flattened out. It would be dangerously easy to go out too fast on this section and hammer yourself for later. I made it a point to be cautious, knowing that the trails get pretty steep later on. The dirt road soon begins to climb and roll before leading to the first singletrack at about mile 4.
The first sections of singletrack are very runnable with some short steep sections every now and again. The course alternated between these trails, some double track, and dirt roads. We all got spaced out pretty quickly and I was running alone out front. Because the footing wasn’t really an issue and the route was marked so thoroughly, I actually had a chance to look up from my feet and take in the scenery- rolling farmland, vibrant colors, and mtn. backdrops.
At some point (mile 7?), the 50k course veers off the 50 mile course to make a shortcut. It eventually reconnects, then splits again, and connects for a final time with the main course at around mile 12… I think. From there on out, you are racing alongside mtn. bikes, and never come into contact with the 50 mile runners. At that point, the fastest miles of the race are over. Winding and, often, steep singletrack takes over.
I fell into a group of 5 or 6 mtn. bikers that I would stay with until the last few miles of the race. I would pass them on the steep up hills and they would fly by on the descents. It almost always worked out that the trail would widen when passing was in order. The other portions of the trail were so curvy and undulating that we were all moving at about the same speed. I really appreciated being amongst those guys for that portion of the race. It broke up the monotony of the “middle miles” and kept me alert and focused on my tempo…It was also unique to be able to share the suffering without any sense of competition.
The first mileage sign was with 5 miles to go. I had the course record time in my head and figured it was a possibility if I stayed steady. However, I also knew that the last few miles climbed up to above our starting pint on Mt. Ascutney. I wasn’t sure how steep it would be- and that uncertainty was a little uncomfortable at that point in the race.
The climb turned out to be painful, but broken up enough by the switchback singletrack that it was easier to digest than a straight climb. With about a half mile to go, you finally hit the ridge line, run parallel to the finish line, and then drop down a ski slope to the finish. It was nice to let loose down the hill, but probably looked mighty awkward with the uneven footing. As always, I forgot to stop the watch, but soon saw a time of 3:42:52. That was good enough for the record and a bonus to a great day of racing.
This is a race that I would love to do again in the future- or maybe even the 50 miler. It’s probably rare that temps and conditions would be as perfect as this year, but the community surrounding the race and the camaraderie of all the bikers and runners together make for a special event.