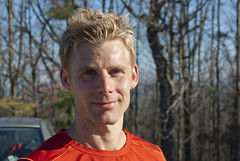 And the winner is: Johnny Clemons. 50 miles in 7:23:04! Clemons extends a string of recent dominance at Rock/Creek Trail Series events that includes a third-place finish at October’s StumpJump 50k and a win at the Upchuck 50 in November.

It always catches our attention when folks travel long distances to participate in a Rock/Creek Ultra, and this race featured plenty of it. For example, Matthew Van Cleave and his father, Howard, made the trip from Columbus, OH to participate. Howard, who is 64 years old, ran the 10k, then hurried down to the Lula Lake aid station with a drop bag for Matt; Matt would go on to finish the 50-miler in 8th place.

As we waited for Matt to emerge from the woods, Howard told me this was not only their first Rock/Creek Trail Series race, it was their first visit to Chattanooga. Hope to see them again soon.

Women’s race winner Debbie Livingston traveled all the way from Hartford, CT with her husband Scott, who finished 16 minutes behind her and 32nd overall. Scott has posted an excellent race report on his own blog, which can be found here.

Being one of the shortest days of the year, this race begins in the dark, and for most runners it ends in the dark as well. In the meantime, we took advantage of the sunlight to snap some photos at various points along the diverse trails (including a few that were quite unexpectedly underwater from the heavy rains on Friday):

For more photos & updates, keep an eye on our Facebook page. 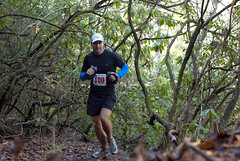 Proof of the recent Rock/Creek Trail Series dominance by Clemons was apparent as he crossed the finish line in his Patagonia StumpJump 50k race shirt, along with a pair of Salomon Speedcross 3s he won at StumpJump, then promptly changed into a pair of Montrail Fairhavens he won at Upchuck and donned a Marmot Zeus jacket he’d also won at StumpJump.

There are definitely easier ways to build an outfit than stringing together podium finishes at long, technical trail runs, but I don’t think Johnny would have it any other way!

Special appreciation is in order for our race volunteers, as the 50-miler is especially taxing on them; after all, the last finisher crossed the line about 20 minutes after 9:00 PM! We are blessed to have so many dedicated people willing to sacrifice a Saturday the week before Christmas and wake hours before sunrise to set up tables and tents in the bitter cold so our runners have the support they need, and we cannot say enough about the time these folks put in.