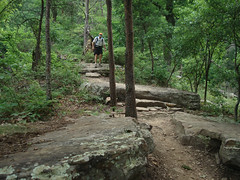 Capt. Scott Griffith sent us this narrative after running all three stages of the 2008 Rock/Creek Mountains Stage Race. Enjoy and if you have a story that you would like to submit send it to [email protected]
Maybe I should have said no.
I received an e-mail from Lisa Purul eleven days before the race. That gave me just enough time to get in my one long run five days out and then start my taper. For those not familiar with this race, it’s a three-day, staged trail race. Each day, runners traverse approximately twenty miles on the scenic trails just outside of Chattanooga, TN.
I should have read the description on the website more thoroughly before agreeing to the race. I still don’t know how far we really ran, but it was long and more challenging than any of the hills we have around here. The trails were on Lookout Mountain, Raccoon Mountain, and Signal Mountain. From the recurring “mountain” theme, I should have been a little more leery.
I replied to Lisa’s e-mail with a “yes,” and Lisa, Paul Brannon, and I headed off to Chattanooga. While Lisa and I were planning to run the first two days of the race, Paul planned only to run one of the days.
For being a small race (probably not the largest budget), you could not have asked for more. Chad Wamack, one of the Rock Creek Racing Team members, arranged our heavily-discounted lodging at a very nice hotel in the middle of Chattanooga. Luckily for us, he also agreed to meet us after breakfast each morning so we could follow him to the race sites without getting lost. I’ve run the Marine Corps, Chicago, and Boston Marathons and never received such an accommodating reception.
After arriving at Lookout Mountain for the first day’s race, we met Kris Whorton–inarguably an accomplished runner. She was the official cat-herder for the race, making sure everything went off smoothly. By the start of the race, she already knew everyone’s name, proving a keen attention to detail. Her bio can be found at www.rockcreek.com/raceteam/#kris.
Off we went the first day, following a bicycle escort for the first bit of the course until we hit the trails. Chad told me the bike would drop me; so, naturally, I had to stay with it until it turned off. And I did. And I paid for it.
After we hit the trails, I had no idea where we were going. I figured I would just follow the guys in front of me. Bad plan. Apparently, the leaders didn’t know the course that well, either, so we took the scenic route. The good news was that the back-tracking was downhill. For those who are wondering, getting lost two miles into a twenty-mile race is not a good start. After that, we were a little more careful and paranoid about following the trail. We continued past the aid station/gummy bear stop (they must have known I was coming) and ran out to Covenant College. When you drive into town, you can see the college perched on top of the mountain, a vantage point that affords it a great view of its surroundings.
Up the mountain, down the mountain, up the mountain, down the mountain.
With .6 miles to go, you hit the one water crossing. You could go around it, but that would be no fun–especially with the photographer sitting there yelling at you to go through it. So I went back and splashed in the water. It probably didn’t help the race time, but I had fun.
On day two, Chad led us out to Raccoon Mountain, described as a flat and fast course. In fact, the course was supposed to be so flat that the official course description included no elevation profiles. Never trust a Tennessee designation of the word flat. The course was hilly enough and overgrown enough that the most mileage anyone recorded on their Garmin was 12.6. The trail was eighteen miles long, plus detours. It was, however, faster than the previous day. The highlight of my weekend came on this day, when I passed one of the mountain bikers on an uphill stretch. As day two came to a finish, I waited for Paul and Lisa. Despite his aforementioned plans to run only one of the race days, Paul crossed the finish line. Lisa followed in short order, and both formed a consensus to hang up their shoes for the rest of the race.
For our third day, Chad led us out to Signal Mountain.
Wait a minute…didn’t we only plan to run two days?
Signal Mountain was, by far, the hardest of the trails. Fortunately, everyone was sufficiently well-rested after the flat course the day before. The times were slow, but you don’t get to run trails like this in Florida. At one point, the trail dead-ended into a rock face where the trail simply went up. The pace varied from less than a crawl to running full-blast through sticker bushes and thorns where you couldn’t see the rocks and roots you were tripping over. By the end of the day, only twenty-six of the thirty-four people that started the race at Signal Mountain finished. About sixty people raced at least one of the races. Paul ran all three races, beating Lisa in only one of the three. He did, however, finish just ahead of her in the overall standings, which made his day. Lisa was second overall woman. And I had fun.
The 2008 Stage Race benefited The Boonies (Wilderness Trail Running Association). Now part of the Rock/Creek Trail Series, this year’s stage race was an incredible experience. It was presented by Rock/Creek and sponsored by Mountain Hardwear, SmartWool, and La Sportiva. Participants received a technical Wicked Tee from Mountain Hardwear. Prizes and raffles were provided as well. For more information on the Rock/Creek Trail series and for dates of future events visit. https://www.rockcreek.com/trailseries/default.asp