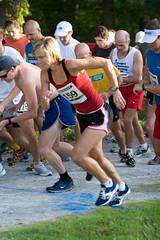 Saturday August 9th proved to be another beautiful day in the Rock/Creek race series. The cool August morning brought 95 runners to Chattanooga’s Greenway Farm to compete on 5 miles of mixed trail that included sections of gravel, grass and paved trail. Though shorter than other races in the Rock/Creek Trail Series, the race was well attended by both beginning and experienced trail runners. Rock/Creek is happy to report that out of 95 total runners 40% were first time trail racers!
Like other races in the Rock/Creek Trail Series, proceeds from this event support the Boonies Wilderness Trail Running Association, a.k.a. The Boonies. The Greenway 5 Mile Trail Race raised money for trail access and future trail races in the Chattanooga area.
Special thanks goes to the City of Chattanooga’s Parks and Rec department for allowing Greenway Farm to be the site of the 6th race in the 2008 Rock/Creek Trail Series. The park was the perfect venue for the short, relaxed race. Greenway Farm, part of the North Chick Greenway, is one of Chattanooga’s premier green spaces, if you haven’t had the opportunity to to spend an afternoon on the park’s comfortable trails, Rock/Creek encourages you to do so.
Rock/Creek would like to additionally thank event sponsors Mountain Hardwear, SmartWool, La Sportiva, Hammer Nutrition and Greenlife Grocery. As always, a special thank you goes out to the individuals from the Rock/Creek race team and the Boonies who dedicated their personal time to the event and its preparation. 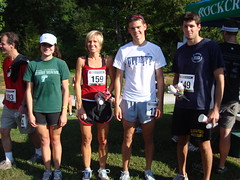 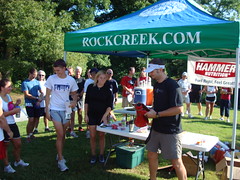 Next up is the grand daddy of the Rock/Creek Trail Series; the 8th annual Rock/Creek StumpJump 50k. For those who have run this one in the past you know it’s a race that can’t be missed. Already about 350 runners from across the country have signed up for this popular event. For runners looking to put in less mileage there is a 11 mile version of the race as well. Both races will take place on October 4th, with a vendor fair and packet pick-up at Rock/Creek’s Two North Shore location on October 3rd. Information and registration are online at https://www.rockcreek.com/stumpjump/.