“Patience, patience, and more patience. Keep it simple—it is a very, very long run in which the greatest goal is to just finish. Therefore, divide the course into multiple shorter runs (aid station to aid station) and adjust your in-race goals accordingly. There will be highs and there will be lows but consistent mental fortitude trumps 200 miles-a-week training every single time. Oh, and be patient.” — 2012 Leadville Trail 100 Race Guide 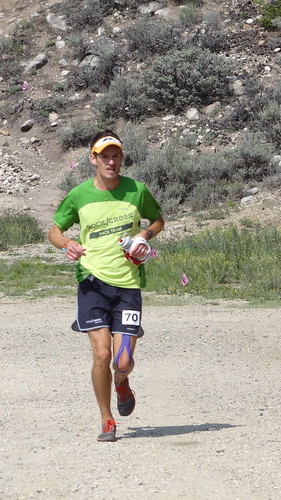 1. I would be kidding myself if I said that I was not a little disappointed with my result at the Leadville Trail 100 a couple of weeks ago. Coming off of a personal best last year, as well as experiencing a year of consistent running and races in the more running-friendly climates of the South, I felt extremely comfortable heading into Leadville. I even went so far as to download Guns N’ Roses “Greatest Hits” as extra musical incentive to accompany the billowing swell of anticipation that accompanies the race week build-up. Nothing like a little wailing Axl-in-his-prime to nourish the adrenaline-soaked soul. Plus, it would also be my secret weapon for the double-crossing of Hope Pass when I picked up my iPod in Twin Lakes @ mile 40. Infallible… in theory.

2. The Thursday night before the start, I found out that my pacer — a friend from Denver, whom I was to have from Winfield (@ 50 miles) back over Hope Pass — would not be able to make it. No worries. I made a few calls to friends around Leadville… to no avail. Apparently, there were more than twenty-six locals running this year: friends, former pacers, friends of pacers, former pacers of friends, all either running or pacing and all unavailable. No worries. I called my wife, back home on Signal, and left her a message: “Hey! Guess what! I am going to do Hope solo!”

3. I guess it was around mile six, just shy of an hour into the race, that I noticed the — for lack of a better word — knottiness within my bowels. So, doing what all seasoned ultra runners do, I ignored it. Adapted. And continued… albeit with the mantra of a more mature variation on the infamous school yard poem: “Gu, Gu, the more you eat, the more you…” Or, so I convinced myself as the 800+ headlamps snaked along the single-track trail hugging the shores of Turquoise Lake toward the Mayqueen aid station at mile 13.5.

4. After cruising through the parting throngs of the Tour de France-like crowd that lined the exit road from Mayqueen, I made it up and over Sugarloaf Pass (11,071 ft) with relative ease and to the Fish Hatchery aid station (@ 23.5 miles) in under 4 hours. I remained right on target, despite the occasional reminders of my gastrointestinal nemesis. Just ignore, eat, and continue. I dumped off my cold weather start gear with my crew, downed an Ensure, donned my Patagonia Air Flow Rock/Creek Team Jersey and Patagonia Strider Shorts — ahhh… light, airy, and perfect — and kept truckin’. I met former Rock/Creek team member Jaclyn Greenhill at the Half Pipe aid station (@ 29.1 miles), where we commiserated on how awesome Rock/Creek was (and who, incidentally, was the 8th woman finisher)!

5. Leaving Half Pipe, my stomach began to become a bit more opinionated on its nourishment, a result of the quickly rising temperature. So I ran with my turkey sandwich, adamant that it must be eaten. It was too early in a long day to already be arguing with my petulant belly! I must have run a good six miles, literally nibbling on a sandwich that was quickly becoming warm turkey and mayo melba toast in the dry thin air of Leadville. I was able to finish most of it, with the exception of the now solid crouton-like crust. I didn’t want to litter in front of Darcy Africa, so I stuffed it in my shorts. Yep, the unfathomable logic of the ultra runner strikes again!

6. At the Twin Lakes aid station (@ 39.5 miles), I met my crew and informed them of the potential train wreck ahead (heat + stomach/GI issues + Hope Pass = unmitigated carnage). They were unsympathetic, as a good crew should be. I swapped my handheld bottle for my Nathan pack, Black Diamond Ultra Z-poles, and G’N’R-infused iPod and headed across the river (course low point @ 9,200 ft) toward Hope. About 40 minutes into the climb, my stomach shut down. No worries, nothing new, happens every year. Patience. Queue the song. So I whistled along. “…all we need is just a little patience…” Repeat. And before long, the trees parted, the meadow opened up above tree line, the Hopeless tent appeared, and all the tethered shaggy Slash-looking llamas were singing, in chorus, Axl’s defining solo: “yeah yeah I neeeeed youuuu…this tiiiiiyyymmmme…”

7. So I made it up and over the pass and down to Winfield, skipping and whistling Dixie the entire way, while simultaneously high-fiving and handing out fresh-cut daisies to fellow racers… or not. At Winfield, I found my crew and sat. I was shot. Nothing. I had made decent time for the first 40 miles, but now knew that this was going to be purely about my ability to recover and if I had the desire to even finish. Knowing I still had to do Hope… solo. I was not motivated. So I sat. And sat. Still sitting. Runners coming and going and leaving and I’m still sitting. After 50 minutes (!) and some ramen, some Sprite, some watermelon, some potatoes, some will power, and changing into my La Sportiva Crosslites, I left to return from whence I came…

…and I felt reasonably well after my ultra-rest…for about 3 miles. Whereupon the lithe, rockin’ Axl hoarsely crooning in my earbuds got old, fat, and slow and proceeded to Chinese Democracy all up the side of Hope. “Sorry dude, water only,” replied my body. At a mere plod now, I continued to march in desperation to the summit, fantasizing about llamas the entire way* …and more than an hour later I crested the pass and descended, with delight, back into the dancing llama herds of my dreams (said llama: take it slow, it’ll work itself out fine… all we need is just a little paaayyysshhhence) where I sat by the fire, nursing a gourmet mixture of chicken broth and potato soup, commiserating about existential pain with other babbling zombies from the Isle of Misfit Runners.

And as I sat, patiently refueling my empty stomach, I realized that I was about to push the proverbial “reset button.” Or at least I needed to. Now. It was either move on and finish, or stay and provide “more cowbell” for a herd of G’N’R-singing llamas. I was sick of llamas, plus I had an uncanny feeling they were about to serenade me with a wicked version of “Sweet Child O’ Mine.” Quite simply, I only needed to run 5 miles downhill and pickup my pacer. I ran to Twin Lakes. Later, llamas.

*It should be noted that my time from Winfield back to Hopeless Aid was the fourth slowest of any finisher… an astounding 3 hours 19 minutes!

8. By the time I had returned to Twin Lakes (@ 60.5 miles), I knew I would be fine. My lofty pre-race goals long abandoned (apparently devoured by the grazing — or, is that singing — llamas of Hope), my lucidity regained, and humble pie eaten, I was satisfied with just another finish. The last 40 miles were easy, comparatively speaking. My pacers, local friends Melissa and Kato, were awesome company. We hiked up hills, jogged the flats, and ran the downs. The standard. It was basically autopilot mode after eight years. I: Drank a lot of black coffee. Stubbed my toes every couple of seconds. Laughed, a lot. Groaned, a lot. And got awesome leg massages… from my sister. I cruised up the Boulevard to the brilliant sun cresting the Mosquito Range on Leadville’s east side (my second sunrise of the run) …and finished. 27 hours 41 minutes 29 seconds. Streak intact.

+ And the greatest goal is just to finish. Which brings me back to the quote at the beginning. A couple of weeks before the race, I was interviewed, as a “veteran finisher”, by the editors of the race guide to provide advice for first-time LT100 runners. That quote was my published response. As it turns out, my advice would be the story of my race. Ah… the irony of experience!

++ Very special thanks to my awesome crew chief and sister, Kay, who came all the way from Japan to make sure I finished; and especially to Rock/Creek, not only for the quality gear, but whose vast notoriety provided countless shout-outs of encouragement from random supporters all along the course. (i.e. “Go Chattaboogie!”, “Yea, Rock/Creek is awesome!” and even a “Woohoo! Dawson Rocks!”)

…ohh wont you pleaassee take me hhhhooooommmmmmmeeee. And now it’s just good to be back in the Paradise City .There will always be #9.