Samantha Christen, the Southeastern Climbers Coalition’s Sunset Park Area Representative, gives us a history lesson and exorts us to do our part for the area:

Reverence.  While typically a phrase often associated with churches, graveyards and other such hallowed ground, this is not a word that readily comes to mind when referring to Sunset Park; however, it should. 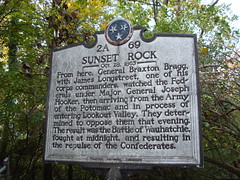 Established between 1890 and 1898 by Civil War Veterans, the sites that we collectively know as the Chickamauga/Chattanooga National Military Battlefield (CCNMB) became the first National Military Park in the nation, with the sole purposes of preserving our nation’s history and memorializing the catastrophic battles which took place in this region.

In the planning stages, great care was taken by these Veterans to ensure the accuracy of facts on the placards, signs and monuments, battle and skirmish sights, and even cannon placement.  Because these men and women took the pains that they did, the territory included within the CCNMB offers a surprisingly accurate look into our country’s past through many venues and sources.  Spread over two states and 4 counties, the Park is not only the oldest and largest National Military Park in the United States, but also home to one of the most historic climbing areas in the Southeast: Sunset Park.

It was because of Sunset Park that a more recent battle took place between the NPS and the climbing community and the Southeastern Climbers Coalition came into being.  Climbing in general has always been considered extreme.  A renegade sport pursued by only the most cavalier of personalities, those who climb at Sunset are no exception.  From the early development of the 1940’s, through   the 1960’s with pioneers such as Tom Martin and Tom Kimbro, into the 1970’s and 1980’s and the likes of Rob Robinson, Stan Wallace, Bill Smith, Forrest Gardner, Chris Chesnut and the Eiseman brothers (who never would take ME climbing as a kid…), and to the present, climbing at Sunset remains for most the standard to which traditional climbing in the Southeast is held. 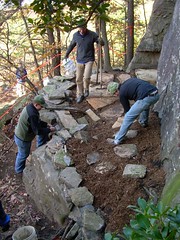 Unlike anything else in the Southeast, the climbing at Sunset, while for the most part only single pitch, is superb; the rock quality unparalleled; the grades stout; the view from the anchors indescribable (especially on a crisp fall afternoon); both the routes and the bouldering (surprise!!) incredible; and the proximity to downtown Chattanooga absolutely priceless (we should be sponsored by MasterCard…!)  The aura being incomparable to anywhere else; Sunset is special.

In recent years, there have been innumerable, and growing, complaints to the Rangers at Point Park regarding climbers and climber behavior; there have been equal numbers of remarks made among the climbing community regarding the Rangers.  Unfortunately, though we definitely are not the only user group to enjoy the natural resources of Sunset Park, we are most often the scapegoat due to our high visibility.

The lack of understanding by climbers of the historical significance of the CCNMB, and more particularly of Sunset Park, from the point of view of the National Park Service contrasts greatly with what we climbers view as the historical significance of Sunset Park.  In order to maintain the privilege of climbing in this historic area, we must be good stewards of our resources and good ambassadors of our sport.  Please help us to foster and maintain good relations with the National Park Service and with the individual Rangers by honoring the Park regulations which are posted on all kiosks and are available online: