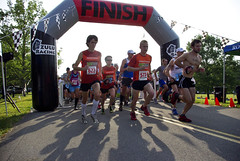 It’s that time of year again, so without further delay: we’re proud to announce the 2012 Rock/Creek Race Team! See below for the complete 2012 roster.

Along with the Salomon Rock/Creek Trail Series races and other trail runs in the Southeast, Race Team members can be seen at major events around the country. These aren’t just elite athletes who wear the Rock/Creek jersey when competing; you’ll find them volunteering at aid stations, organizing their own events, leading group training runs and otherwise acting as ambassadors for the sport of trail running.

We look beyond race results to choose our racers, selecting those we feel contribute the most to the trail running community and best represent the spirit of Rock/Creek. This is a diverse group, including two married couples (Matt & Natalie Sims, Randy & Kris Whorton) and a couple of brothers (Andy & John Anderson).

Our Race Team frequently contributes race reports from events they’ve competed in; you can browse recent race reports by following the Rock/Creek Race Team category of this blog.

For 2012, we welcome Johnny Clemons & Elizabeth Callaway to the team. We also “officially” introduce Brian Costilow and Nick Lewis, both of whom joined the team midway through the 2011 season. Here is the Rock/Creek Race Team roster for 2012 (click each member’s name for their personal profile, or browse profiles here):

Patagonia clothing is the associate sponsor of the Rock/Creek Race Team, and the team runs exclusively in apparel from the Patagonia trail running collection. Our Race Team members are hard on their trail running gear, and they let us know what they like… and what they don’t like! Our commitment is to only carry footwear and apparel that are ready for the same challenges you are.

From 100-milers to the local charity 5k, look for members of the Rock/Creek Race Team out on the trail, and don’t be shy if you have questions or are looking to get into trail running. Curious what kind of folks are on the team? For starters, check out this video on the origins of the Upchuck 50k — featuring three R/C team members — or come like us on Facebook to see the latest race results and trip reports!