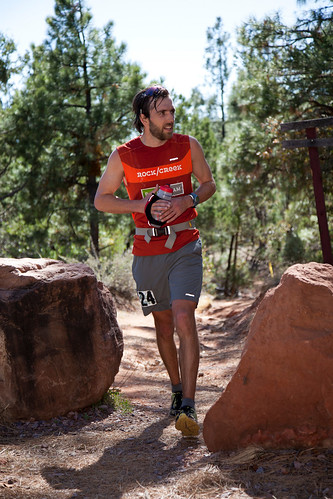 “I think that’s a tomato I had at dinner last night. Funny.” 40 miles into the Zane Grey 50, I was thoroughly enjoying examining my puke and was happy to find that I didn’t see any gels or electrolyte caps; I was only taking in 100 calories per hour but at least it seemed something was staying down.

The ZG50 is a special race with a large pain cave. It takes place in the mountains outside of Phoenix and is touted as the hardest 50-miler in the U.S. It is hot, climbs 11,000 feet, and in most places the trail is really just a flagged route through the thorns, manzanita and rocks that is full of downed trees and washed out gullies. Granted, there was some great work by the volunteers to cut back some of the downed trees, but without any sustained maintenance in years, the beauty of the trail lies in its absolute ruggedness. I have done this race 4 times now, the first time in 2005, and the trail just seems to get worse and worse every year… which is somehow one of the appeals. I had a friend tell me once that it’s like going to a rough bar: you roll out of there cut up, beat down, crusted with salt, but somehow happy.

I was coming off a slow season due to the first year of my residency in Emergency Medicine, but I had a solid block of training in building up for my goal race this year: a return to Hardrock this July. Knowing the course and my fitness, I thought sub-nine hours was a reasonable goal, and there was certainly a stacked field of runners to push the pace. As we settled into the early pace I enjoyed catching up with some old friends and making a few new ones. After the first 10 miles, Geoff Roes (Ultrarunner of the year in 2009 and 2010) took off with Dakota Jones (Montrail) and Hal Koerner (The North Face) in close pursuit.

When I woke on the morning of the race, my stomach was rumbling, and from the first gel I knew that it was just a matter of time until I threw up. So I decided to hold back some at this point in hopes that my stomach would settle in for the long day, and grouped in with Nico Mermoud (a top finisher at Mont Blanc and owner of Hoka One One shoes) and Boone Ebel, a really nice guy from Phoenix who I enjoyed chatting with. He told he was going back to school at age 30 and when I asked what he was going back for, he said “Don’t laugh, but I am going back to run cross country.” Now that is sweet.

The day unfolded in a hot mess of rocks, cut up legs and lots of puking. While I wasn’t able to eat or drink nearly enough and my energy was inconsistent, strangely my legs felt great all day. And that pretty much sums up the day — from mile one to mile fifty — vomit, variable energy and fresh legs. I settled into 5th – 6th place for most of the day, and spent most of it running by myself. I passed Nico around mile 30, and Dakota at mile 33 (who was having a rough patch of his own). Sometimes I wonder if the course has some evolutionary trait that makes runners puke to ensure that the cacti get some water.

The last section of the course involves a long climb and 4-5 miles of rolling single track that is the most easily runnable on the course. I was running pretty tight with Sean Andrish (Inov-8) at this point and seeing as I was able to hold down a cup of Coke at the aid station, found a little energy to ramp up the pace and hold him off to the finish and catch a few people (at which point I promptly puked the Coke up). I ended up in 4th place as Geoff won in a really impressive 8:13, especially given the deterioration of the course over the years.

Thanks to Rock/Creek for the support — I was really impressed with the Patagonia Air Flow shirt. It was airy and light but protected me from the sun; I didn’t wear any sunscreen under it and didn’t get burned despite the broiling desert sun.

Great day on the trail and a great time chatting with friends at the finish. While my time was slower than I was hoping, and slower than I have run previously at ZG, I felt good about the race given the circumstances. As bad as I felt at some points, dropping was never really a possibility. Great training for the Hardrock 100, where the pain is guaranteed, and being able to puke and not get any on your shoes while you run is essential.