This account of the Storm The Fort Triathlon was written by John Wigyul. 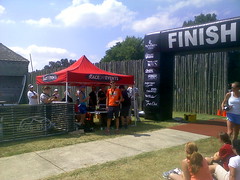 Last Saturday, August 27, Lance Steele and I competed in another inaugural race, Storm the Fort Triathlon, the race for the cannon. It was an Olympic distance race in historic Kingston, Tennessee. The swim took place in scenic Watts Bar Lake.

The swim was a little short, to my enjoyment. Transition was at 58 landing. The bike was an out and back with two good climbs, but fairly flat and fast. The run went through Kingston, then back by transition, and finishing at Fort Southwest Point, the State’s oldest Federal Era installation. It was a beautiful day.

I came out of the water in about 6th place, a bit far back from the leaders, but I was prepared to hammer the bike. I was in 3rd place by the turn around, and knew I could catch the leader. At about mile 22 I took control. I then became nervous, thinking I pushed the bike too hard with a record bike time (for me) of 59:22. I made a quick transition and was off running as hard as I could… I wanted to hold the lead as long as possible.

At mile two, local athlete Joe Peeden was behind me by about 20 seconds. I knew I needed to stay strong, but after a few miles he lost me. As I ran up the hill to the finish, I could see the fort. I crossed the line in total satisfaction with the blast of the cannon, winning the race and setting a new P.R. of 1:56:17. Lance had a good day as well, taking 1st place in masters.