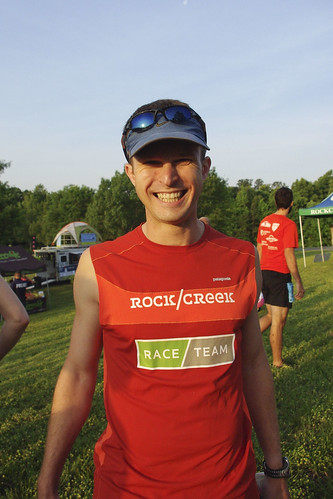 Mid-May 2009. I watched the video over and over. It was what I wanted: a trail marathon that was nearby. Tired of driving to Pennsylvania and just west of Little Rock, I wanted a fast trail marathon that was still a trail, still technical. Rails to trails would not satiate my craving. I grew up on trails. I used to drive from my house in Valley Forge to Hampton. There, I could hit the AT in just about three miles. Later, I was able to drive fifteen minutes to get lost on the trails of the Big South Fork.

Now it was time to return to my roots. The Scenic City Trail Marathon, where a new state record could easily be accomplished (or so they said), was just a few days out. I sat in my office chair and watched the five-minute video again.

That was all two years ago. I hurt that marathon. I felt the injury, but I ran well enough to place second. The next year I wanted to go sub-three, and take a new state record for a trail marathon.

Dane (Mitchell) and Nick (Gooden) had different ideas. Nick beat me by almost three minutes. Dane beat me by more than a decade, or so it felt. When I came out of the woods, I saw the clock tick from 2:59:59 to 3:00:00. Good enough for third.

2011 would be another strike at sub-three on the course. I didn’t even think about first place; Josh Wheeler was in the race. He beat me daily in the Chattanooga Mountains Stage Race. When I crushed the first half of the Lookout Mountain 50 miler (not knowing what I was doing), he was the only one in front of me. Boy Wonder excelled at the trails. He is an amazing Rock/Creek teammate, and I didn’t even think about pulling an upset over him.

Then I was given bib 1. Wheeler was bib 4. Feb, a friend from Memphis, with whom I had raced several times, was bib 2. With the first few bibs in seeded order, this meant I had a target on my back prior to the race. A thirty-minute delay of the start helped others see my displayed target. All this was working on me mentally. What little mental stability I had was disappearing.

We started with a helicopter overhead. The first part of the course had been changed, but we bulleted out. Everyone must have wanted to make up the delay. I ran a sub-6:00 pace with a dozen people in front of me. Wheeler was out there. My friend and R/C teammate Owen Bradley led around the first corner. Two weeks earlier, I ran a mile with him at the Strolling Jim. He chatted leisurely at me while I tried to stay with him from mile 29-30 of the race. He ran ten more miles than I did at that time, and I thought I was going to die trying to stay with him at that pace. This time, I didn’t see him again until when I finished. 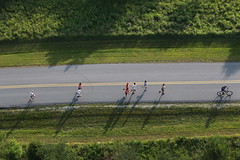 He explained what I saw slightly after the start of the race: everyone in front of Feb and I ran into the woods too early. Wheeler and two others came back out confused and right in front of us. They were directed to turn (as the old course did), but it was not the new course. They hit trails a half mile too early. Some may have lost thirty seconds with the wrong turn.

Teammate Matt Sims came up beside Feb and I in the first mile, to help assure us that we were going the right way. Feb and I hit the trails together, right where we were supposed to hit them.

The first two miles clicked by on my watch, and were verified by a sign some ten feet later. Just under thirteen minutes meant we were too fast. 6:52 gets you through if you are trying to break three. 6:30 is too fast. We both said we should slow down. After all, we decided, Wheeler was the only marathoner in front of us.

We hit the five-mile mark at 32:40. We slowed by :03 per mile – not enough. Feb and I switched positions and pushed forward. My watch was about 5% off on the measurement. Feb said his was off by almost 15%. Cursed technology!!! By the time we hit ten miles, his was off by nearly 20% and mine was off by 8%. 63:20 for ten miles means that you have been running a 6:20 pace (on trails!). 6:20 pace translates to a 2:47 marathon. We both realized that if we did not slow down, we would be slowing down in a non-voluntary fashion. We would blow up.

I just wanted to hang on until the top of the hill at eighteen. I could take the rest if this were the case. We hit the twelve-mile mark at 1:17. Last year, I slowed to ask how far back I was. This year I asked for water. (Rock/Creek co-owner) Dawson Wheeler poured into my small flask and questioned what I was doing with such a small water bottle. My only answer was that I was trying to catch his son. With a smirk, he sent me on my way with a full flask. The water stop at fifteen met me with the doubts of hitting the top of the next hill with all me energy. I was starting to blow up.

Feb pulled away. He was out of sight by the time I hit the base of the hill. The mental dagger was only dulled by the thought that I was still third. I gave the hill, and the next one, a strong showing. I was starting to lap people. I came upon Angela Ivory first. Her smile seems to always make my pain go away. It did this time too, just temporarily. At twenty two a lady told me I could the guy ahead of me if I push it. I thought Feb must have been fading.

Then she said, “You’re in fourth!!!” How could this be? Fourth? She had to be mistaken. Only Wheeler was fast enough to be in front of Feb and me for the first blazing half. I knew that she was confused. Then I started thinking. I started doubting. I was souring. It could have been the heat. My Patagonia shirt had never been so wet. Not even in the washing machine could it be this drenched. It was not just the heat, it was fatigue. Bumping my mileage by almost thirty miles per week starting in May could be a downfall. My legs were not tired though. My heart was. The race did not click mentally anymore. 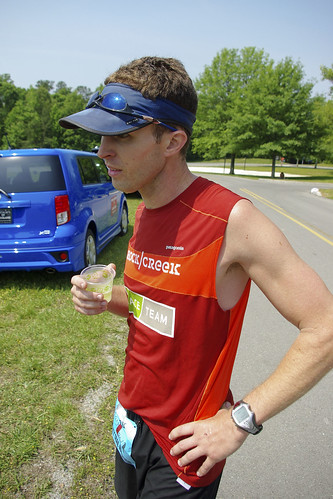 By the time I hit the hill at twenty four and two ladies told me there was a snake on the trail, I was walking in front of people. The news of being in fourth place had been the proverbial straw. My back broke.

Encouragement at 24.1 water stop helped me muster some “running” legs. I stumbled along trying to catch Feb. I saw him on a ridge ahead of me. Feb was weak, but I could tell he had more strength than me at this time. He had put in a good run. When I exited the woods, I looked for him crossing the finish line. It had happened a few minutes before that. He was third. I was fourth. My family greeted me after the finish. I did not expect their presence but welcomed it.

I spent the next few hours shaking hands and cheering people to the finish. The lesson from this race took a while to come to me. The next day I ran twenty in order to try to prepare for the stage race. I guess that I can use the mileage, but I was a little disappointed with my run. What did not disappoint were the people and the race itself.

My running friends are always a blessing. I have been lucky that I have been able to experience that blessing towards the end of May for the past three years. I tell people that I will be back. The first year I was second. The second year I was third. The third year I was fourth! I must come back and get fifth next year …maybe a sub three too.