At this weekend’s Lookout Mountain 50 mile trail race, like all of our ultras, there was no shortage of compelling stories; sit down with any ultra runner and you’re bound to learn something interesting. Throughout the day, however, one runner consistently raised the most eyebrows: Ali Edwards, from Birmingham, AL.

When she came through the start/finish in the top 10 overall, she got our attention. When she ran right through Long Branch at mile 34, still in the top 10, still on a pace that would absolutely shatter the women’s course record, we had to know: who is this girl??

So on Monday, we tracked her down, and we asked her some questions via email. Here are the answers!

Rock/Creek: First things first: How did you get into ultrarunning? And how did you get so fast? Was this really your first 50-mile trail race?? Seriously, tell us a little bit about yourself! 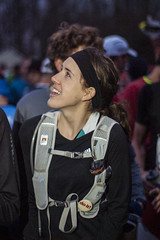 Ali Edwards: This was indeed my first 50 mile trail race! I told myself several times out on the course that it would be my last 50 miler as well! Though time has already softened the painful memories from Saturday, so we will see!

I started running distance last fall when I decided to train for a marathon at the suggestion of a friend, basically on a whim. I ran some cross country in high school, but I wasn’t anything special, just an average, middle of the pack runner.

However, during my marathon training, I found that the longer I ran, the better I felt (and I also noticed this was unusual compared to other people). So I ran a few marathons and had a great time, but I wanted something more- a bigger challenge, a real adventure, a spiritual experience.

Last spring, I began reading lots of books about running that were very influential in my life, the most notable being Scott Jurek’s memoir. His story and questions sounded very similar to my own, and I wanted the same types of answers that he searched for and found in ultrarunning. A dream began to grow deep inside me to become an ultrarunner, but the idea still seemed completely unattainable.

My first ultra was in September, a small, laid-back 32 mile trail run in Birmingham (Owen’s race). I fell in love with ultrarunning and the ultrarunning community at that race. I was surprised at how great I felt after that distance, and I wanted to explore my limits so I signed up for this 50 miler. And man, it was a legitimate challenge! I definitely didn’t feel fast at this race, and most of the time I felt like I was just barely creeping along. I still don’t consider myself fast, I guess I can just endure pain for a long time!

R/C: So… if this was your first 50-miler, what was your goal coming into the race? Did you expect to have a chance at the course record? You basically ran in the top 10 all day.

Ali: I seriously just wanted to finish! I had a headlamp tied on my hydration pack because I thought there was a good chance that I would still be running in the dark! I just knew that anything could happen on the trail over that many miles, and since it was my first 50 I had no idea how my body would respond. I had no expectations to win or set a record; I still cannot believe that I even finished because I almost quit a hundred times! 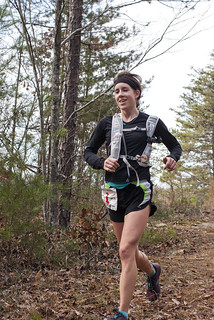 R/C: We happened to notice you blasted through a couple of the aid stations without stopping, so we’d assumed you were feeling great, and really had your calorie intake & hydration in order. Can you talk about your nutrition plan for the race? Will you do anything differently for your next 50-miler?

Ali: I’m a complete noob at this sport and since I had never run longer than 4.5 hours before this race, I completely winged it on my nutrition. Basically, I knew I needed to eat something every hour and drink enough to keep peeing. Other than the hourly energy gel and/or snack, I would eat something extra and drink more if I felt sluggish or weak.

I ran with my own hydration pack and snacks in case I hit a low point that wasn’t near an aid station- which turned out to be a great strategy that I plan on doing again in future ultras. Despite my lack of planning, my “plan” worked pretty well for me!

R/C: Not only did you beat all the other girls, you beat a lot of the guys. Most of them, actually, and quite a few of those are really, really fast runners. In fact, we’re positive you passed a few on the homestretch between Long Branch and the finish line. Is there a message for other female ultrarunners?

Ali: Well, I would just say don’t be intimidated by the guys. One of my favorite things about the ultra distance is that it seems to even out the playing field between men and women. So, don’t assume you will always be slower than the guy ahead of you! When you put limitations in your mind on what you as a woman can do, you are holding back your gender. Also, be confident in yourself, as most of the time the largest source of doubt about my abilities comes from my own mind.

R/C: You’re 21 years old, and the girl whose course record you broke set that record when she was 21. We’re seeing an influx of young women running ultra distance races; do you have any advice for girls who are looking to take it beyond marathon distances, or girls who run road marathons and are thinking about running trail marathons instead? 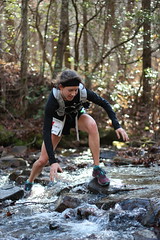 Ali:Take the trail! It’s definitely a rougher road, but it’s so much more rewarding. I was a road runner before I discovered trails this fall, and it wasn’t until I got on the trails that I truly discovered my passion for running.

I just feel like there is so much to learn from trail running that is not as easily accessible on the road. Running trails is a completely different experience- it’s not about the time or distance you cover, it seriously is about the journey and connecting with nature. The trail is also a great teacher about life and your own self.

And if you’re bored with marathons and want a fresh challenge, do an ultra! The distance can definitely seem intimidating, but it’s not a complicated sport- you just run. And there’s no better feeling than knowing you accomplished something so epic. Also, don’t be discouraged when you fall out there, because you will- I fall all the time. Just get back up and keep going. You really do just have to take it step by step. 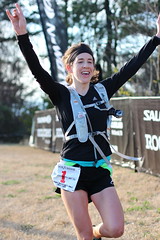 R/C: So, we were totally creeping around in your UltraSignup results, and it looks like you’ve taken top female honors at your last six or seven races. What’s next? Can we look forward to seeing you at more Salomon Rock/Creek Trail Series races next year?

Ali: I’m planning on Mountain Mist in January and Mount Cheaha 50k in February. Then, who knows! I’m always up for anything and everything, and I love traveling and running new trails. Also, I love to race often because it’s a fun way to get in some long and challenging training runs!

I would love to do another R/C race, you guys really know how to put on an awesome event! Maybe I’ll be back for Stump Jump?!

Thanks for the interview, Ali… and congrats again on the impressive course record, women’s win and 6th-overall finish! ~JDB