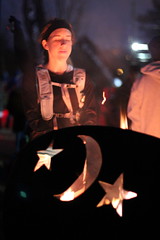 Well, it’s a week before Christmas, and that can mean only one thing: that the Rock/Creek Lookout Mountain 50 Mile & 10k trail race was this weekend!

This year’s race was highlighted by two dominating performances. Joseph Czabaranek, from Ohio, came two minutes shy of besting Josh Wheeler’s nearly-untouchable CR, beating the field by over an hour in a blistering 6:54:36.

Meanwhile, Ali Edwards of Birmingham — who seems to have won everything she’s entered since September — crushed the women’s course record with a time of 8:22:19 and came in sixth overall! 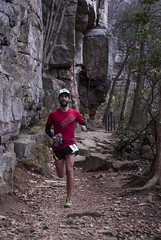 If you’re keeping score at home, Czabaranek’s time equates to a whopping 8:18 min/mile pace, on a course with plenty of technical footing and more than its share of climbing. He becomes the second runner ever to break 7 hours at this race. 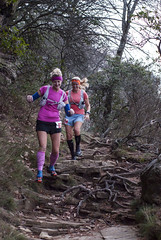 After some early concerns about the weather, which is commonplace for a race that takes place in December, the rain held off all day. It rained all day Sunday, instead! That meant no Lookout Creek flooding this year, relatively dry footing and great course conditions on both sides of the mountain.

This race takes place on one of the shortest days of the year, of course, with the start taking place in the early-morning gloom and most of the 50-mile runners finishing after dark. Those finishing after sunset enjoyed the strings of holiday lights which illuminated the final stretch of trail. During the daylight hours, though, we had several photographers out on the 50-mile course. 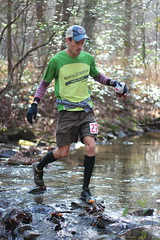 Those photos are available here:

All three of these photographers are Rock/Creek volunteers, spending a Saturday in the woods to capture images from the race. In fact, you met Rock/Creek co-owner Dawson Wheeler on the course, as well, cooking up some hot soup and filling water bottles at the Lula Lake Aid Station he manages each year.

It’s worth repeating that R/C doesn’t just slap our name on a race series; these are truly our races, and dozens of our employees spent a long day in the woods to cheer runners along, serve up aid station goodies and snapping photos. From clearing the trails to marking the courses, these are Rock/Creek trail races. 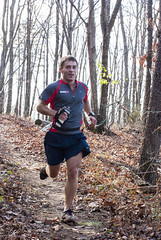 When it comes to your holiday shopping — or the next time you need new trail running shoes, or camping gear, or a rain jacket — please keep us in mind. We love trail running as much as you do. Shop Rock/Creek here.

Our sponsors go the extra mile, too. Our local SmartWool rep brought hot chocolate to keep everyone toasty. Salomon, Suunto, Smartwool, The North Face and others provided awesome prizes for us to give away and award to podium finishers.

In addition to series title sponsor Salomon, race sponsors for the 2012 Lookout Mountain 50 Miler include: 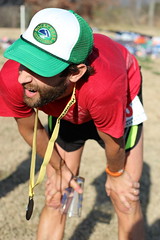 Remember, if you have blog articles or photos to share from the race, let us know on the Lookout Mountain 50 Mile Facebook page or use hashtag #LM50 on Twitter.

This concludes the Salomon Rock/Creek Trail Series for the 2012 calendar year. Can you believe it? We have a slight change to next year’s schedule, shifting the Southern 6k from February to September, so the 2013 series kicks off with our classic River Gorge Trail Race in March.

Registration for the 2013 races is set to open on January 1, so look for an announcement and make sure to register early; we expect every race to fill up even earlier as demand for these races continues to outpace capacity.

Thanks again to all of our sponsors and volunteers, who absolutely make the Trail Series possible. We’d like to wish everyone a happy holiday and new year; stay out there, keep running through the winter and we’ll see you again next year!