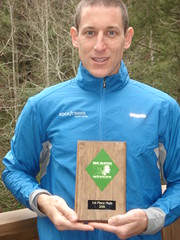 A small group of us rallied for dinner in Huntsville, Alabama. The Whortons used to live in Huntsville, so we let them pick the spot. We all had nice healthy portions of pasta while we listened to the latest greatest hero moments in the life of Stephen Smith.
After dinner we went our separate ways and planned to meet up in the morning. The Whortons, Stephen and Doug Dooley all headed to their luxury accomodations in Moulton, Alabama while we decided to meet up with Jamie and Wendi Dial in Decatur, Alabama.
The next morning we headed off to the race site for a 7am start time. The temperature was 31 degrees and as usual there was a lot of anticipation of how the day might turn out. We had a great group from Chattanooga: Tracy and Jacquell Gartman, Brenda and Lee Simril, Randy and Kris Whorton, Doug Dooley, Stephen Smith, Sal Coll, Jason Hamrick, Mark Mason and of course my beautiful bride, Natalie Sims.
The 25k and 50k started together and at mile 8 split off. As we headed off in the cool morning air I quickly realized that my new training program might be a mistake. I won’t go into the details, but basically “run a lot” is the program. This goes against my exercise mantra of “do what you want, when you wanna do it”.
Off we go down the dirt road for 2-3 miles. I find myself in 6th place. There are 3 guys doing the 25k and 2 guys doing the 50k in front of me. I think this is a good place to be for a normal guy like myself. I typically allow guys with ear rings, tattoos, and fancy arm warmers to be ahead of me. Jamie D is running right in front of me and before we get about the business he gives me the look followed by “those are your 3 guys right there”. He was referring to the 3 guys in front of me that he expected me to catch sometime over the next 13 miles. Jamie likes to call me “rocket boy” because I normally go out fast and then blow up somewhere well before the finish line. Today, rocket boy was being a good boy and pacing himself.
The single track horse trail marks the start of the business. Hats, gloves and arm warmers are off by now and we are moving. There are now 4 guys in front of me, 1 of which was a 50k runner and he was in the lead! This guy was flying. Aid station #1 comes around mile 6 and to my surprise, of the 3 guys in front of me, the 2 guys in the 25k stopped to get water and I cruised on by them carrying my little handheld. I actually felt like I had out smarted them, which is typically how I win any race.
Mile 8 comes and the lead guy splits off to the right and I head off to the left. I knew Jamie would pass that guy relatively soon. On the tight switchbacks I could see the guys behind me and I knew Jamie was keeping his eye on the prize.
So there I was, all by myself in the front. Being chased is not my favorite thing. I would much rather be in the chase group. The 2 guys behind me could see me for the next 3 miles. I was trying to put some time on them and just get away enough so that they couldn’t see me. The forest is bare from all vegetation so your line of sight was pretty far ahead. I knew we had 1 more aid station and that they would probably stop again. Sometime around mile 11.5, I had put about 40 seconds on the two guys behind me. Enough time now that I was in the “out of sight, out of mind” position. I cruised in to the finish line in 1:46:03.
One of my favorite things about doing the lesser of the 2 events is the non-reaction you get at the finish line. There was 1 guy standing there and he said, “good job man”. I don’t expect a marching band or anything but a few bull horns would be nice.
I took a quick shower, ate 2 hamburgers and positioned myself at the finish line to see the “main event” unfold.
I should mention that the course is 100% horse trail. The trail is a big muddy ditch filled with horse pee and whatever else finds it’s way in. It’s hard to run in and if you were just going to do a fun casual training run this is not where you would go. I do however think it makes a great venue for a race. It’s the type of course that will mentally wear you down over a 50k distance. Constantly dodging puddles of muck is hard and hard and hard.

I wanted to set you up for what we all thought was unbelievable. When Natalie crossed the finish line she had that look on her face as she always does. The look of, “I’m so slow”. The thing that caught our attention is that she looked like she hadn’t even done the race. She was as clean at the finish line as she was at the start. Not a speck of mud on her. She spent the better part of the day avoiding all the mud troughs. Unbelievable!
Overall, Black Warrior is worth doing. It’s a really fun, low key, low budget race. 100 people in the 50k and 100 in the 25k. They give really nice cotton sweatshirts and synthetic running shirts to all participants. The race director is a solid dude and does a great job.