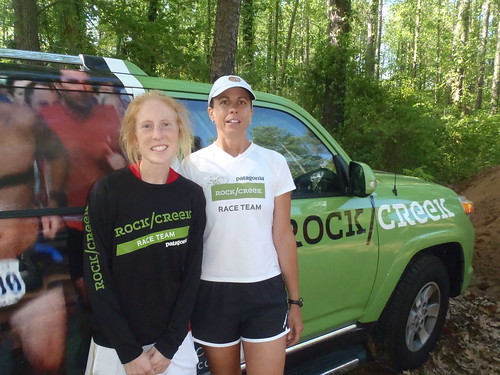 Last Saturday, I was fortunate enough to ride to Arkansas in the Rock/Creek Race Team’s Toyota 4Runner with (fellow Rock/Creek Race Team member) Dreama Campbell and Mark Mason to do the Ouachita 50 mile race. We managed to drive through some pretty nasty storms, only to find out that they were much worse in Chattanooga!

After a long 7.5 hour drive, we picked up our packets and headed to find something to eat. It was already after 8pm, and I was a bit worried about having to eat so late, especially with the early 6 am start time. My stomach and I don’t always get along real well during races, so I try to do everything I can to avoid any problems, and eating an early dinner is one of those things.

Unfortunately, this was just not going to happen tonight. I just crossed my fingers and hoped things would turn out ok. As it turns out, I probably should have crossed my toes as well.

After settling into our room, we went straight to bed in hopes of getting some decent sleep before the much-too-early wake up call at some awful hour like 4:30 am. Driving to the start in the pitch black dark, I realized that I completely forgot to pack a headlamp, as did Mark, so we could only hope that the sun would come out enough during the first 3 miles on the road before hitting the trail. A few minutes before 6am, Dreama and I forced ourselves to shed our warm layers and step out of the car into the cold and extremely windy air. The three of us lined up along with 150 or so other runners and waited for the start which was no more than the RD saying “Go!”

The first 3 miles are on pavement, to the visitor’s center of Maumelle State Park, and I went out at a pretty good pace simply to try to warm up. The wind here was brutal, and I just about froze the whole time. I also quickly noticed that my stomach was definitely not quite right but there was nothing I could do now but hope it got better or at least not worse. Once we turned on to single track, the trail descends steeply then flattens out until you hit the major climb of the day up Pinnacle Mountain. 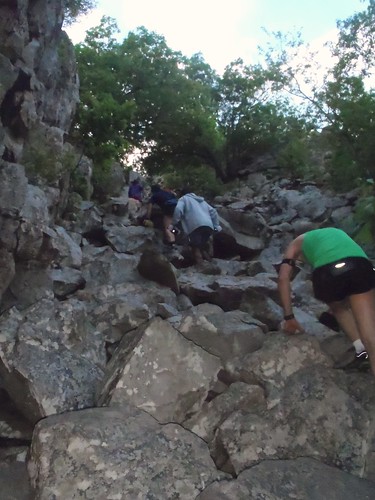 I had heard horror stories about this. People said it was more like rock climbing and that there was no way you could run it. If you are familiar with blue hell at Mt. Cheaha, Pinnacle makes it look like a cake walk. I was literally doing all I could to step from boulder to boulder up an extremely steep slope. Having one hand occupied with my handheld water bottle didn’t help the situation. It was a pretty cool section though and definitely added something unique to the race. I was also very thankful that it didn’t come at mile 28 like blue hell does, because I’m not sure that I could have done it then. Going down was almost as difficult, and a fall here would not have ended well.

This next bit of trail was really pretty and ran along the lake with some great views. The sun had come out by now, and being in the woods offered protection from the wind. Me and my stomach were still going at it, so I was not able to eat or drink like I should have for the first 15 or so miles when it finally settled down. Compared to the other trails in Arkansas that I have been on, Ouachita is much less rocky and hilly but still has some very technical sections and a lot of rolling hills.

The course is an out and back, and by the time I reached the turn around, I was really feeling it. I knew I had not taken in enough fluids early on, and it was coming back to bite me. However, I did get a mental boost by hitting the half way point and knowing that I would get a chance to see some familiar faces on the way back. That is the part I like best about out and back races; you get to see everyone, those in front and those behind, and get an idea of where you stand in the race. I saw Dreama, who was looking really strong, and was glad to hear that she felt pretty good which was more than I could say for myself at the time.

The 8 miles of trail leading up to the turn around that you obviously have to do twice crossed more creeks than I could count. In fact, I tried to count but soon lost track. Due to the heavy rainfall, some of them were pretty deep, and one even had a rope strung across it. Needless to say, my feet were constantly getting wet but The North Face Single Track shoes I was running in drained really well. I eventually made it out of this section, and into the final 10 miles or so.

Knowing that I was getting somewhat near the finish lifted my spirits some, and I really looked forward to hitting the road for the final 3 miles. Remember the part where I said the trail descended steeply from the visitor center? Well on the way back, the trail ASCENDS steeply to the visitor center.

When I popped out on the road, I was never so happy to see pavement in my life, even if it meant 3 hot miles with the sun beating down in full force. I picked up my pace a bit, and with about 2 miles to go, Stan Ferguson blew past me like I was standing still. He said that he had been chasing me for 22 miles to which I replied, “well, you caught me.” He offered some encouragement and was soon way out in front. To be honest, this last part didn’t seem to last as long as I thought it would. 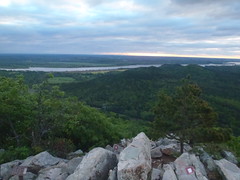 I rounded a corner and saw the pavilion which serves as the start/finish. Running across the finish, I was greeted by RD Chrissy Ferguson, who was there to shake each runner’s hand and give them a finisher award. Mark, who had run the 50k, was also there to give me a hug. In all his humility, he failed to mention that he was the 1st place masters finisher, so congrats to him!

As I thought about the race, and how my day had not started out so well but also didn’t get near as bad as it could have, I was thankful for the opportunity to run such a pretty course with outstanding volunteers and support. The race was extremely well organized and trail markings were awesome. I quickly found my favorite post race drink, diet coke (perfect for rehydrating, I know) and plopped down in Mark’s lawn chair to watch the other runners come in. Dreama took 3rd overall female and had an awesome race, so all in all it was a great day for the Chattanooga folks and Rock/Creek race team!