Thanks for the report, Sam!

Double Top 100k started off with a winter wonderland. As I drove from Chatsworth, Georgia to Fort Mountain State Park, the temperature steadily dropped from 34 with light rain to 29 with moderate snow and an inch on the ground. Without really knowing how to get to race headquarters, I felt confident the tire tracks in the snow could only be ultra runners heading for a 100 miler 3 a.m. or 100k 6 a.m. start. It was an awesome morning. I love the snow – nothing better than the peace a snowy night brings. 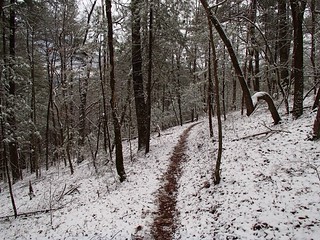 The race began at cabin number 4, with half the field inside and the other half outside. It was a relaxed atmosphere because we had a long way to go and no one felt the need to be in a hurry. It was dark for about the first hour, so headlamps were ablaze. It is not often you get a snow run in this area, and to pair it with a night run is a wonderful experience.

Within the first couple of miles, I was paired with Richard from Mooresville, North Carolina and “Run Bum” Shawn from Atlanta. We were able to stick together for the first 11 miles as Shawn, the race director for the upcoming Georgia Death Race, narrated different sections of course.

As conversation led to the revelation of where we are from, I experienced the pride that always accompanies responses to disclosing I live and train in Chattanooga… “Man you’re lucky! It’s a good thing I don’t live there, I’d be on the trail all the time” and “Oh yeah, you guys have the greatest races”.

After a few creek crossings and one more upward climb, we parted ways at the Cohutta Overlook aid station where I gratefully consumed an early cup of soup.

The next section of trail was a nice, mostly single track that wound around and through the North Georgia Mountains. The forest was a blanket of white except for the trail that had been cleared by our 100 miler forerunners. Their recorded footsteps simplified following the course. At this point, the trail looked like an inverted chalkboard. As I worked my way down the ridge, I could see the section of trail upon which I was about to descend. As I later learned, our forerunners were about to let us down. 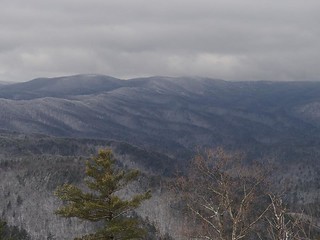 Instruction during the pre-race meeting indicated blue flagging was bad. “If you see blue, you have gone the wrong way.” A gentleman from Boston was running toward me. “Are we going the right way, cause I just saw blue?” Oh no! I had just descended hundreds of feet. Boston headed back to see if he could find the course. I investigated the blue flags. Yep, blue.

After consulting the map and discovering a rogue orange flag, we determined we were on the correct course and this was part of the out and back to the third aid station at Mulberry Gap. Wrong! At the Double Top aid station we learned the entire 100 miler group had made same error, including missing the Mulberry Gap aid station.

The biggest climb of the day started from the Double Top aid at 1830 feet and increased to 3510 feet in 3.5 miles. It was a long, grueling climb with Molly from Atlanta whom I met 3 miles before. While I had the lead, she was tracking me and closing ground as we approached the top. This is where we were informed that no aid volunteers could get to the Usti-Yona aid station, which was the turnaround point. We were encouraged to turn around now.

Molly insisted that we were experienced runners, had our own supplies, and would stay together. The aid station volunteers filled my water bottle from water heating on the stove, as the water cooler valve was frozen, and onward we went. The cold was starting to get to me, but with an extra shirt and a couple hand warmers, I was good as new. The next 14 miles were filled with great winter views and good conversation. When we got back to the previous aid station, it was gone. I had rationed my water for this station, but I would just have to wait for another 3.5 miles to refill.

At the Double Top aid station, mile 42.5, we were informed that the race was stopped due to the limited aid stations and we could no longer continue. The volunteer staff had switched modes from supporting active runners to pulling racers off the course and transporting them back to the start/finish. It was a bit of a bummer, but the safety of the runners and volunteers has to be first priority.

In spite of the early stop, Double Top was a still a great experience. One of the best trail runs I have ever enjoyed. The course was beautiful. The surprise snow put it over to top. My thanks to the Race Director and volunteers for all the hard work and putting up with such conditions. Thank you for waiting around in sub-freezing conditions. Thank you for switching gears and transporting us back safely. Everyone in the event had great positive attitudes. Thank you Double Top.

Chattanooga shout out to Mike Scott and Sal Coll. Sal ran the 100 mile event. Mike ran the 100k and we were able to run together for a short stint after Mulberry Gap. Thanks also to Mike for alerting me to the potential inclement weather the night before. I was able to rethink my game plan and transportation. Photographs provided by Mike Scott Photography, LLC. a division of Wild Trails.