This weekend, of course, was the 2012 Scenic City Trail Marathon! Of approximately 600 runners that toed the line on Saturday, an even 500 ultimately finished their respective races.

Johnny Clemons took home the overall win in impressive fashion, and his time of 2:43:27 missed out on besting Dane Mitchell’s course record by a mere five seconds. He’s on an incredible tear right now — winning the 2011 Upchuck 50k, 2011 Lookout Mountain 50-miler, 2012 Mt Cheaha 50k and 2012 Georgia Jewel 50k — and, at this point, has to be the favorite for every trail race that he enters.

Female winner Meghan Lederer, meanwhile, turned in the second-fastest women’s time in race history, and we look forward to seeing her again next month when she competes in our 3-day Chattanooga Mountains Stage Race.

Perhaps overlooked in Johnny’s hunt for the course record is how well-contested the women’s marathon was this year; in all, 9 female runners finished in under 4 hours, five more than last year. Meghan’s win came against fierce competition like top women’s StumpJump 50k finisher Lindsay Beckner and podium regular Natalie Sims.

In the half marathon, Daniel Mueller returned and claimed his second consecutive win, despite running a few minutes slower than his 2011 pace. Meanwhile, female winner Annie Kelly, from Alpharatta, GA — all of 17 years old — bested her mother, Sue Kelly (who took top Master’s Female). Did we mention that Sue was the top women’s finisher in 2011? They must grow ’em fast in Alpharetta.

Congratulations to all race finishers. We had runners from 21 states on hand, and one from Germany, many of whom were running in Tennessee for the first time. 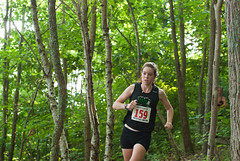 Alright, we know most of you are here to view results and check out the race photos, and of course we’re happy to oblige.

Visit these links for final race results (we’re presenting these in both “overall” and “age group” formats): 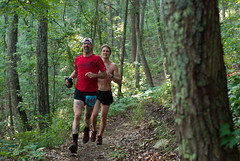 Photos from the race are now available here:

The story everyone is asking about, of course, is that of the runner who collapsed on the half marathon course and required evacuation to a waiting ambulance. While we’d prefer not to list her name here, we’ve heard that she is feeling much better after a night in the hospital. 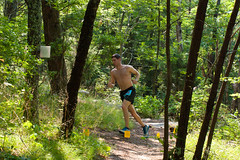 Special thanks, though, are due to the runners who stayed with her, called 911, offered assistance and went for help! Aline Bernard, the physician who was second female in the marathon at the time, forfeited her likely podium finish in case her CPR training was needed. Carrie Couch Lasseter, who happened to have her cellphone, called 911. Michelle Gardner and Chuck Smith also waited with her while our medical team and paramedics were en route.

The response of other runners in this event, we think, speaks volumes about the trail running community here in the southeast.

Hooked? Follow this link to view the Salomon Rock/Creek Trail Series race calendar and sign up for the remaining 2012 events.