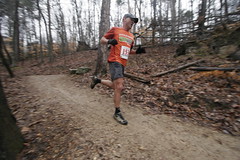 This year’s race had 197 finishers: 127 men and 70 women. Despite the rain, reports were overwhelmingly positive in regard to the new course layout. Almost all of the course is dirt-packed singletrack, without any particularly nasty rocky or rooty sections, and after the first big hill — with several switchbacks, it’s not to be understated — the course twists and rolls through thick forest. What previously was best referred to as a “6k+” is now truly a 6k, and we saw the average race times drop accordingly. 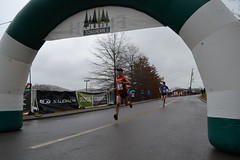 Faster times notwithstanding, the 2011 male and female winners both returned to earn repeat victories in 2012; congratulations to Jake Bradley and Kimberly Humphries! Make no mistake: this is a fast trail race, and Jake’s race report certainly corroborates that fact.

Special thanks are due to the many, many volunteers provided by Southern Adventist University. 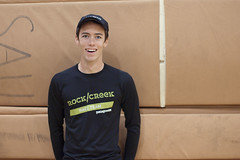 The course was incredibly well-marked, and most junctions had a “trail marshal” in-place to point the proper direction anyway. These folks stood outside in the rain and cold long enough for 200 runners to run past, and deserve appropriate recognition.

Also, if you didn’t have the chance to try running in a pair of Salomon trail running shoes, it’s not too late. Salomon, who brought a demo fleet of footwear for runners to try out, will have demos at all of the Salomon Rock/Creek Trail Series events this year. Where else can you run 4 sloppy miles in someone else’s new shoes??

The next race in the series is the Rock/Creek River Gorge Trail Race, now in its 12th year, with 10.2-mile and 6.5-mile options. This race utilizes the Mullens Cove Loop in Prentice-Cooper WMA, part of the River Gorge segment of the Cumberland Trail; this is one of our favorite runs, and a section of the Rock/Creek StumpJump 50k course.