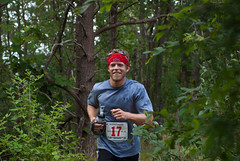 The 6th annual Rock/Creek Chattanooga Mountains Stage Race has come and gone. We’ve run 60 miles of great trails together, we’ve shown each other cringe-worthy photos of our scrapes & blisters, and we’ve shared post-race beverages at the Crash Pad. Hopefully, your race experience was one you’ll remember for a long, long time. Let’s recap the actual competition:

Johnny Clemons, easily the pre-race favorite, stormed out to a commanding 7:37 lead in Stage 1, aided in part by Scott Williams losing the course and dropping from 2nd to 11th in the process.

The second pack of lead runners included several from the aforementioned Kalamazoo group: Alex Poulsen, Jonathan Marsh and Andrew Simmons. Speaking of Kalamazoo, Nicole Clement was running in first place at the final aid station for Stage 1, but a misstep (captured on video by Jamie Dial) put her into a tree, broke her water bottle and dropped her to 10th. Mandy Meyer, Scenic City Trail Marathon winner Meghan Lederer and Nancyanne Hickman would go on to cross the line 1-2-3.

For Stage 2, the plot thickened even further, with Clemons taking his turn for an off-course detour and losing a 3+ minute lead to finish 5th. Scott Williams took the stage, 2:14 ahead of the next finisher and closing enough of the gap to make a podium finish a reasonable possibility. Josh Bart (San Antonio, TX) jumped several places in the standings, besting Marsh and making the race for third overall a hot one. All three top female runners finished in the same spots as the day before. 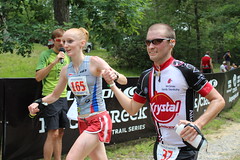 Sunday’s Stage 3 finale did not disappoint. We received word that Clemons had required an ER visit for severe dehydration the night before, and would be unable to compete in the final day of the event. This absence catapulted Poulsen into the top spot, but his lead was thin, and the competition would be strong from the runners who had hung with him in the lead group all weekend.

Williams, by this point a man on a mission, would win the stage after struggling all day to pull away from the pack; his efforts (a 4:33 margin of victory) were enough to put him back onto the overall podium, while Poulsen’s third place finish gave him the overall crown.

We can’t help but wonder if Williams could’ve taken the whole thing, if only there were a Stage 4! As with both previous days, the girls finished Meyer-Lederer-Hickman, earning each their respective spot on the podium.

Complete results for all three stages can be found here.

This race, however, is as much about the other 200+ runners as it is about the top finishers. Many familiar faces returned from last year’s Stage Race, too many to name. Large contingents of runners made the trip from various cities, Nashville and Asheville and Atlanta and Huntsville among them. More couples and family members ran this stage race than I can even count — the Browers and the Lederers and the Martins and the Meyers, and the other Meyer family, and many more. Nikki Kuzoff traveled from Mount Albert, ON (Canada) to run, and Chris Luberecki from Tahoe City, CA. 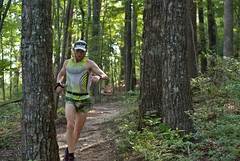 We’d love to hear your stories from the race. Was it harder (easier!??) than your expectations? Are you planning to come back next year, or was this a once-in-a-lifetime bucket list race for you? Come visit our Chattanooga Mountains Stage Race Facebook page and share with us, link to your existing blog or race report, or share your photos with the rest of the runners.

We’re pleased to have a pretty extensive collection of images of this race — many of them available for free. Here are links to each day’s stage from three different photographers:

This race, more than any other Rock/Creek event, relies heavily on the volunteers who stock the aid stations and flag the courses and help cram all those cars into the limited parking at Lula Lake. These are local trail runners who would probably rather be running the race than filling bottles with HEED, but love the sport and won’t pass up an opportunity to help put on this kind of event.

Those are Rock/Creek employees spending their weekend taking photos along the trail and supporters helping to clear trails the week before the race. We think the trail running community in Chattanooga is thriving, and we hope you feel the same way after coming to see what we have to offer. 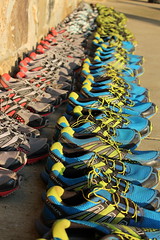 Our volunteers make this race function, but our sponsors — especially title sponsor Salomon Running — are the reason we’re able to have this event in the first place! Please reciprocate their continued support for trail running:

Thanks for being a part of the Salomon Rock/Creek Trail Series. Proceeds from our races continue helping to build and maintain trails in Chattanooga. There are four Trail Series races remaining in 2012: the Still Hollow 1/2 Marathon, the Rock/Creek StumpJump 50k, Upchuck 50k and the Lookout Mountain 50 mile. Hope to see you again soon!