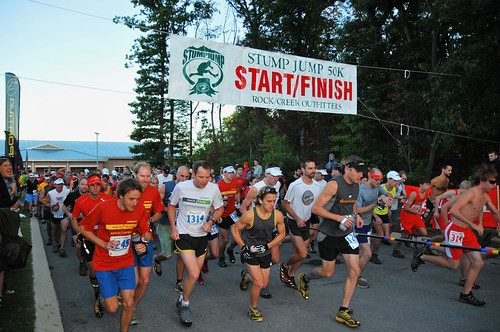 Crisp air and Tennessee dirt packed trails welcomed more than 600 determined trail runners the morning of October 3, 2009, for the 9th Annual Rock/Creek StumpJump 50k and 11 miler. Today, Rock/Creek announced that race entries and matching donations from a variety of sponsors raised over $13,000 for The Wilderness Trail Running Association (aka The Boonies). The money will be used in The Boonies’ ongoing efforts to secure access to new trails, maintain existing trail systems, and run great trail races. Specifically, beneficiaries this year include The Cumberland Trail Conference, Friends of the Cumberland Trail, Lula Lake Land Trust, and the Signal Mountain High School Cross Country team.
Winner Joshua Wheeler of the Rock/Creek Race Team came in three minutes ahead of last year’s time for a first place men’s winning time of 4:15:00. Wheeler grew up in Signal Mountain and lives in Boone, NC. Nicholas Selbo, from Chattanooga, TN, came in second with a time of 4:21:53. Third place male finisher, Bryan Dayton came in at 4:34:57. He also grew up near Chattanooga and now lives in Boulder, CO and represents Vasque. First place female overall was Sally Brooking from Marietta, GA with a time of 5:37:28; just 6 minutes shy of 2008’s winning time for females. Rock/Creek race team member and Signal Mountain, TN resident, Jaclyn Greenhill, came in second with 5:45:10 and Emily Ansick of Auburn, AL finished third female with a time of 5:51:39. 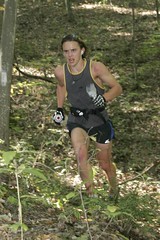 Male Masters winner Jay Curwen from Asheville, NC didn’t quite clear the stumps, resulting in a slight injury on the trail, however, that did not hinder his solid finish time of 4:55:34. Following behind him were male masters finishers John Dove from Georgia with a time of 5:10:48 and third place male and Rock/Creek Race Team Member Randy Whorton from Chattanooga, TN with a time of 5:17:43. First place female masters winner was Enid Gonzalez from Kennesaw, GA in 6:13:48 and second place was Nancy Lewis From Greensboro, GA with 6:58:48. Third place, in 6:59:43, was Lisa Zaccarelli of Nashville, TN.
Runners Theodore Towse from Nashville, Marcus Faudi from Soddy Daisy, TN, and Brad Schneider from Bowling Green, KY took the podium spots in the 11 mile race with times of 1:25:41, 1:26:59, and 1:27:16. The women’s podium included Shanna Hutchinson of Aspen, CO, Elizabeth Callaway of Athens, GA, and Lucie Becus of Franklin, TN, with times of 1:39:37, 1:42:32 and 1:45:42 respectively.
Rock/Creek hosted a vibrant vendor fair and packet pick up the Friday before the race at their 2 North Shore location. As hundreds of racers came through to pick up packets, the general public was invited to browse the latest gear and sign up for giveaways and raffles from race sponsors. After the fair, registered racers enjoyed a catered carbo supper where Laura Fryer from La Sportiva gave away dozens of pairs of free trail running shoes.
Saturday came quickly and beautiful weather awaited the runners as they congregated at Signal Mountain High School for the race start. After a pep talk from race organizers, the 50k and 11 Mile racers were off for a road start to thin the field before they hopped on to narrow singletrack trails. The race was a spectacle of gazelle-like speed, agility, and athleticism, as the top runners confronted challenging descents and climbs. First time racers were surprised by a few unique geological formations with names like Mushroom Rock, Indian Rock House, and the ankle-busting Rock Garden.

The Chattanooga area was represented by the accomplished ultramarathon runner and Rock/Creek Race Team Member, Joshua Wheeler, from Signal Mountain, TN. Andy Anderson from Truckee, CA, brother of 2008 StumpJump Champion and fellow team member, John Anderson (now of Boulder, CO), also grew up here. Wheeler, coming off a recent tibia injury, took a risk to train hard for this race after returning from a medical mission in Africa. He started building mileage in Africa and ramped up his weekly mileage to 100-120 miles a week in mid to late August. “For six weeks I went and found the most technical and steepest trails around. I knew going into the race that Bryan Dayton would be strong; being the 50k National Champion, I knew he was the greatest threat. It has always been a project and a dream of mine to win that race [StumpJump 50k]; I’m thrilled to have a high finish against a pretty competitive field while coming off an injury. It was finally great to string all the training together,” Wheeler explains.
Race Director Jonathan Mobley credited the perfect combination of weather, racers, volunteers, and sponsors for the ultimate success of the race: “Rock/Creek’s StumpJump exceeded my expectations on more levels than I could take the time to explain. We could not have asked for a more beautiful early Fall day. Participants were anxious to get on the trail and were excited by what they had accomplished when they crossed the finish line. No matter what personal goals runners had set forth for themselves, they were all equally inspiring. I would like to personally thank all of our sponsors for their endless support and volunteers for their tireless efforts to make this race a huge success. Looking forward to seeing everyone again next year!”
Now in it’s 9th year running, the Rock/Creek StumpJump is gaining national recognition and prestige as one of the top 50k trail runs in the country, with racers form 20 states in attendance. This year’s race will go down in Rock/Creek Trail Series history as the beginning of something tremendous for Southeast trail running, acting as a magnet for running talents and sponsored athletes such as Dean Karnazes (The North Face), Krissy Moehl and Bryan Dayton (Vasque) and hometown heroes like Wheeler and Greenhill. Moehl, who also represents Patagonia, had just come from a victory at the Tour de Mont Blanc, and decided not to race but was on hand to volunteer.

Top racers as well as raffle winners took home over $20,000 worth of prizes from various sponsors, including tents, sleeping bags and packs from The North Face. All 50k racers took home a pair of SmartWool socks and everyone down to the volunteers scored a technical t-shirt from Marmot. Hammer Nutrition and Greenlife Grocery provided race day nutrition and prizes. Volunteers from Signal Mountain and Ooltewah Cross Country teams helped hand out finishers’ medals and cook hamburgers for the post-race meal. The day’s festivities didn’t end with that meal however, as Dean Karnazes headed back down the mountain after running the race to give another presentation as part of The North Face Speaker Series. A private VIP reception before the show raised well over $6,000 for Lula Lake Land Trust, with money coming in from ticket sales and being matched by Volkswagen, Audi Chattanooga, and First Tennessee. Other sponsors included Lyndhurst Foundation, Georgia Department of Natural Resources, Medium, Talk Radio 102.3, Riverside Wine and Spirits, and Smart|Furniture.
The Rock/Creek StumpJump 50k and 11 mile course would not exist in its current location without the support of the Cumberland Trail Conference, a non-profit organization responsible for trail building, maintenance, and fund raising for what will eventually be a 300+ mile trail stretching across the state of Tennessee. As a beneficiary of the race, the CTC is guaranteed funds for support and published trail maintenance days, so be sure to check with the Rock/Creek Chronicle to plan for upcoming events.
Race sponsors included Rock/Creek, The North Face, SmartWool, Marmot, Vasque Project and BOA Lacing System, Salomon, Hammer Nutrition, Patagonia, La Sportiva, Deuter, Columbia, END Footwear, KEEN, Chaco, Merrell, Greenlife Grocery, Trail Runner Magazine, and Southern Spring Water.
Rock/Creek StumpJump is the oldest and largest of the 10 Rock/Creek Trail Series races. The next race will be the Upchuck 50k in November, then on to the longest trail race in Tennessee history, the Lookout Mountain 100k. For more information on the series, visit: https://www.rockcreek.com/trailseries/
For photography and official results, visit https://www.rockcreek.com/stumpjump/
Photos courtesy Rock/Creek, c. Lucas George (top) and Rachel Tucker (middle & bottom).