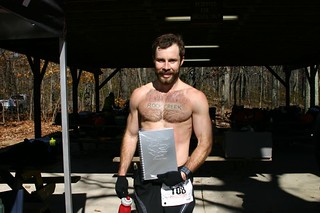 Due to dental surgery, my Veteran’s Day Monday night proved to be less than fun. After a few days off, I tried to run an easy 5 mile jog on Wednesday morning with no noticeable tooth pain. I pushed it more on Thursday with an easy 9 miles. With both my Thursday and Friday runs going well, I felt like I was recovering nicely. This left me with a choice; should I try to get a last minute entry into the Dizzy Fifties Ultra in Huntsville, AL on Saturday or not. After contacting a few friends connected to the race; Eric Charette came through and got me the last slot in the race field of 108 runners. There were three distance options, 50K, 40M, and 50M. I naturally opted for the shorter event given the stitches in my mouth.

I had run this course in 2009 when I completed my first 50 miler. After work Friday, I had my usual YMCA shoulder workout (insert Matt Sims laughing) and then packed and ate some sweet potato wedges my girlfriend, Carrie, had prepared. 9:40pm, I arrived in Huntsville to check into my cheap hotel. It was the first day on the job for the receptionist and it made for a painfully slow check-in. I jumped in bed asap, with the 6:30am race start looming. It would be an early morning, especially since I didn’t have my bid number yet.

After a pre-dawn 15 minute drive, I arrived at Monte Sano Start Park. I parked and got my bid, lucky # 108. Having gotten only half-way situated with my personal self-sustaining aid station, I had to heed the call of nature. There were only two working bathrooms, since a bathhouse building burned down the previous year. The line was very slow moving. I had two minutes to get my GU, Body Glide, and two ripe bananas over to my folding chair aid station.

My car was parked close enough to the start that I could hear the dreaded words, “On your mark, get set, GO!” as I was frantically rushing. I started my watch on this command, and ran to the start line. To my knowledge I have never missed a race start other than this one. Albeit only by about 50 seconds. This predicament made for a fast paced and challenging five minutes of passing and dodging all the other racers. Lucky for me, the race started with a 200 yard pavement section followed by a wide jeep trail, which allowed the required passing to be accomplished.

I caught up to my friend Eric, who was taking it easy so he could win the Magic City half marathon in Birmingham the next day. I assumed there was another group ahead of him, but much to my surprise, he said I was now the leader. Relief… it was a perfect crisp morning in the upper 30’s and I was now in the driver’s seat for the race.

This course consists of a 2.3 mile loop at the beginning, then three, four, or five figure eight loops (depending on the distance you choose) consisting of a north loop and a south loop which total 9.59 miles together. The north loop is up and down and only 4 miles long while the south loop is flat and 5.59 miles. I was now motivated by the fear of being caught by one of the native Huntsville area crew: Dewayne Satterfield, Tim Vinson, or Eric Debolt. Regardless of if or when someone caught me, I wanted to run under four hours for the 50k and every second counted since I started late and was behind.

After some brief confusion regarding which way to turn after both the 2.3 mile loop and the first north loop; I settled into a steady pace. My legs felt decent, despite having run a road 50k six days before. My mind was occupied with memories from the last three years of running since last being on these trails. I had completed approximately 15.9 miles in two hours; therefore was in good shape to run around four hours for the 50k. I was very careful on the start of each north loop to move slowly when descending the large hill to ensure I did not turn my bad left ankle.

The second 9.59 mile loop went smoothly with no major complications. The flat trails of the south loop offered the chance to push the pace and some progress check vantage points since the trails are very close in proximity; like the intestines in a person’s abdomen. This allows the runner to check the status of others who are relatively close behind (within 5-8 minutes). I saw the Huntsville crew on the first south loop but did not see them on the subsequent two loops. As I was starting my last south loop and the final 5.59 miles of the course, I felt confident my desired goal could be achieved by keeping it steady. It is strange how your mind plays tricks on you when you are covering the same course several times.

As I was nearing the final mile of the race I thought I had to run by the stone cabins, which are actually at the end of the north loop. Nonetheless, I emerged from the woods for the final 400 yards of the race comfortably under 4 hours and without anyone breathing down my neck. A memorable victory after a panicked start and a trail 50k PR to boot; 3:56:17. Below is a table that shows my unofficial lap times.