The idea to run back-to-back marathons was born in late 2011, when my buddy Jerry McGwin mentioned the New Hampshire marathon. Somehow the fact that Portland, Maine, holds a marathon on the Sunday following the Saturday which NH occurs came up during a run. My curiosity was piqued, and it sounded like a great challenge to run back-to-back marathons in less than 6 hours. Only one problem: the races are on the same weekend as the Rock/Creek StumpJump 50k.

After checking on the dates, I discovered that since September had five weekends during 2012; therefore the NH and ME marathons were held on 9/29 and 9/30 instead of the first weekend in October. Since there was no conflict with StumpJump, this was my year. 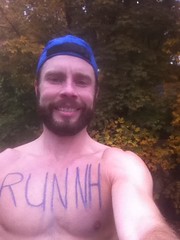 Fast forward ten months and I was flying to Manchester, NH for my personal challenge. After an hour’s drive to Bristol, NH I had arrived at the first battle ground. I had run a majority of this course while in NH for the Mt. Washington Road Race in 2011. The marathon started amazingly late, at 9am. This allowed for sleeping late, and fully digesting the Lara Bar I ate for breakfast. Most of rain had stopped but some light drizzle lingered at the start.

This non-chip marathon had 305 runners in total. There was also a half marathon and 10k option. The 13.1 mile runners were bused out to the halfway point. It made for an interesting first two gradually-uphill miles, due to trying to keep up with the faster 10k runners who started along with the marathon. I was determined not to go out too fast since I had another race on Sunday. I tried to keep a 6:20 pace, which landed me in 6th place.

The lead pack was running close to a six-minute pace. I had a huge inner struggle, constantly debating about picking up the pace to catch the lead pack. Conservative wisdom won, so I ran in 6th position through the cone turn at approximately fourteen miles. I caught a guy around mile seventeen, and passed two others before by mile twenty-three. I was in third place and working hard to advance. I ran my last two miles near a six-minute pace to finish in 2:46:27. A better result than I expected on a tough course with many rolling hills.

Intense stretching, protein replacement, and a shower occurred before the 2+ hour drive to Portland, ME. A late lunch stop at Hart’s Turkey hit the spot, especially the butternut squash. After packet pickup and breakfast for dinner it was time to get to bed and watch the Alabama Football game due to the 7:30am race start. 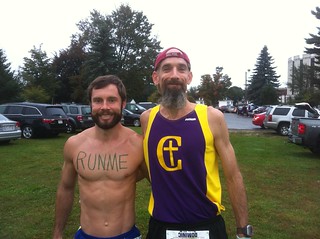 Portland was a much bigger race, with 986 marathon finishers, not including the half-marathon runners. After trouble parking and more difficulty finding a restroom, which resulted in improvisation, I arrived at the starting line. The race was started by a cannon blast that caught all the runners off guard; however Mother Nature was ready as it began raining just as we started.

My sore legs necessitated a slightly more conservative start as the several groups of runners blasted off. I had any easy goal and a hard one, to run under 2:55 or run under 2:50. I got into a rhythm at a 6:30 pace and figured I would just try and hold on.

The route was basically an out-and-back course, the outward part being slightly uphill. I started talking to Laura Johnson, who was running the half and trying for a new PR under 1:25, which put us running the same pace. She split off at mile seven along with all the other half runners. I then ran with the youngster, Andy Fitch who was a local and running his first marathon. We had similar time goals of under 2:55. We moved along in the rain until after the turn around point when Andy pushed ahead as I hit a rough patch of 6:45 miles.

The miles were catching up with me. I had to focus to keep my pace under 6:50 per mile. At approximately mile twenty-three, a friendly soon to be master’s runner came up and encouraged me to run with him since I appeared to be taking it too easy. I acquiesced and he got me fired up, since no masters runner (over 40 years old) was going to beat me!

Approximately at mile twenty-five we began to catch other runners. I gave it all I had and passed four people in the last mile including one guy at the tape. We were both given the same finishing time but I placed ahead of him. I finished at 2:54:43. I was exhausted, but victorious of my goal, two sub-three-hour marathons back to back.

Taking a week or two off after this double would have been ideal. However, the next weekend I made my annual Stumpjump trip to Chattanooga and wisely opted to run the eleven mile course instead of the 50k. After a fast start and some confusion in the woods at the 50k (right turn), got in a rhythm and ran alone in third place. I pushed hard once I got off the single track onto the gravel trail and managed to hang on for a podium finish. It took two weeks of labored easy running before I felt like I had my normal legs back. I have definitely respect for “The Double”.