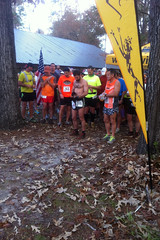 Who would have imagined that it would be over 75 degrees in December in the panhandle of Florida? I can testify that it happened, at the inaugural running of the Blackwater 50k in Munson, FL. Well, I am getting ahead of myself by talking about the conditions at the end of the race.

Munson is a small town with no hotels; therefore I stayed in the vast metropolis know as Brewton, Alabama, which only had two hotel choices. I could have camped at the race site, but I wanted to watch the conclusion of the SEC Championship game.

After a positive outcome, despite the stress at the end of the game, I headed to Huddle House to eat dinner (note: there was not a Waffle House, which is my usual choice, within 25 miles of Brewton).

The race started on Bear Creek Road, which was just over a 30-minute drive from Brewton. I got there in plenty of time to get settled, secure my bib and discuss the course logistics with the volunteers. The race was put on by a running store called “We Run Wild,” which is located in Pensacola, FL.

The 50k course was an out-and-back on some less-than-frequently-traveled routes along the Jackson Trail, between Bear & Hurricane Lakes in the Blackwater River State Forest. The overgrown sections of the trail would play havoc on my watch by frequently resetting the touch screen lap feature. The course was accurately billed as “challenging but relatively flat course along the beautiful Jackson Trail.” (Side note: there is also a 50k relay that takes place on a separate 10k loop around Bear Lake at the same time.)

After a longer than necessary pre-race soliloquy, complete with deer antler props and musket jokes, the race started. I blasted off like someone who stole ice cream from a kid. I was on a mission to win, and secure my forth ultra victory this year, in order to get special recognition from UltraRunning Magazine. I quickly found myself running alone on a Jeep trail.

After a mile or so, I navigated through some newly planted pine trees then advanced to some single track before running approximately a mile on a paved road. I really had to concentrate on the colored blazes that were painted on the trees throughout the entire course. I only got temporarily lost during the first half of the race a few times.

I continued to run at a slightly uncomfortable pace with the fear of someone catching up to me. At some longer vantage points, I felt more docile, not being able to see anyone directly behind me. The course rolled on with distinctive backdrops, including open fields with high grass, wooded areas, and shoreline parts next to a river.

I carried an Ultimate Direction water bottle from the start of the race. I was concerned about hydration, since the temperature was quickly rising into the 60’s and would end up in the 70’s. I quickly re-learned how the blaze trail marking system works, with two blazes indicating a turn. After one hour and forty five minutes of running I anticipated arriving soon at the turnaround point. Anxiously, I pressed on with no turn around in sight.

This section of trail was reminiscent of a Randy Whorton designed trail, with sharp tight turns and numerous trees to discourage speed. I arrived at the half way point, at approximately 1:57, running under four hours was not looking good. My shoe had come untied for the first time. My watch showed my distance was 15.8 miles so had only run half a mile more than needed for a true 50k (31.07 miles).

I reversed direction and within four minutes saw the second place runner, Christopher Knerl. My heart sank; this race was far from over! Soon after the sighting, I twisted my right ankle rather severely, and my shoe came untied for the second time. I was forced to walk for several steps, then progressed at a limp / jog pace. I disregarded the pain and pushed hard, trying to maintain a lead over Christopher. I ran steadily, while enjoying the distraction of the oncoming runners. Having some sense of familiarity helped me to run confidently and quickly for over an hour. Then my shoe came untied again.

The last six miles of the course were a different story. My fears of being pursued led me to panic at a few intersections and run the wrong way. After not seeing blazes, I would retrace my path and get back on track. This happened several times and resulted in me screaming at the trees, since I was wasting valuable time.

I finally hit the last aid station at approximately mile 27-28 and enjoyed the road section even though it was uphill. I turned back onto the trail and watched time grow closer to four hours. According to state forest trail signs, I was two miles from Bear Lake and the finish. I might be able to get there at 3:59. A new aid station had been set up, and they told me it was one mile to the finish.

I was crashing fast due to the heat. An eight-minute pace proved challenging. I took my final GU, hoping to combat the faint feeling that was rushing over my body. Instead of following the jeep road to the finish as I should have, I took a turn onto a white trail that headed closer to the lake. I could hear the finish. I stayed the course and emerged on the wrong side of the finish area. There was a wooden fence that separated me from my destination. I ran in a weak fashion through a gate I found and finished.

I apologized to the race director for coming the wrong way at the end, and assured him I had covered more than 50k as my watch showed 32.23 miles. I was exhausted and immediately had to sit down. After two cups of Nuun and another of water I was beginning to feel somewhat normal again. My body was not prepared for the 75-degree weather I had endured for the last hour of the race. My final time was 4:05:20, which was good enough for the win.

The race was well organized and the aid stations were well-stocked and had GU packets. The footing on the course was primarily good. The main challenge for me was staying on course, since the trail was not heavily worn in, but only increased foot traffic can help that.