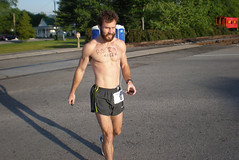 I was hoping the old saying “third time’s a charm” would ring true this year at the 33rd annual Strolling Jim 40, since it was my third straight year to run the race. This is the second-oldest ultra east of the Mississippi (only JFK 50 is older), a picturesque country road course that starts in the small town of Wartrace, TN (population 548).

The race was co-founded by Gary Cantrell, who has quirky sense of humor, as evidenced by the funny spray-painted phrases along the course. This also illustrated by the fact the race is actually 41.2 miles not 40 as the name indicates. The course is only marked every five miles, along with other significant distances (half, full, 50k). Part of the allure of the event is the unique time recognition system, with special finisher’s t-shirts for completing the course in less than seven, six, or five hours. The sub-five-hour shirt has been a goal of mine for two years. Last year, I missed it by eight minutes and fifty eight seconds; this third attempt was going to be my year.

The pre-race pasta dinner at the historic Walking Horse Inn (where I was fortunate enough to get one of the eight hotel rooms) is where I began to question the “charm” motto. My handler, Dewayne Miner, and I joined two other runners for dinner. They were both new to The Jim, and were very interesting people (as most ultra runners tend to be). Tim, who was from Conway, AR, mentioned that a strong female marathoner, Leah Thorvilson, was going to be running the race. He underestimated her marathon PR by five minutes in our conversation, so I was not super concerned.

After dinner, I went to chew the fat with the race director, Mike Melton, about the field of runners. He disclosed to me he had picked me as having the best chance to win in a local newspaper interview (http://www.t-g.com/story/1725179.html). That’s when I started to worry… being promoted as the favorite is the kiss of death! 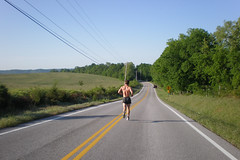 After a restless night of sleep (due to trains and other noises), I got up, ready to run a sub-five-hour race. Before the race I almost forgot to get my timing chip. I toed the line in my Brooks Launch running shoes, which are good lightweight trainers (9.3 oz) from Rock/Creek. I didn’t wait around on anyone when the famous conch shell was blown instead of a starting gun, knowing that I was running against the clock. I had calculated the splits I had to hit in the best, ideal, and worst-case scenarios.

Being a simple guy, I run with a standard Timex watch, and I did not know my pace until the first marker at mile five. My range was to be 34 minutes to 35 minutes; I was at 32 minutes, well above the best-case plan, and I had really been trying to run comfortably those first miles. I continued to run about ten-to-fifteen seconds per mile faster than I had run for my best road 50k last fall. The course is through rural farmland in central Tennessee and I often found myself having the local livestock (cows, horses, dogs) running beside me inside their fence (in most cases) as I cruised by.

I felt good and steady through mile twenty (2:08) which meant I had covered the two largest hills on the course. I hit the marathon at 2:54:54 (6:40 pace). I began to feel the miles, and the 52 degree temperature that we started with had gotten into the low 60s. I continued to hang on as I approached the infamous “walls,” a section of short frequent hills that goes from mile 28 to 34. I was mentally just focusing on the 50k point, which I passed at 3:30 (a minute faster than my previous road 50k PR). I had yet to see or hear of any other runners, and honestly was not thinking about getting overtaken. My next goal was getting to mile 35 where Dewayne was going to park the sag-wagon, and run with me for the last 10k. Cramps had been threatening since the Walls in my quads and hamstrings. I fended them off all race with the use of electrolyte capsules, GU gels, and frequent water. 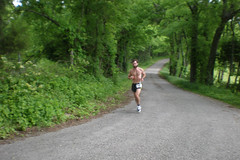 At mile 35 the wheels were beginning to really come off. I luckily had 58 minutes to run the last 10k and still go under five hours. At approximately mile 36, I was overtaken by Leah and her pacer, my Rock/Creek teammate Josh Hite… go figure! By this point I was just trying to put my head down and keep running as I listened to Let It Be on repeat. Dewayne, who is a middle distance national champion at Arkansas and current Alabama state road mile record holder, had to restrain himself to run slowly with me. I ended up running 48:57 for the last 10k (7:53 pace). But luckily I had enough cushion to still run a final time of 4:50:23, achieving my dream of getting a Gold Tee Shirt.

I was the male Strolling Jim champion, but was second overall. No girl has ever won the race, and certainly not run it in under five hours. Leah ran a smart race and had enough in the tank to maintain on those last 5 miles. My hat is off to her. This is a great local event that always keeps you coming back. The weather this year was improved over the last two which consisted of rain and high humidity.