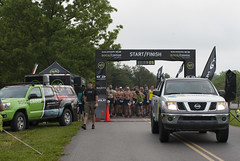 Where to begin? The 2013 Rock/Creek Scenic City Trail Marathon and Half Marathon is in the books, and it was a beautiful day to be in the woods. Raccoon Mountain is a great place to run, and credit is due to SORBA-Chattanooga & TVA for this awesome trail system.

We somehow managed to dodge the looming thunderstorms; the race was run beneath overcast skies, the forest lush with patches of fog and plenty of moisture and humidity! Since this one is often a battle against heat and dehydration for those unfamiliar with running in the southeast, it was a pleasant change. 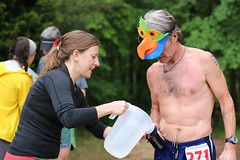 From the start, the marathon was a battle between Rock/Creek Race Team members Nick Lewis and Johnny Clemons, the latter of whom missed the CR by five seconds last year. Midway through the race, Clemons suffered an injury and was forced to drop; Lewis soldiered onward for the win in 2:55:44.

For the women, 42-year-old Meredith Smith took home top honors, and her finish of 3:34:16 is the third-fastest women’s time in race history. Nancy Costilow and Emily Anne Vall, finishing almost exactly one minute apart, round out the women’s podium. 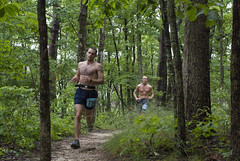 In the half marathon, two-time race winner Daniel Mueller from Nashville, TN made it a three-peat, charging to victory in 1:19:34. He now owns three of the four fastest times on this course! Blake Davenport and Matt Pruitt took second and third; that’s consecutive 2nd-place finishes for Davenport, and a strong showing for Pruitt in his first Trail Series race since StumpJump 50k.

As for Mueller, we look forward to seeing him back for the Chattanooga Mountains Stage Race, where he’ll defend his course record against StumpJump 50k record-holder David Riddle. 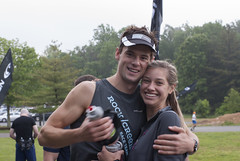 Speaking of repeats, remember Annie Kelly? She won the women’s half marathon last year with a course-record time of 1:36:14… and came back this year to win again and obliterate her own CR! With an absolutely scorching time of 1:30:26, she becomes the first woman to maintain a sub-7-minute-mile pace for the duration of the trail half, and she managed to finish 5th overall. 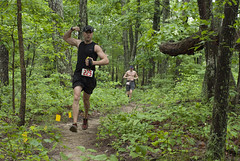 All three women on the half-marathon podium bested the previous women’s CR. The men had better watch out next year!

All told, only 408 runners finished this year’s race (231 half, 177 full) despite nearly 600 registrations. Perhaps the threat of thunderstorms scared many runners away? 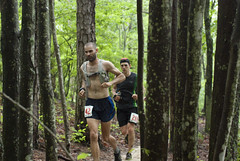 Special thanks are due to our many volunteers, and the generous sponsors who make this race possible. Please support these vendors, all of whom have chosen to support trail running: 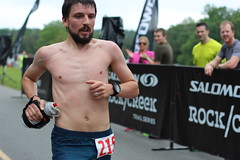 What’s next for the Salomon Rock/Creek Trail Series? Why, our iconic Chattanooga Mountains Stage Race, of course. 60 miles, three mountains, three days. It’s completely sold out, and has been for months, so there’s no hope of getting in — but if you’re in the area, come volunteer and hang out with us!