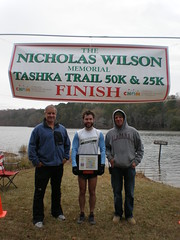 “I knew I had to be on my “A” game when I picked up my race packet and my bib was #1. Having won the inaugural race last year the RD expected a repeat performance. I was more concerned with accomplishing the second of my running goals for the year (100 miler in under 24 hours, and run a trail 50k under four hours). My training buddy, Justin Ladner, was runner the 25k, so I ran with him for the first 5 miles, which resulted in running the first of two loops faster than I should have, (1:52). I turned the pace down for the second loop and just ran 8 minute miles and had a positive split (not ideal). Then I ended up running the last 1/2 mile at break-neck pace to break four hours (3:59:08).

The trail is runable and relatively smooth, but had a heavy covering of leaves. The course is situated around Lake Lurleen located in an Alabama State Park of the same name. The course has 3 boat rescue aid stations approximately at miles 5, 7, and 9 miles into the race. One loop has approximately 3,684 feet of elevation gain, so the 50k had 7,368 ft of gain. The race is a decent size (145 runners) due to the three distance choices, 50k, 25k, and 4 miles. Overall, a great run with good facilities and parking onsite.

Event Summary
-Course is runable, but offered a few technical parts with two steep hills at the end of each loop.
-Organized by Tuscaloosa Track Club and was directed by Walt White and Mike Higgins
-Local / Hometown feel.
-Very cool laser engraved tree logs for the age group awards (1-39, 40-49, 50-59, 60-69, and 70+)
-Overall winner gets a elegant plaque with a course map and engraved metal plates.
-Great burgers, hot dogs, potato wedges, and pizza at the finish and several butane heaters to stay warm.
-Long sleeve Brooks t-shirts for participants.
-50k had 35 finishers.
-25k had 84 finishers.
-4 miler had 30 finishers.
-Note the State Park does charge a $3 per person entrance fee.