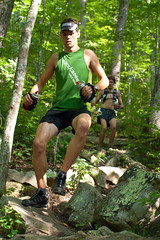 Stage one took place on a cool summer day, high atop Raccoon Mountain. I didn’t know how I was going to feel running the stage race this year, since I’ve been neglecting the trails in order to pursue half iron distance triathlons. I planned on running stage one a few minutes slower than last year; just to make sure I was going to pace myself properly. I also wore a heart rate monitor, so I couldn’t lie on how I was feeling.

I took it easy for the first hour, and then picked it up for a strong last half. I came in a couple minutes slower than the previous year, as planned. I also noticed that there was I good turnout for this year’s race with some folks that weren’t from around these parts.

Stage two was significantly harder than stage one, because of the many long and steep hills. I took it easy to Covenant College, where fellow Rock/Creek Team Member, Kevin Boucher, AKA Paul Bunyan, caught me.

We started a chase group headed back toward Lula Lake. On the way we caught up to other R/C Team Members Lance Steel and Brian Costilow. Lance wasn’t to enthused picking up the pace. He said, “This is gonna be like SAW 6 !”.

Drill sergeant and R/C Team Member Sheridan Ames was on the course providing inspiration, “Pick up the pace ladies, I thought this was a race”. Laughing and running are some of my favorites things. We got back to Lula and finished the business within a couple minutes of each other. 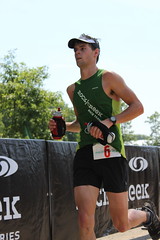 Stage three was by far the most technical day. The Cumberland Trail provides some of the best sandstone and dirt trails around. I took it easy from the start to Suck Creek and back to Mushroom Rock. Then I picked up the pace, passing some people. I backed off from Edwards point to Signal Point. When I turned around climbing the stairs and saw a line of people behind me; at least I would get to the aid station first.

I floored it after I got some much-needed HEED, from the most scenic aid station at Signal Point. You can’t beat those views of the Tennessee River Gorge, man I love Chattanooga. I did a couple of intervals trying to separate myself. A few guys caught me going through Randy Land, and I managed to hang on for a bit, they provided some needed motivation. I was running strong back to Nolan, when Brian caught me, he turned up the heat and I couldn’t hang on to the finish.

I finished the Stage Race with a personal best total time of 8:21:43, for 13th. It was the most fun I’ve had in a while running.

I want to thank Randy and Kris Whorton, Wild Trails, Rock/Creek, and all the volunteers for putting on such a great race. I can’t wait for next year.