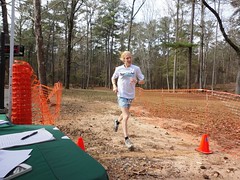 The Pine Mountain trail race is held in FDR State Park in Pine Mountain, GA, conducted by the GUTS running club. I did this race for the first time 3 years ago and really enjoyed it, so I decided to come back for a third time. I was happy to be joined by fellow teammates Sheridan Ames and Dreama Campbell as well as her husband Trey. My wonderfully supportive dad also made the trip to crew for me.

Unlike most races, which are held on Saturdays, Pine Mountain is on a Sunday, so returning back to the real world without a recovery day can be… shall we say “interesting,” because I’m usually hobbling around pretty badly!

Temperatures on race morning were much warmer than I expected, so I was able to start in just a Patagonia long sleeve tee and shorts. It was much colder in previous years, and I was thankful to have some relief from the cold, but little did I know that it would warm up so much that many runners, including myself, would struggle with the heat.

At 7am, race director Sarah Tynes said go, and around 125 runners set off along a .5 mile stretch of pavement before turning into the semi-dark woods. Thankfully, the sun rose within minutes of starting, so I chose not to start with a lamp, but those first few minutes on rocky single track were pretty tricky! I intentionally went out fairly hard, because I remembered that the first 3 or so miles were pretty flat before starting the first and biggest climb of the day. As we started ascending, the sun rose and allowed for spectacular views from atop the ridge.

I was careful not to look too long, though, because the trail is extremely rocky. Those sharp, jagged rocks that seem to just be waiting to bloody the knees of a runner who dares to look away. The trail follows the ridge before descending once again and then climbing right back up to the first aid station at mile 5.6. My dad was waiting for me there, but I still had plenty of fluid, so I said hi and kept running.

As we descended once again, it became clear that the leaves would again be a huge factor. Because this race takes place in late fall, the trail is so covered in leaves that it is almost hidden at times and blends in with the rest of the woods. You literally have to stop and look for flagging to know where to run. Throw in a whole bunch of sharp rocks under those leaves and you’ve got a dicey combination. I knew a fall was inevitable and just hoped it wouldn’t result in too much blood even though there is an actual award given out for “best blood.”

I was able to settle into a nice rhythm and made good time to the next aid station at mile 11 where I refilled and grabbed some food. After each aid station, runners would descend, run a bit of relatively flat trail, and climb right back up to the next aid station. It was nice in a way to know that there would be aid and smiling faces waiting for me at the top of the hills, which seemed to grow as the day went on. I felt pretty good until mile 17 or so when I totally bonked. I had just about convinced myself that I was going to drop at the turnaround. The section leading up to this point is extremely technical with at least 10 creek crossing in less than 4 miles. Thankfully, after reaching the turnaround and running a short loop section, my spirits lifted, and I just tried to focus on running from aid station to aid station.

It was really starting to heat up now, and because of some tornado damage that devastated this area earlier in the year, several miles of the trail were totally exposed to the sun. The unseasonably warm weather also led to some nasty stomach issues for me, and I wasn’t really able to eat anything from around miles 22-34. I did my best to drink regularly, but could tell that I was getting dehydrated. When I reached the final aid station at mile 34, my stomach had finally settled, and I inhaled a peanut butter sandwich made out of a Honey Stinger Stinger Waffle. I swear it tasted like heaven.

I knew we still had one good climb before a nice downhill and flat section to the finish. It seemed like forever to get to the top of that hill, but once the trail started to descend, I got a second wind and was really smelling the barn. With about 1.5 miles to go to the finish, I saw my dad waiting to run in with me. I still had a shot a breaking the female course record and was very thankful to have someone to push me to run hard in the final stretch. However, my stomach was not cooperating and I actually had to make an emergency stop with about .25 mile left.

When I came out of the woods and saw the clock 100 yards across the field, I realized that I had the record by just over a minute. After crossing the finish line, I just laid down in the grass, exhausted and very grateful to not have to run another step. I feel very blessed to have had a good day and owe a huge thanks to all of the wonderful volunteers and the best personal crew man ever (my dad). Teammates Sheridan Ames and Dreama Campbell also had strong runs, and we all enjoyed cheering in each person as they finished a super tough course.

Full results for the Pine Mountain 40-miler can be found here.