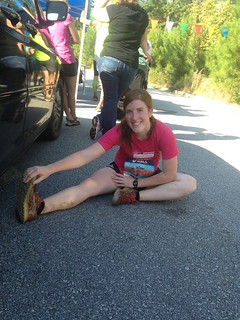 “Taking trail running to an all new low”
by Elizabeth Callaway

To say the least, the inaugural Yeti Trail Race 15K was awesome! It may have been the combination of awesome trails, the great markings along the course, and a relaxing after-party that included tasty craft beer (generously provided by a local distributor), but this experience was somehow less crowded than my most recent races. It was truly a wonderful grass-root experience.

Now the race may not be the exact 15K distance, but the race director measured the course about a week prior to a total of 10 miles and some change. It had a wide variety of terrain. The trail began with a 0.7-mile road start that allowed everyone to get in his or her groove before hitting the single track.

Once on the single track, the course serpentined around and over a small creek numerous times with crossings made possible with scrap wood bridges. After enjoying the smooth bottoms next to the creek, the race picked up the heat with the Horseshoe Trail.

Let’s just say there were so many switchbacks and turns, I almost got dizzy from the constant changes in direction. You could see your competition most of the time; this was a mental game that I had to play right. Once descending the trail back to the creek, you hit The Wall. This rutted-out, monstrous hill preceded the FIVE (yes, FIVE!) power-line hills. I can’t tell you which I preferred more, the steep gravel climbs or the steep, loose descents that had me running slower than on the ascent. This succession of pain did not seem to have an end.

Finally, after the 5th power-line hill, I made a turn into the woods with no clear trail ahead (this being the Yeti Express) with the exception of pink flagging tape that was fortunately present every 10 feet. It was here you straddled Sweet Water State Park’s property boundaries before descending to Sweet Water Creek.

The last half of the race began with flat terrain next to the river and a few rollers thrown in for fun. I expected the aide station to be close, but my estimates were off. After pounding through some major mud, I made it past the creek to the race’s only aid station. The volunteers topped-off my hand-held and I left within seconds to maintain my place. With my water supply back in the green, I continued down the buff, perfectly maintained state park trails-, which were exactly what my body needed after enduring all of the power-lines.

The course then went into a rolling, grassy field with horrible visibility below my knees. Just before hitting the last of the single track, I encountered one more gravel road ascent that would ultimately lead back to the finish. The gravel was marked every so often to indicate the route, and then took a sharp turn back into the woods. It was here that I saw the fringe of suburbia and realized my race was almost complete. I made it around the last switch back and broke free of the canopy into a bright, clear sky. Only a short distance on pavement separated me from the finish line.

Once across the tape, I quickly changed into my post-race attire before heading back to the finish to cheer on the remaining racers and consume a few post-race libations. I didn’t end up leaving the race until everyone was finished running and friends- new and old- had traded race stories over a few brews. Even though the heat approached, the fun didn’t stop until I realized a major sunburn had sounded the alarm to retreat. Thanks again to the RD, Jason, for a great event and wonderful gathering of trail running brothers and sisters.