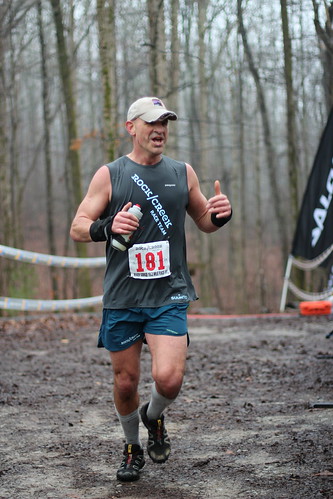 The River Gorge race is truly one of my favorite races ever — it must be, I have run the 10.2 nine times and the 6.5 mile race twice out of the thirteen years it has been held! I have only missed the race twice since the race began in 2001. I have been first and second in the 6.5 and third and fourth in the 10.2.

My fitness has varied from year to year as well with a course PR of 1:20 and PW (personal worst) of 1:32. Regardless of fitness level or placing I just love running this course.

In the very first River Gorge I was there in a lead group of seven runners, which included race team member Sheridan Ames, that made a wrong turn and ended up not finishing the correct route. The very first River Gorge race was in fact, won by a woman, Keri Stewart in a time of 1:28:22. The second place guy, Herbert Krabel, was over six minutes behind in 1:34:36.

I think a number of factors contribute to trail running’s success, including such things as cool swag to the winners, awesome shirts, super organization, great advertising, UltraSignup, chip timing and some of the most beautiful scenery in the Tennessee Valley.

Rock/Creek Races have become so popular that they tend to close up a couple months before they are actually run. I really feel that as more people venture off road, the more popular that these Rock/Creek races will become. It would not shock me to eventually see these races close up four to six months in advance. I have heard very few negative comments about the Salomon Rock/Creek Trail Series since it began. 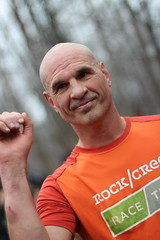 The weather for River Gorge is usually rainy and cool; I do not know why, but it just works that way. This year was no different. I showed up around six A.M to work parking with master of the parking- Michael Scott. I knew to expect rain and donned the appropriate rain gear while directing people where to park their vehicles. Right before race time the rain stopped, and actually became somewhat nice out. I still opted for a pair of arm warmers as I despise ever feeling cold during a race.

I took off quickly, establishing myself in the top ten before we hit the single track. You want to get out quickly in this race before you hit the single track and get stuck behind people. I settled into a decent pace with fellow Rock/Creek Runner Brian Costilow right on my heels.

I am usually pretty comfortable on the trails as ninety nine percent of all my running occurs on the trails, but for some reason I was out of sync and I went down hard, twice, early on in the race.

Each time I went down I got up quickly and soon got back in a rhythm. The beauty of being built like a tank (5’9’-180 lbs.) is that I am not really fazed by such missteps. After my second fall I did reassure Brian that I have run trails before.

Most people talk about the dreaded rock garden, but in reality the part of the race I despise most is when you duck out of the woods and get on the jeep road that makes you climb for the next mile and a half. I absolutely hate this part of the course, as no matter how fast you run it you are pegged at your anaerobic threshold. Right before the rock garden Brian and another team mate, Sammuel Hammonds, dispatched me and took off — gapping me by a couple minutes. I finished in tenth overall and as the first over-forty dude. Soon after crossing the finish line I took inventory of my body. I discovered a nice golf ball sized knot on my forearm. Nice-I thought. It should make doing the Chattanooga Challenge at noon that much more fun! 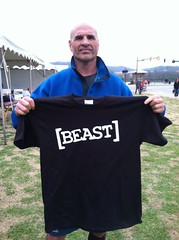 I changed clothes into my other set of race gear and headed out to do the Chattanooga Challenge. When I arrived at the start line I was told I could take off when I was ready. Ready to be done for the day I took off by myself.

As I ran the well-marked course I soon realized that getting a good time would be near impossible as there were big log jams at the obstacles created by slower runners. I settled into a steady pace picking my way through the crowds of people doing the race. The worst event of the day was the stadium stairs at Finley stadium. Challengers were forced to run up and down every set of stairs on the visitor’s side of the stadium.

My legs were not happy but I plodded through knowing I would be done soon. I finally made it back to the Riverfront only to wait ten minutes in line to climb over the Rock City barn. I loved the event and would have liked to run it competitively with no wait at the obstacles.

The challenge was well run with tons of volunteers. I think the event has a future as soon as they figure out how to prevent the log jams at the obstacles. I did receive my beast shirt for doing both the River Gorge Race and The Chattanooga Challenge. I thought that was a nice, cool touch.

After failed career attempts as an underwear model and a MMA fighter Tom Sell eventually settled on a career as a middle school PE teacher and high school cross-country coach. Tom has a B.S. and M.Ed. from UTC. Tom is currently working on an Ed.S. Degree from LMU and will graduate December 2013. Tom can be found a lot on Raccoon Mountain chasing his chocolate lab training partners Linus and Lucy. Questions or comments: [email protected]