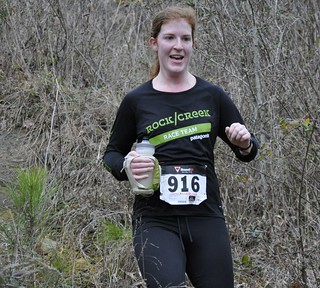 I think it has rained for at least five minutes everyday since January 1st. The trails are in the same condition as my training and school schedule: messy.

Regardless, the start of the 2013 season has me pumped! On February 16, I had the opportunity to run in the Sweetwater Creek Half Marathon, produced by the Douglas County Rogue Runners.

The course was slightly different from previous editions, but the returning veterans assured me that the climbs had not been abbreviated. With the February chill that morning, I had to bring warm clothes and hope that the wind-chill wouldn’t make the creek crossings especially troublesome.

Even though the announcer mentioned this was “no course to PR on,” I took comfort that the podium doesn’t understand time, just rank.

The race began with a one mile paved road descent leading to the trail running parallel the infamous Sweetwater Creek. This allowed all the racers to space out before entering the single track. The trail next to the large creek was very smooth with slight rollers. Yes, it was rocky with loose, sandy ravines in places, but overall the trail conditions were perfect. The course wound around the state park and also included the malicious power line cuts on the park’s borders. The grades of those hills are quite devious.

About the time we arrived at the power lines, the course became a little tricky. While the course had been marked perfectly up to this point, the first power line section was missing its orange tape at the major creek crossing. Luckily, I had done a low-key race on the same trails the weekend before and knew the territory pretty well. Unfortunately, the top male competitors had gone off course and I shouted at them what I thought was the right direction. I yelled the best directions I could and had them climb a steep ravine known locally as The Wall for their second time; they had just descended the steep, loose holler thinking they were headed in the wrong direction. After two additional power line climbs and a lack of orange tape, we made it to the third aid station, which was truly appreciated after all the misdirection.

The last bit of the course was just what I needed in order to finish out the race strong and happy. I glanced back at the last aid station to see the second female approaching, so I had to pick up my pace to ensure victory. Because the course is somewhat shaped like a lollipop, I knew most of the terrain in that it was returning to the previously travelled trail. Little did I know that the course wasn’t a complete lollipop finishing on the road, and instead the course finished onto freshly carved single track that punched with a few climbs that put me at a walking pace. After suffering on a few of these alien hills, I could hear shouts from the finish line and knew victory was in reach.

Aside from the missing tape, I was fortunate to finish in the Top 10 and placed first for women. As the runners filed into the finish, they gathered around the fire to laugh off their detours and share milestones from the race. I met plenty of new folks and several of them have become new running partners. I highly recommend this event for anyone who’s in the metro Atlanta area at this time of year and wants to sample the awesome trails at Sweetwater Creek State Park. Huge thanks to Douglas County Rogue Runners for a great race!