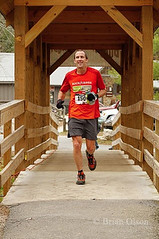 I originally had no intentions of running in this inaugural event. A friend sustained an injury shortly before the race and suggested I use the vacated slot. I off-handedly told another friend I would take it if the Race Director would let me in… knowing that it’s highly unusual for this to happen.

As luck would have it, a few emails among the parties later I was told he was accommodating. So, a few days before the event I was looking at the map to see just how to get to the race and making plans accordingly.

Trail conditions on the website foretold of tough climbs and equally steep descents, combined with lots of rocks and leaves. It even purported to be “one of the toughest 50Ks in the southeast,” due in part to elevation gain in excess of 8000 ft. As skeptical (some will say cynical) as I am about difficulty claims, I counted on a challenging but not brutal day. I can honestly tell you that by the separation (we all started together) of the 30/50K courses at about mile 11, I was convinced he was right and thankful I was only running the 30K.

It didn’t get much better after that, as there was a long pull up a fire road, then a steep climb up to nearly the top of the ridge before a sharp descent down the climb we all took up coming out. At the bottom is your last aid station and the onset of the last climb out of the valley before the short descent to the finish line. It’s this climb that reminds your legs of the meat grinder they were in for last couple of hours.

Finish line is just across a picturesque covered bridge next to a covered pavilion where a finisher’s cap, food, drinks and a warm fire awaited all participants. From my perspective; this inaugural event is bound to become an annual one and will only get better with time. The technical t-shirt and logo were first class as was the finishers’ cap.