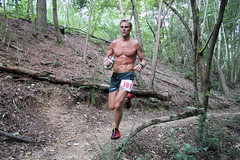 This weekend saw the inaugural running of the Rock/Creek Still Hollow 1/2 Marathon and 10k, and with 336 finishers we really had a solid turnout for the first year of the event! Special thanks are due to Enterprise South Nature Park for closing the park entirely, making this race a reality! A quick recap:

First-time trail runner (and, as it turns out, 1:04 road half-marathoner) Scott Wietecha shocked the field by roaring through the halfway point ahead of every single 10k finisher and going on to beat local favorite Johnny Clemons by over three minutes. He says he likes road runs better, but we’ll keep working on him.

Meanwhile, Atlanta-area Salomon tech rep Kevin Cook took 38 minutes off from tending his flock of Salomon demo shoes and won the 10k with a blistering time. Just behind was Calvin Cofield turning in another strong race.

Anne Falcone was the overall female winner for the 1/2 Marathon, and the Greenwall sisters — Rebecca, then Rachel — finished 1-2 in the 10k. A full list of overall winners can be found here:

We also have a couple of small photo albums available from the race. We weren’t able to take photos of every runner, but we got some nice shots that hopefully do a good job of describing the course conditions and what the event was like. Those photo albums are here:

Need a dose of motivation? Harry Simmons finished our 10k… at the grand old age of 75! The cheer from the crowd while he took his spot atop our podium and pumped his fist was a thing to behold. View the photo here, and be inspired. 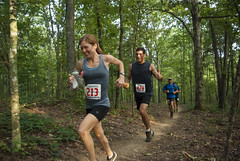 Please support these sponsors of the Still Hollow Trail Race, all of whom have contributed to the growth of trail running in our area and whose involvement makes this race possible: