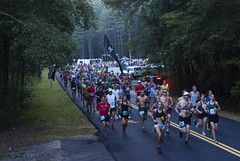 This weekend, we hosted the second-ever Rock/Creek Still Hollow 10k & Half Marathon. This trail race takes place at the scenic Enterprise South Nature Park, right here in Chattanooga, and for the 2nd year in a row we had a great turnout. A bit of early-morning cloud cover kept the temps down… though the humidity couldn’t have possibly been higher!

Salomon-sponsored runner Gregory Hexum won the big race, with a time about a minute behind Scott Weitecha’s winning mark from 2012. Anne Falcone won the women’s race for a second year in a row. Great to see runners back for a second year! 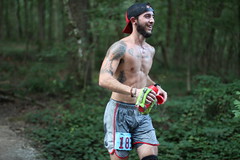 As for the 10k, no one broke 40 minutes this year but Tim Takarta took home the win in 40:55 and Rachel Mason took 2 minutes off her 2012 time to pace the women. Here are full race results: 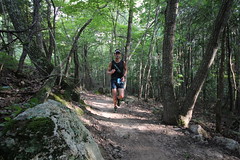 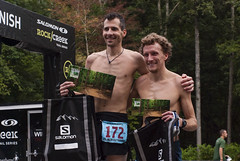 Rock/Creek had three volunteer photographers out on the course, as well. Here are links to those three photo albums:

The next race in the Salomon Rock/Creek Trail Series is the Southern 6 — with Rock/Creek StumpJump 50k not far behind!