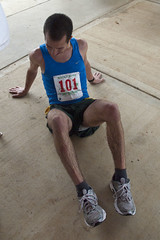 It’s over? It’s really over? Today was the third and final day of the Chattanooga Mountains Stage Race, with 141 runners completing the grueling Signal Mountain course. While Lookout is the longest distance of the three stages, Signal is unquestionably the toughest, with several prolonged stretches of technical, rocky terrain, and the borderline-masochistic staircases heading up to Signal Point.

Daniel Mueller, from Nashville, is a name you’ll recognize if you’ve been following along this weekend. His win today completes the sweep, and in winning all three stages he breaks the old race record by 30 minutes. 30 minutes! David Workman and Daniel Hamilton finished 2nd and 3rd again, sealing the same spots on the overall podium. For the women, Montrail athlete Annette Bednosky saw her own chances for a sweep spoiled by Rock/Creek’s Sarah Woerner, but a second-place finish today makes her the overall winner (and 13th overall!) with a time just barely above 9 hours. Second overall was R/C’s Natalie Sims, followed by Chattanooga runner Leslie Becht. 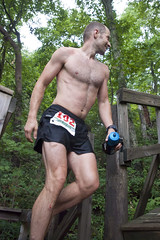 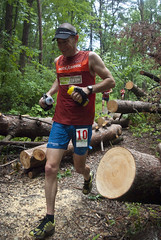 Click here for today’s results, and click HERE for the final Chattanooga Mountains Stage Race overall results. Today’s photos, just as with Stage 1 and Stage 2, have now been uploaded to the Rock/Creek Flickr account. Here’s the photo album from Stage 3!

I would be remiss if I didn’t mention our Rock/Creek Race Team, who not only run many of our races but tend to help out at every opportunity. We’ve already mentioned several… but what about Matt Sims, who ran two stages, finishing 23rd and 13th, while playing “pace car” in today’s race? Or Cathi Cannon, who was 9th overall among female runners who ran all stages? Here is a full list of Rock/Creek Race Team runners who ran all 3 stages, followed by their overall ranking: Daniel Hamilton (3), Kevin Boucher (10), John Wiygul (12), Josh Hite (15), Chad Wamack (16), Sheridan Ames (20), Natalie Sims (21), and Cathi Cannon (59). John Brower ran two of three stages, as well.

We’d also like to send our best wishes to Lance Steele and Aaron Saft, both of whom were injured in Stage 1. Aaron was running in second place when he suffered his injury, and his absence for the remainder of the Stage Race was a conspicuous one. See you guys at the Rock/Creek StumpJump 50k?

Our sponsors support trail running, and trail runners should definitely support them in return. Thanks are in order to SmartWool, Salomon, Montrail, Toyota, Patagonia, Marmot, Hammer Nutrition, Greenlife Grocery, LifeKraze and Archer Physical Therapy. From volunteering time and equipment to arranging post-race giveaways to funding the series, the sponsors make this all possible.