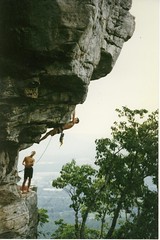 Psst…hey…can you keep a secret?
Two of the nation’s top outdoor magazines rank Chattanooga high on their top ten city lists. How high? Very high. Outside ranks Chattanooga #2 on their Ten Top 21st Century Renaissance Towns, and Rock and Ice gives Chattanooga number one honors as America’s top climbing town. The Outside article cites a revival that began more than 30 years ago when Chattanooga was embarrassed by Walter Cronkite’s prime time label of the city as America’s most polluted. Today that revival continues with the development of an comprehensive urban park system, a unique urban tree planting initiative and the development of hundreds of miles of mountain biking, running and hiking trails in the surrounding mountains.

Rock and Ice’s top nod goes to Chattanooga and claims the city is a “kick-ass rockin’ place to be a climber.” The article cites “bullet-hard sandstone, plenty of new-route potential, and friendly and inviting folk everywhere,” as the reasons that Chattanooga tops their list.

Great news, Right! But keep it quite, we don’t want the masses to flock on the news that we have known all along. Both issue are on our shelves. Come in and check them out!
Rock and Ice’s Top Climbing Towns.