…and she took the time to put together an article and upload some photos for us to enjoy!

One of the few things I knew when I began my travels this summer was that I had 12 weeks with which to play. In addition to working at Rock/Creek, I am also a teacher, ergo: summers present quite the opportunity for me to explore the world around me. I also knew that I was taking my (Jackson) Journey on my journey, as well as my rope and rack (well… half of my rack. I took all of my passive gear and singles in active fingers and hands), and my dog, Abby, was going along as chaperone/copilot/companion/tolerant soul. 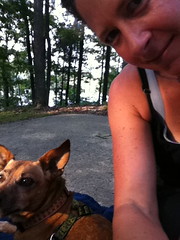 I had a general route in my head that I’d taken the time to briefly map out, but nothing set in concrete, and I knew when I was leaving. Returning: well… that was one of the pieces yet to be discovered.

Presumably because I was a woman traveling by herself (gasp!), many said I was insane for venturing out on such a foray. Others said I was desperate. Still others stated that I was brave. I call bull on all of those descriptors. I was merely doing what I felt in my heart that I needed to do, and blessedly, I had the time and resources with which to do it.

The past eight or ten years had brought with them many challenges that I had, for one reason and/or another, never taken time to fully acknowledge and/or wrap my head around. The opportunity to travel this summer afforded me the time and space to begin that process. That said, I do concede that an open-ended road trip is much different at 40 than it is at 20!

And so it begins…

First stop: Land Between the Lakes.

Honestly, though I have been intrigued by this area from the time I was a child and my father pointed it out to me on nautical charts, this stop served as more of a staging ground than anything else. After arriving at a campsite and getting my gear out and organized, Abby and I went exploring a bit. I debated Journeying (teehee!) onto water, and eventually did, but it didn’t feel any different to me than being on Chickamauga Lake or the Tennessee River. An hour later, the boat is out of the water, supper is being considered, and plans are made for an early departure towards distant bodies of water… 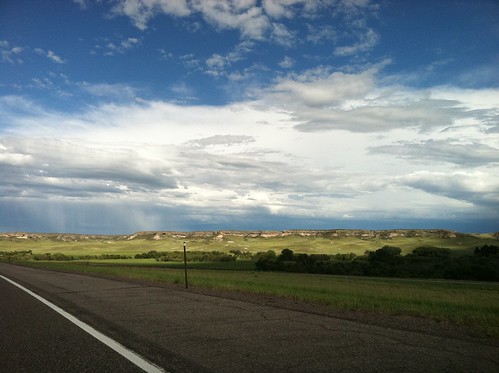 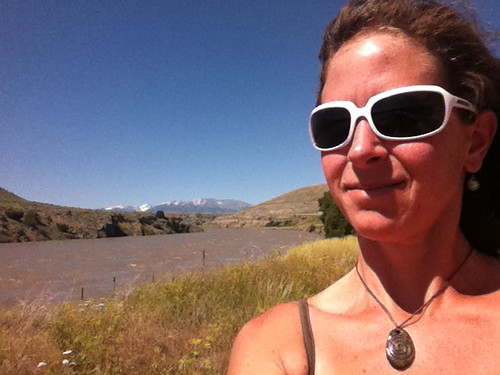 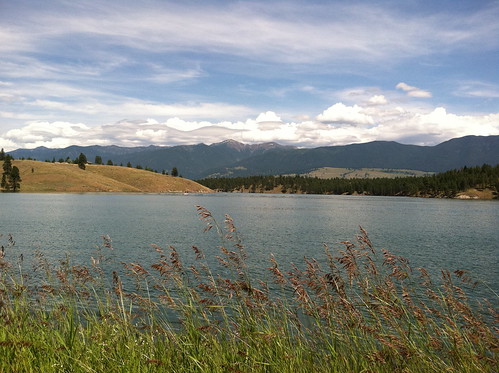 Top left: Meandering my way towards the far northwest corner of Montana from which I would base while making forays into more northern climes, I drove through some amazing territory and was witness to more than a few beautiful light shows.

Right: The road into Eureka, Montana, travels beside Dickey Lake and offers a teasing glimpse of what the waters in this part of the world have to offer.

Below: Later, upon climbing out of the car at my friend Kathy’s home in Eureka after days of driving, I witness for myself the reality of the BigSky… 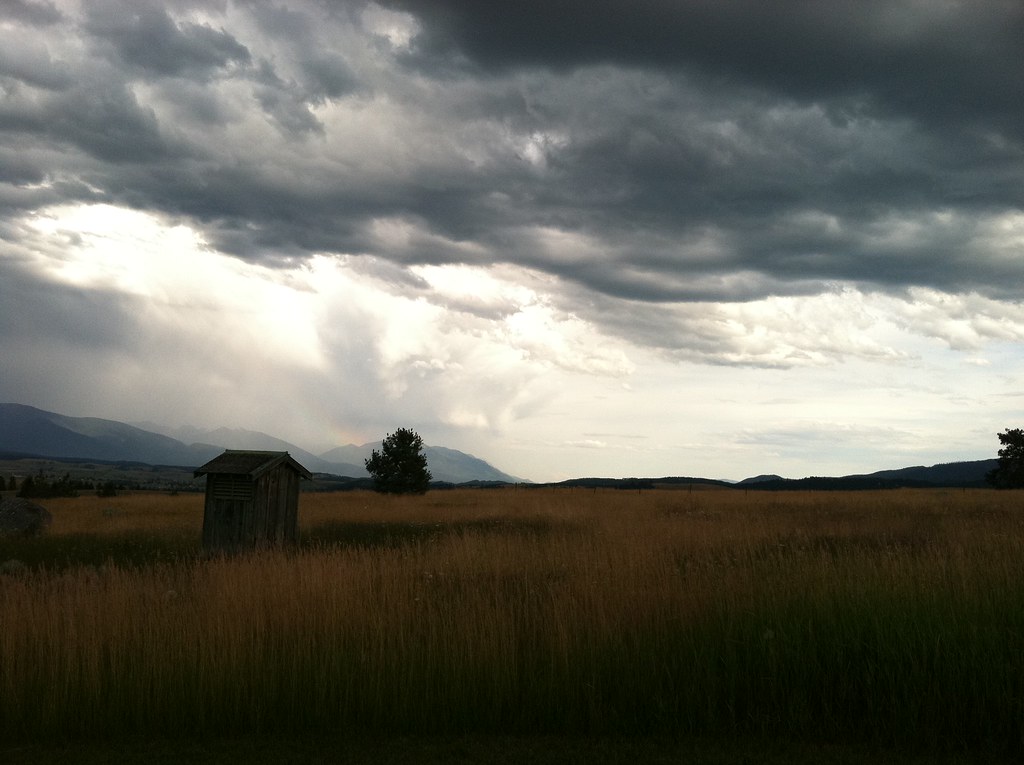 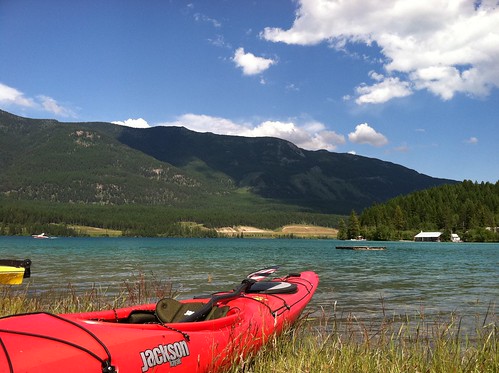 I was looking forward to my first venture into Montana waters via Sophie Lake, but as the Lake was rather swollen as a result of melt water from high snow, AND the local SST was also a victim of the melt waters, sticking to dry land seemed like a GREAT idea!

A more successful voyage was on the surreal waters of Dickey Lake (yes, it really WAS that blue).

Next up: I FINALLY get a stamp in my passport!

The border patrol officer looked at me and grinned when I requested he stamp it, but I think it was the southern accent he was grinnin’ at more than the request for a stamp. Riiiight! 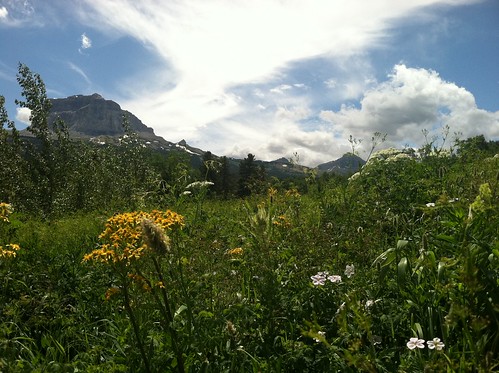 I did find it a little more than intriguing to note that the border between the U.S. and Canada is, yup, a swath cut through the boreal forest…

After a head shake or several coupled with many hours travel through the gorgeous and varying of Alberta, B.C., we come to the Prince of Wales Lodge. Of course, I don’t think to get a shot of the Lodge itself, but I did at least get one of the phenomenal scenery unfolding behind it.

We traveled back across the U.S./Canada border and into Glacier National Park, stopping along the side of the road to enjoy a bit of lunch, while drinking in the amazing scenery of Chief Mountain flanked with wildflowers. The visual treats only got better with each turn in the road. 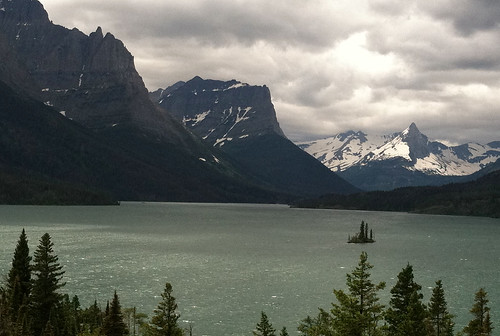 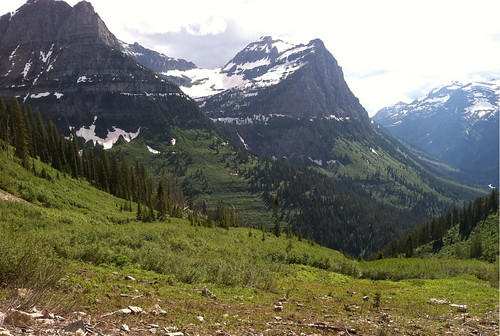 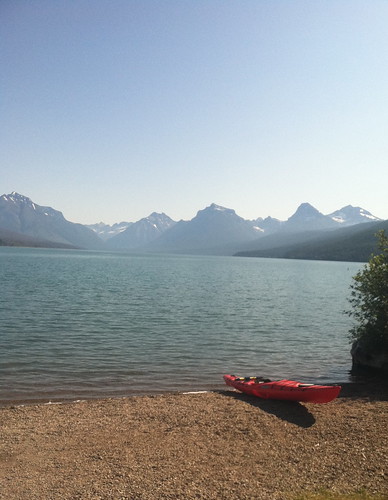 Looking like the True-Touron-From-the-South that I am, I whip out the camera and begin taking pictures!

Obviously, the lower we drove, the less snow there was, but it was still surreal to be playing in snow – and dressed accordingly – the day before my mid-July birthday. I can honestly say I’ve done that only one other time in my life!

Paddling on Lake MacDonald was one of the highlights of my trip. The put-in alone is awe inspiring…

I was silent, completely overwhelmed and moved to tears at the solemnity of all that surrounded me.

I eventually came out of my reverie to realize that I was starving, so we beached the boats and set out to enjoy a leisurely lunch along the shore…

And, as the water was too cold for my southern blood, I forewent swimming in lieu of merely wading. Afterwards, I kick back and continue to soak in the scenery. 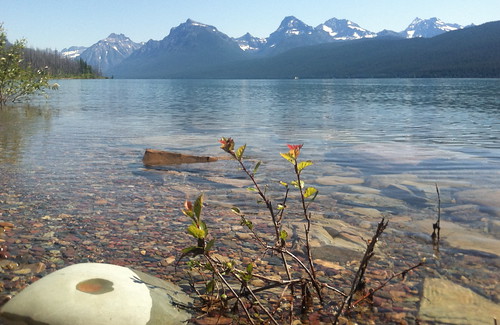 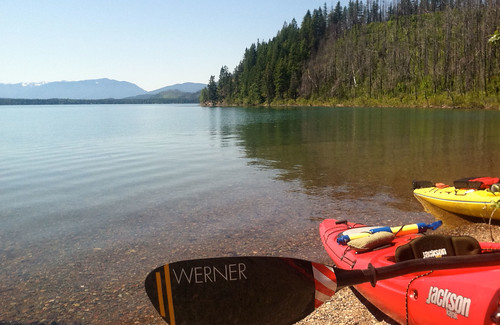 After saying a fond farewell to Montana and the boreal forest, I journey south towards Idaho. On the way, I come upon an opportunity to stretch my legs a bit and venture into an old growth grove.

Rolling into Riggins, Idaho, I run into – of all people – my next-door neighbors (Riggins is a small town, and their rig is kinda hard to miss…!) Camping with them on the banks of the Salmon River, I find myself awestruck (seems to be a trend this summer..!) at the rugged beauty of this gorge. 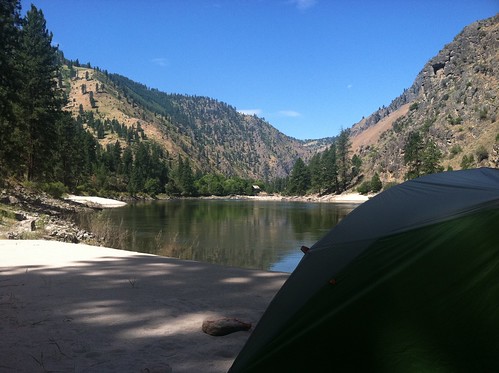 My tent is set up on a high sand bank looking down river, and the stars overhead at night are visible as they never can be back east… Throughout the day, the chuckers (local non-indigenous fowl) serve to provide a white noise that seems to fit the rugged landscape; at night, the coyotes yip and call in the distance. All the while, the river runs it’s course through the canyon, deep and silent outside my tent, yet becoming pushy and noisy as the canyon attempts to keep it in its place.

Another mind-boggling aspect of this particular location is Hells Canyon. An 18 mile drive up a forest service road into the Nez Perce National Forest lie the Seven Devils, the hanging lakes they hold, and the many other secrets that they keep.

A friend I’d met through my neighbors and I hiked into Seven Devils Lake and were rendered speechless. We HAD to paddle this lake, small though it was! 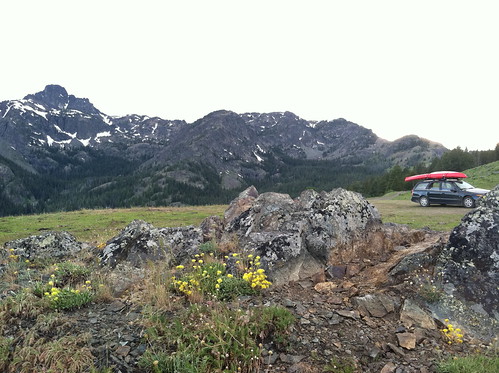 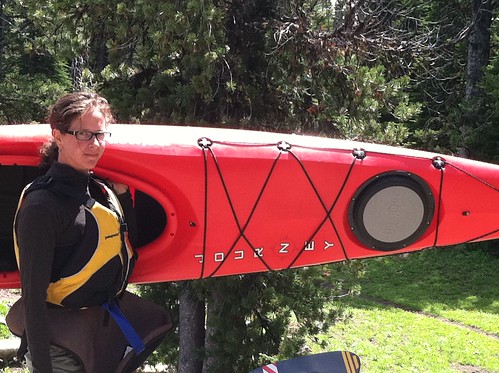 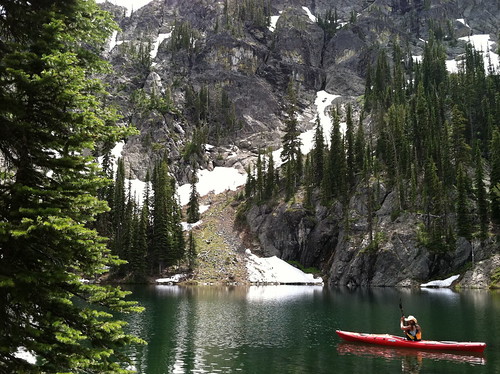 I even managed to convince my whitewater aficionado neighbor Kat (Levitt) to go back up there with me the next day, settle into a non-whitewater boat and check out the beauty up close and personal.

Saying goodbye to Riggins was difficult, but I was placated by the drive around Flathead Lake on my way down to Boise.

Once in Boise, I actually shift gears and head into the vertical world to plug some gear. The basalt I sampled was certainly not the southern sandstone I cut my teeth on, and I found out quickly that the Metolius Curve Nuts are much happier being nestled into sandstone cracks than into basalt!

After climbing, I had the opportunity to check out a few hot springs in the area. I was definitely more intrigued by them than Abby, but we both figured out why they are HOT springs!

The east has begun calling again, my head and heart are reeling with thoughts and ideas and music and tears and memories made and memories forgotten. As I begin to heed the call, I find myself driving across the Bonneville Salt Flats, and am truly in the right place at the right time to meet the pit crew for Chris Carr.

A few more stops along the way home take me through the Wasatch Range, The Spanish Fork River, and into Moab where I hike the Moab Rim Trail rather than climb (it had just rained…) 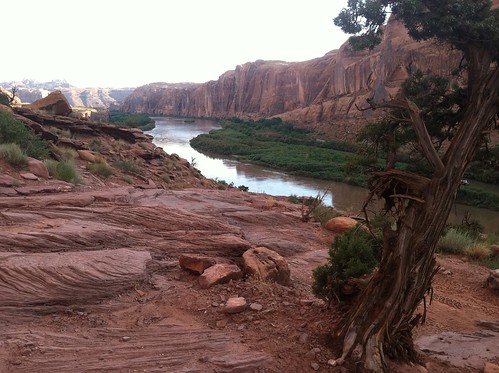 A day or two of camping in the Moab area yielded a trip into the Manti-La Sal National Forest and the serendipitous discovery of Oowah Lake!

Of course, I HAD to throw the boat in the water and check things out on a closer plane.

Abby liked this lake so much that she didn’t want to get off the boat.

I have to admit: It DID feel good to be on the water again!

Driving out of the Manti-La Sal NF & back into Moab, I’m presented with the Mother Lode of desert climbing… the back to Colorado to visit with friends. 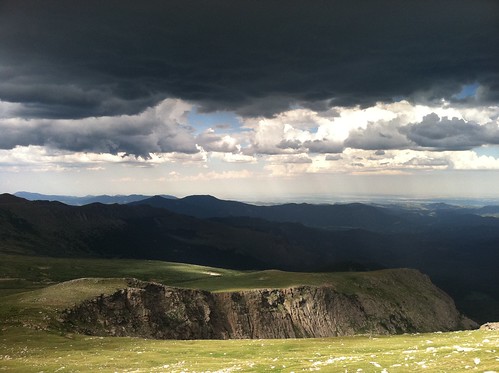 We investigated the Garden of the Gods (again, it had just rained so I didn’t get to climb), stopped to get a shot of the geological plate of a 14er (I totally cheated and drove up!), then Abby and I headed back to Chattanooga and the real world…

When asked about my summer, I honestly answer that it was insightful; exciting; lonely – yet I was glad of the time alone to process all my experiences; exhilarating, yet frightening; awe inspiring; eye opening; thrilling; overwhelming; humbling. For all of these things, I am beyond grateful. I had the chance to learn much about myself, and I know that there is more to learn. I look forward to next summer & opportunities on the horizon. 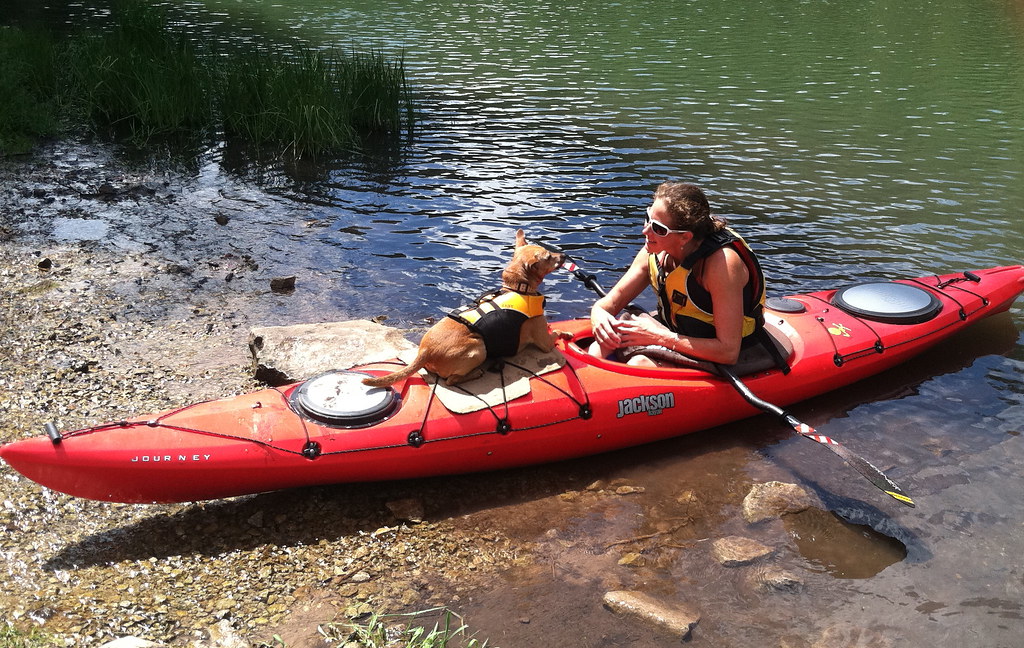 Appendix: Clothing and gear used on this trip

Always with me, regardless of whether I’m traveling or not:

Clothing I brought, which my friends jokingly refer to as ever-present components of my “uniform” anyway:

Climbing Gear (I took all my passive gear and singles on fingers and hands. I also took my rope and rope bag. It’s easier to catch a belay if you’re leading on your own rope!):