Rock/Creek Race Team member Sarah Woerner ran the Mt Cheaha 50k race in Alabama last weekend. Not only did she finish 1st Female (and 5th overall), she set a new Women’s course record in the process, finishing with a time of 5:01:22. Congratulations, Sarah! The following is her trip report from the race: 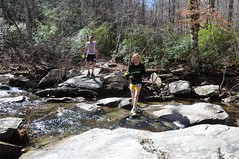 After doing this race for the first time two years ago, I fell in love with the course. It’s one of the toughest in the area but also one of the prettiest and most diverse. Race director Todd Henderson does an outstanding job. The fact that it is point to point makes it even more appealing to me, so I was very excited about getting to do the race for a second time this year. Tyler and Mary were kind enough to let me ride down with them and split a room at the lodge which is also the finish line.

On Saturday morning, runners all load up on one of three buses which take them from the lodge to the starting line. The race has grown a lot in the past two years, so the buses were packed. After making it to the trailhead, we unloaded and it seemed as if everyone made a beeline for the 2 port-a-potties. I swear the line was a mile long! We had about 30 minutes before the 7:30 race start, and because it was pretty cold, I did my best to stay warm by moving around a bit. I knew it was supposed to warm up a lot but it sure seemed cold at the moment. Finally, Todd told everyone to assemble at the start line under a big banner. Runners have maybe 50 feet to spread out before hitting the single track, so if you don’t want to get stuck in a huge conga line you are pretty much forced to go out hard. Also, there is a railroad crossing about 3 miles into the race, and a train goes by like clockwork at the same time everyday about the time that many of the runners reach the tracks. Therefore, this was yet another reason to start out quick and try to avoid the train which delays you at least 5 minutes. Unlike any other race I have done, the signal to start is when the song “Sweet Home Alabama” starts blaring through the speakers.

I went out at a pretty good pace, not overly ambitious, but did manage to get ahead of the crowd. Nevertheless, I found myself in a small line of runners. I was content with the pace until Sally who was just in front of me mentioned that we needed to make a move in order to avoid the train. This worried me because I really didn’t want to lose any time, so I followed her lead and passed the small group until we had clear running room. The first bit of trail is rolling and covered in pine needles, making for a near perfect trail. After about a mile, however, you hit the first climb of the day. It is one of many and we took it pretty hard, still trying to beat the train. After the climb and a short decent, the trail pops out on the road where you run down for about .25 miles, cross the RR tracks and hit the first aid station. Because this was just 3.5 miles in to the race, I ran straight through it and made the sharp left back on to the trail.

Tyler and I ran together for a bit before reaching a dirt road that climbs for about a mile. Not long after leaving the first aid station, we both heard the train and were very thankful to have just beat it. After reaching the road, he took off like I was standing still while I tried to just manage a decent pace and take advantage of being able to run a little faster than when on single track. After what seemed like forever, the hill flattened out and started descending. Less than 2 miles later, I was at aid station #2, mile 8.5. This stop was manned by what I guess were some high school students. A couple of them would dance as you ran by them, and I couldn’t help but laugh. It was great to have them be so energetic. After quickly filling up my handheld, I got back on the trail.

This next section of trail is VERY rocky and narrow in spots. The rocks are loose and go rolling out from under your feet making running a constant test of balance. Also, the trail is cambered, so any stumble at all sends you flying down the hill to the left. After a few miles, though, it gets a lot smoother but there is at least one good climb. I think it was around here that I caught back up to Tyler and Sheridan and ran with them for a bit. The trail then goes back to the rocky narrow stuff before a short out and back to aid station #3. As I was making my way out, I saw John Dove and Marcus on their way back looking strong. I topped off my bottle and headed out, seeing Emily and another female runner making their way to the aid station. We said hey to each other briefly and continued on in opposite directions. I knew Emily was really strong and that there was a good chance she would catch me.

The trail becomes a lot more runnable here as it dips down to the creek and runs along the bottom of the gorge for a bit. You cross the creek multiple times but as there was almost no water, I barely got my feet wet. It soon occurred to me, however, that if we descended to the bottom, we would no doubt have to climb all the way back up to the ridge. Sure enough, after crossing the creek one last time, the trail started switchbacking up the mountain. It wasn’t that steep, so I was able to keep a slow run up it. Not long after reaching the top, I arrived at the mile 18-ish aid station. It was here that I had to fill up with HEED for the first time. I normally drink Gatorade because HEED sometimes messes with my stomach, but this batch was mixed just right and happened to be strawberry flavored, my personal favorite, so I left out of the aid station one happy camper.

Shortly after leaving the aid station, I saw Marcus again, but this didn’t last long as he soon put quite a bit of distance on me. Every once in a while, I could see him way ahead. Although I knew I wasn’t going to catch him, it helped to have someone to try to keep in my sights. After rolling along for a few miles, the trail takes you along the river with some awesome views of little waterfalls. You then have to cross the water. Two years ago when I did the race, it had rained so much that they had to put a rope up to help you get across. This year, I rock hopped without getting my feet wet! After a short out and back along the creek to the aid station around mile 22, the trail goes up a pretty steep hill. All I had eaten thus far was 1 GU and a few orange slices, so I was feeling pretty low, not to mention that my legs were starting to fatigue. I remembered that I had an espresso GU with caffeine, so I took it and felt ten times better in just a few minutes. It’s amazing what a little sugar and caffeine can do for you both mentally and physically! 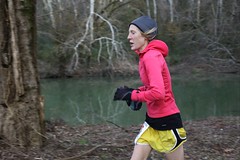 After climbing to the top of the ridge, the trail rolls along for several miles. It was here that I saw Byron and ran/chatted with him for a bit. Runners then pop out on an unpaved road for 1.5 or so. It was totally exposed to the sun which was beating down in full force. Also, you could see for ahead for what seemed like mile. I could make out Marcus and one other runner. The dirt road comes to an intersection with the main park road which is paved, and the course makes a left to head into Cheaha State Park. At this point, I really didn’t mind the road because it was a mental break from having to constantly focus on the trail below me. I also knew that it meant I was getting close to the final aid station at the base of “Blue Hell”. About a mile later, I entered the main park area by a lake and saw the aid station in one of the pavilions. I topped off my handheld for the last time and headed out to begin the tough climb to the top of Mt. Cheaha.

Although there are only 3 miles left at this point, the first mile or so is straight up a trail called Blue Hell because it is so steep and rocky that you have to follow the blue blazes painted on rocks to stay on the right path. At times, you are literally rock climbing. There is no way to run this bit of the race, but given the fact that I had already run 28 miles, I kind of welcomed the idea of walking. I still kept a pretty good pace and was smelling the barn at this point. I managed to pass about 4 people on this section. It was really heating up now and I think the unusually high temps became a huge factor in the race. I talked to quite a few runners who struggled with cramps throughout the day but especially near the end on this portion of trail. After reaching the top of Blue Hell, my legs had decided that they didn’t feel like climbing anymore. Unfortunately, the trail continues uphill for maybe another .25 mile before runners again get on pavement. I ran the road segment at what felt like a good pace and passed by the marker noting that it was the highest point in Alabama, thinking that it must be all downhill from here, right? The course then turns back into the woods one last time for maybe a mile. It was generally flat or downhill, and I knew the finish was close. When I popped back out on the road for the last 200 meters, I rounded the corner and heard a man with a microphone call out my name and welcome me to the top of Alabama. Crossing the finish line, Todd greeted me and shook my hand. I met fellow Rock Creek team member Owen Bradley who won the race in a blazing time of like 4:35. After getting something to drink, I sat down to watch everyone finish and in no time at all saw a bunch of familiar faces all crossing the finish line. We hung out for a bit before heading home from a great day in the woods. Overall, I had an awesome experience and would tell anyone to put Mt. Cheaha on their must-do list of races.

It was a Rock/Creek sweep, with fellow Race Team member Owen Bradley finishing 1st overall in addition to Sarah’s 1st Female. Full results can be found at the Mt Cheaha 50k website.