Rock/Creek Race Team member John Brower decided to put on a trail race — I think this is the second year — and fellow R/C team member Sarah Woerner decided to run in it. She won (of course), and here’s her report! 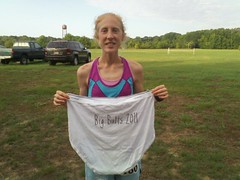 When I opened up the race packet for the Big Butts 50k and saw the giant pair of whitey tighty underwear in it with “Big Butts 2011” written on the back I busted out laughing and new right away that this race would not disappoint.

Rock/Creek race team member John Brower puts on this race which is held at Butts Park in Clinton, MS. The course consists of a 6 mile loop that runners do 5 times for the 50k or 10 times for the 100k.

There is a short road section at the end affectionately named “the highway to hell” to tack on the extra mile or two needed for 31/62 miles.

When my dad and I arrived at the start on Saturday, it was already muggy, and the heat index was predicted to be over 105 degrees! As hot as it has been here in Tennessee, I don’t think I have really had experience running in this kind of insanely hot temperature for prolonged periods of time, so it was somewhat foreign territory. Add to it the fact that I originally signed up for the 100k, and any rational person would call me crazy.

Because this was a loop course, runners came back to the start every 6 miles, making it easy to set up your own personal aid station in addition to the fully stocked one already there and being manned by super sweet Beverly Brower. A few minutes before 8, John assembled everyone and basically said that it was hot outside so drink a ton. He also said that the course was impeccably marked, and if you got lost it would have to be intentional. After saying go, 55 or so runners set off in the woods to run circles all day in what would soon become an inferno.

My goal on the first lap was to get a good feel for the course and idea of how long each loop would take. The trail is primarily geared toward mountain bikers and had a few really short but steep hills in the first mile or two. After that it is pretty flat with only several rollers, almost no rocks, and largely coated in the soft pine needles that make for a near perfect running surface. There was one exposed asphalt section around mile 1.5 and a short power-line section around mile 5, but other than that, the course was well shaded.

At least, it seemed that way early on. A nice breeze was also blowing and the sky was overcast, which blocked the sun for the first couple loops. I finished the first lap in exactly 48 minutes and felt good. After a quick refill of my bottle, I headed out again. As I began the 2nd loop, I thought about my plan for the day. I decided that I definitely needed to drink a full bottle per lap and should probably aim for 48-54 minutes per lap for as long as my legs would obey. 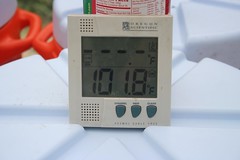 Loop number 2 went by fairly smoothly as I drained all my fluid and finished in right around 49 minutes. I do remember noticing for the first time that it was really starting to heat up now and the sun had burned off most of the cloud cover. The wind had also mysteriously vanished, making the exposed sections of trail downright toasty. I was sweating a ton but felt like I was hydrating well and was pleased with how I felt on the 3 lap, but oh how quickly things can change! Heading out on loop number 4, I started feeling pretty queasy and it was all I could do to force myself to drink a sip of water every once in a while. I also had to concentrate on not puking when I took that sip.

As if the stomach issues weren’t enough, I got some pretty nasty cramps in the intercostal muscles between my ribs as well as my abs. This had never happened to me before but they were so bad I could barely breathe. If you haven’t noticed, the wheels were coming off pretty fast now, and I did some reevaluating. I decided to run the 5th loop and make a decision of whether or not to stop at the 50k or keep going for the 100k based on my status then. 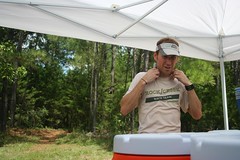 When I got back to the start to begin the 5 lap, my dad offered to run with me, and I was happy to have to company but not in a very good mood since I pretty much felt like doo-doo. By this point, I couldn’t drink much at all without seriously feeling like I would throw up, and the muscle cramps in my abs were getting worse.

About half way through lap 5, I decided that I would call it a day at the 50k while I was still able to run semi decently. I knew if I kept going, things would just get worse, and it would turn in to a hike, something I didn’t want to do for 31 miles in 100+ degree heat.

Coming out of the woods at the end of my last lap, I told Beverly that I was stopping at the 50k, so she directed me out to the “highway to hell” for my last mile. To be honest, it wasn’t as bad as I expected because there was at least some shade. I made my way out to the turnaround at 2 orange cones and back to the start/finish, thankful to be done and not have to run 5 more laps. I walked over to where my dad had set up our aid station and a very nice lady crewing for her husband offered to spray me down with some water out of one of those pressurized sprayers. It felt amazing, and after thoroughly soaking myself, I plopped down in a lawn chair with an ice rag over my head.

Although the terrain itself was not as difficult as a lot of courses, the heat more than makes up for it, and I can honestly say that Big Butts is one of the harder races I’ve done. John and his wife Beverly did an outstanding job putting on this low key event, and I would recommend it to anyone looking for a summer time race, especially if you want to get some serious heat training!