Threatening rain clouds dwindled but the humid air stuck to anything dry as participants ritualistically prepared for this years 4th running of the Rock/Creek Scenic City Marathon & 1/2 Marathon. Nearly double the number of participants than last year, 500 hopeful racers representing 15 states, arrived to experience the flow of trails at Raccoon Mountain Pumped Storage Facility near Chattanooga, TN on Saturday May 22, 2010.
The Scenic City Marathon & Half Marathon started at 8am with a giant pack of runners transitioning from pavement to the woods on single track trails along the perimeter of Raccoon Mountain.

Among those runners was Dane Mitchell from Birmingham, AL. New to the Rock/Creek Race Team, Dane has worked up a reputation in the Southeast as a course record buster. He quietly approached Saturday morning’s race and created some friendly competition for speed hungry locals. “The trails here are really fun, it’s a good race,” says Dane while wiping his face with an ice towel after his Marathon finish. He breezed past the finish line so quickly, most spectators believed him to be a Half Marathon finisher rather than the Marathon.

Dane establishes the new Overall Course Record for the 2010 Scenic City Trail Marathon with a phenomenal finish time of 2:43:22 which is 30 minutes faster than the record time for first in 2009 by Race Team Member, Matt Sims of 3:11:47. Coming behind Dane in Second Place Men’s Overall for the Marathon and a second course record breaking time was Rock/Creek Race Team Member, Nick Selbo from Chattanooga, TN with a time of 2:56:27. Third Place Men’s Overall for the Marathon was Josh Hite from Cookeville, TN with a finish time of 3:00:15 which is again a course record breaking time of 11 minutes faster than the original in 2009. 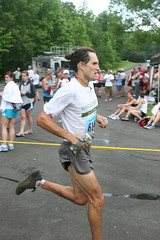 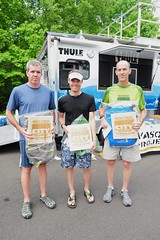 Thank you to our presenters, The Vasque Project and sponsors The North Face, Patagonia, Hammer Nutrition, SmartWool, Marmot, The Wlderness Trails Association, Outdoor Research and Greenlife Grocery and our volunteers.

Full Race Results will be posted and photos from the day will be coming soon.
Check back on the Rock/Creek Scenic City Trail Marathon & Half Marathon race page frequently for updates! More trail races are planned in the Rock/Creek Trail Series! Come experience Tennessee trails with us! Next month, June 18,19, 20 is the Chattanooga Mountains Stage Race >