The exploration of space is largely dependent upon multiple (most often 3) stage rockets for getting payload and personnel into space. There have been numerable successes but there have also been some exceptions. The most recent failure of a Russian rocket losing thrust shortly after liftoff and violently (and spectacularly) crashing back onto the ground is a classic example. The Chattanooga Mountains Stage Race is in many ways remarkably similar.

Here; the runners are the rocket vehicle and they must successfully complete 3 different stages to have a successful race. Unlike years past, it’s now an all-or-nothing endeavor. You sign up for 3 consecutive days of fun and excitement. Just completing one or two races does not qualify you as a “finisher.” Times are cumulative for the events and the lowest combined time establishes your placing.

This is the shortest and easiest day of the three. The trail is moderately rolling with occasional technical and hilly sections. Moderate temperatures and some rain the day prior made the morning much more pleasant and the trail softer than most expected. At this point everyone’s fuel tank is full, and the excitement of the countdown to the start is palatable.

This stage burns as hot and as strong as you would expect for the opening one. Timely aid stations and less-than-blistering temperatures allow the bulk of the field to post fast times without the usual pain and misery that often accompanies such effort. With two more stages to go, this initial launch and stage one seems successful for most. 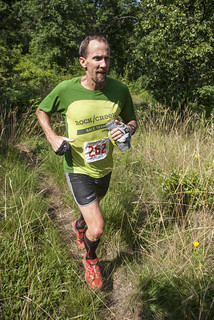 The starting crowd is a bit thinner, less spry and more subdued on this day. It was this stage 2 years ago that I nearly had complete rocket failure with a violent crash landing. I promised myself I would manage fuel flow better this year. Weather again cooperates and almost feels cool. It’s not long before you run by one of the most beautiful waterfalls in the southeast and soon start a near vertical climb up the side of a cliff and sweat begins to pour out of you like water over the falls. So steep, in fact, you have to use the rope handrail to make it to the top.

Once there it’s a long steady climb up along the ridge with a breathtaking view of the valley to your left. Seemingly miles later you plunge back down into the valley, back up the other side of the ridge where you are either climbing (often so steep that walking is difficult) or rolling down hills. It’s then back to the start/finish area for a reverse loop of the one at the beginning of the day.

This time, however, you get to cross the small river (size varies during rains) after experiencing the beauty of the waterfall one more time. The water temperature is always a refreshing welcome experience. One year I lost almost 10 minutes “refreshing” myself here.

You can hear the finish line from here and that’s a great thing because your shoes are soaked and legs spent at this point. You get great trail conditions today, but the hills make for a very challenging day no matter what your overall pace. Post-race atmosphere is the very relaxed with a copious amount of fermented beverages and delicious food provided and subsequently consumed.

This is not only the longest of the 3 stages, but also the most challenging. The terrain is rolling to very steep as well as miles and miles of very rocky (always wet and slick) and root-covered technical trails. Add to this the fatigue, injuries and post-race overindulgence from yesterday and it makes today as tough as a Waffle House pork chop. Looking at the number and condition of the starters today, it’s clear that there have been several stage burnouts and a few damaging crashes with burns. 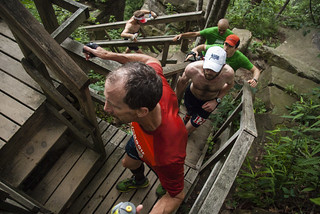 Nevertheless, pace after the first couple of miles seemed crazy fast. The next series of very steep hills must have taken the fire out of a number of people’s legs as I managed to collect and pass a number of runners on a rolling section across the ridgeline on the way to the water station at Edward’s Point.

You get a stunning view of the river gorge here and it’s genuinely worth stopping for a few seconds to take a look. The upcoming miles are among the gnarliest trail sections of the day, generally narrow singletrack with steep ascents and descents with sharp, irregularly shaped, loose, wet and slick rocks.

Despite the difficultly of the near-vertical stairs leading up to the aid stations at Signal Point, they are a welcome sight as you know that section is behind you. Here, you again have the opportunity to get a fantastic view of the Tennessee River below.

It’s only a few miles later you have the most technical section of the series. It’s not all that long and it’s a golden opportunity to punish the person who has been pacing behind you all day. Or be on the receiving end if you are not a technical runner. Once through there it’s a serpentine labyrinth trek along a creek bank to the last aid station and the final few miles to the finish. And beyond seeing my wife along the trail over the last few days; the finish line is the most-welcome sight of the long weekend.

At face value, the total 60 miles does not seem all that daunting until you realize that it’s really three consecutive days of 20 mile (for the most part) all out races. It’s stringing that consistency out over the stages that makes you a Champion on Signal Mountain, not necessarily how you did individually on stage one or two. That rocket has to get through all three to get there while managing fuel load, weight, weather conditions and successful stage separation to go on to the next. As evidenced by the number of finishers compared to the starters, there were some terminal failures. That said, this years overall field of participants was in my opinion the most talented and fastest I can recall.

Race organization was superb. Aid stations were frequent and well stocked. Post race food and beverages were varied and delicious. Race swag was plentiful, useful and of high quality. Innumerable volunteer hours were spent getting the trails in shape, the courses marked and aid stations set up. For those of you that have not volunteered to help at similarly run events need to. These folks work a lot of hours, often with more effort then you have to expend when running the event. Never fail to thank them when you see them on the race course or in your on line post race reviews and or comments.